andrewwski wrote:
Lake Erie-Niagara has it's own B division regional - this year it's March 4 at Waterfront Elementary School in Buffalo.

Ok. How recent is this? Several older threads have no mention of it.

At least since 2003. Probably before that - but I don't have any direct knowledge prior to then.

Back in the early 2000's it was at Buffalo State College, then it moved to McKinley HS for a while. It was at Bennett HS for a couple years in the late 2000s/early 2010s and has been at Waterfront Elementary since.

Ok. It's absent on the OP of some previous years' threads, that's why I asked (considering the thread length, I didn't try to search for anything in the replies).
Userpage
Chattahoochee High School Class of 2018
Georgia Tech Class of 2022

Hmm, I'm going to put up some rankings for fun discussion and hopefully nobody gets angry at me:
1. Columbia High School
2. Ward Melville
3. F-M
4. GNS (assume GNS has their A game...still don't know if they can even overcome FM then, but stuff like that has happened with HHHE or Syo before...still don't know, though)
5. Mount Academy (they've been pretty consistently around here, right?)
6. HHHE (this is up for debate, and I don't know how much they do/don't stack anymore. But they have gneiss! I fully admit I could switch 1-5, 6-10 around a lot)
7. Syosset (I really want to put them in 6th, but I have no idea how much they're pushing it. I think they could realistically reach 6th, but I never really paid attention to how HHHE/Townsend Harris are doing, so I'll be assuming that bombs will keep them lower but better than Kellenberg/Chaminade based on invites/regionals)
8. Townsend Harris (Well, I don't know how to compare NYC v. East Nassau, but it seems like they had a few more bombs?)
9. Kellenberg (Chaminade could go here, but...idk! Regionals scores + lots of invites?)
10. Chaminade

I also would like to note the definition of a dark horse is someone we don't know much about, but they win anyway. I keep seeing "dark horses" in conversations. Realistically, I only recall Mount Academy (probably because I didn't pay attention the past two years >.>). Still, GNS we knew from their middle school, HHHE/Syo have done well forever, and Niskayuna...I don't know much about XD. But I think they've been around a while? I wish I knew them better :/. Can't wait for this to all mess up as it always does

In terms of real dark horses, I would say Brooklyn Technical is the one. I don't know if they've ever gotten into the top 10, or how much talk there has been about them (I should pay more attention again). The top was close at NYC, and they had their C team with some decent builds. Seems like some teamwork could shoot them into a top 10, though I don't know how far.
B: Crave the Wave, Environmental Chemistry, Robo-Cross, Meteorology, Physical Science Lab, Solar System, DyPlan (E and V), Shock Value
C: Microbe Mission, DyPlan (Earth's Fresh Waters), Fermi Questions, GeoMaps, Gravity Vehicle, Scrambler, Rocks, Astronomy
Grad: Writing Tests/Supervising (NY/MI)
Top

Good luck to everyone in B-division regionals tomorrow, can't wait to see who will be attending states this year! (except west Li, they're on the 18th)
i can't feel my arms wtf i think i'm turning into a lamp

Congrats to everyone today, and best of luck at states!
(Speaking of which, anyone interested in doing a scioly meetup at states?)
i can't feel my arms wtf i think i'm turning into a lamp

Any other Regional results from yesterday? I know NYC and Long Island were held but any others?
Top

Very cool to see 5 middle schools from NYC competing at States this year!

Thank you Coach. Good luck in your future Olympiad career!
Here are the final standings: http://www.newyorkcityscioly.org/events.html 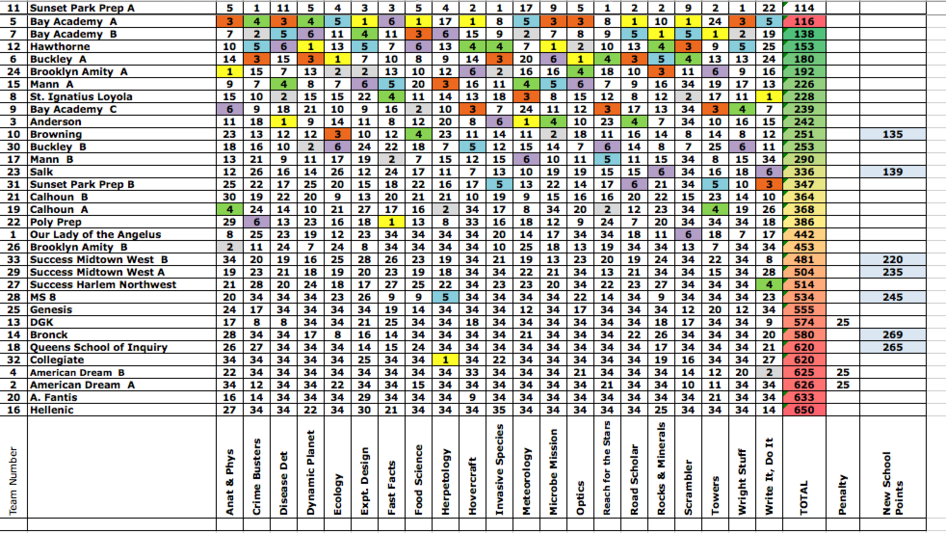 Return to “2017 Invitationals, Regionals, and States”

Users browsing this forum: No registered users and 2 guests