Glad changes look promising. 1 mm wing incidence seems like a small amount unless there is a decent amount of negative stab incidence. But test flights will sort this out. We usually start with slightly excessive decalage so that the airplane will stall and then gradually reduce till short of a stall. Prevents diving and potentially damaging prop.

Also, I’m thinking that increased launch torque will translate to increased climb height and contact with the rafters if the low decalage angle needs to be increased. We usually test a new trim with very low launch torque and gradually (flight by flight) increased launch torque till just under the rafters. Always winding to the same maximum torque (and approximately the same maximum turns; actually, a few more turns each use of a motor, and fewer backoff turns for each flight in order to incrementally increase launch torque). Using this incremental approach, my teams have never had significant damage to airplanes. My four HS teams build a total of sixteen airplanes each year with zero attrition.

Here is a link to a video which shows an example of the standard practice used by experts for winding the rubber motor of an indoor duration stick model airplane:

In the video the rear end of the rubber motor is connected to a torque meter which Bill Gowen is monitoring as he winds.
Top

For well-established indoor AMA classes like Limited Penny Plane (LPP) there are rules of thumb known in the indoor free flight community for sizing a rubber motor that will yield maximum flight times. For example, the rules for the LPP event set a minimum weight for the model (excluding rubber) of 3.1 grams. 70-80% of the LPP model weight is a good starting point for the weight of its rubber motor. But the LPP rules allow a 12-inch diameter prop and relatively large span and chord limits for the wing and stab. A WS 2020 airplane weighing 8 g wouldn’t fly very long with a 5.6 g rubber motor (70% of 8 g). The relatively high wing loading and the tiny prop of a WS 2020 model probably dictate a rubber motor weight well below 5.6 grams to achieve maximum flight times.

I have not built or flown any WS 2020 airplanes so this is just a guess, but I am thinking a rubber motor weight of somewhere in the range of 2-3 grams might be optimum. Again, this is just a guess and optimum weight would depend on the configuration of the model, i.e. biplane or monoplane, and the design of the prop. I can anticipate problems in “managing” a very long rubber motor if the hook-to-hook distance is insufficient. In other words, a very long rubber motor may bunch at the front or rear end of the motor stick during the flight, causing a dive, a stall, or a locked prop. Depending on the length of the motor stick, it may be necessary to utilize a shorter, and therefore lighter, rubber motor (e.g. 1.5 grams) in order to avoid rubber motor bunching problems.
Top

That flight in the video looks like a 2019 WS plane and shows we have a lot to gain: our 2019 plane and winding technique looked similar on quick glance, but our highest time under 2019 rules was 2'17", a full minute less!

In the recent (2020 rules) video we posted with 1'37" duration, we had 2.9 grams of 1/16" rubber for a 32" motor and hook-to-hook 18". If we get down to the last knots, the motor will juuuuust fall off the hooks as the plane lands. I'm sure there's room for improvement, but that could be a decent starting point for some folks, and might spare some reinventing of the wheel.

I measured our decalage better. Both planes are identical, so at least we're building consistently: the wings are +0.9mm at the leading edge, the stabs are +4mm at the trailing edge, so almost 5mm total. I hope with the new longer tail moment (5x wing chord) that we can tweak the CG aft again and reduce the stab's angle (drag) yet still sustain a hit and recover. Preliminary in-home tests are encouraging but if we climb too hard at launch and land flat, we'll keep the same total decalage but put more of it in the wing so we can fake having some down thrust (that's easiest for our design).

The only other thing I can think of is to extend the motor run by reducing initial rpms with more prop flaring, but our yogurt pot blades are too stiff to flex much even when glued at their trailing edge. At least they look the part, unlike our initial props which looked like toys: 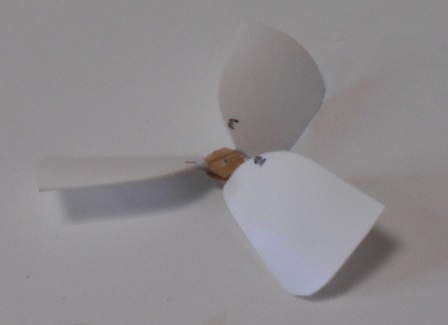 We're close enough to our final design that I went ahead and made Luke 2 kits that provide him the balsa parts, covering, and the prop/hub, along with templates so he can reliably build planes that abide by the WS construction rules. That will spare him (for now) having to learn how to choose balsa, make the props, etc..., and allow more time for the tasks he absolutely needs (winding, ceiling management, trim troubleshooting, etc...): 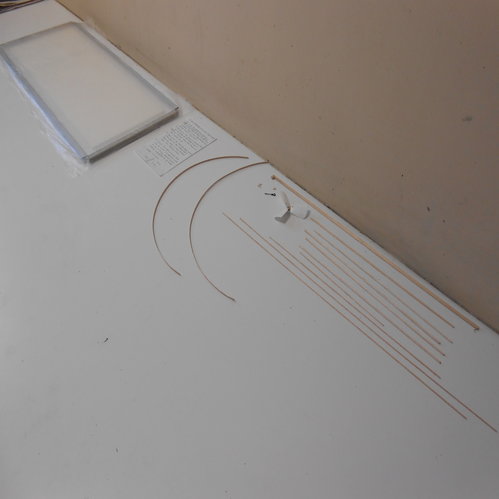 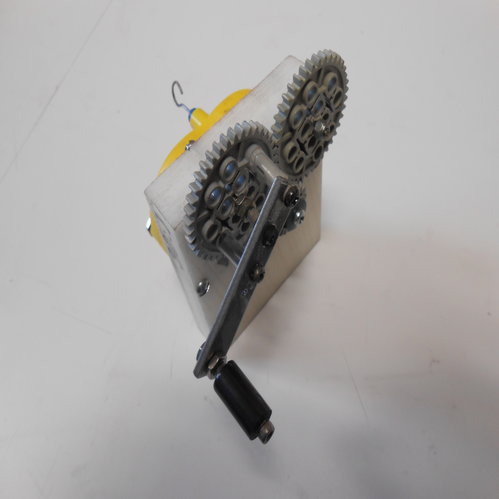 Would it be a good idea to provide some downthrust to compensate for the unbalanced high lift of the biplane? I remember last year we had some accidentally due to a break in the front hook attachment which we discovered later. Ascent went smoothly if launched at an angle but the descent was faster since the prop lost sufficient power for lift and was angled downward.

That was mentioned earlier and is indeed where we ended up at the end of today's trim session. The motor and stab are at zero, and the wing is at 4mm so we faked 2.9 degrees of down thrust. Rudder setting is equal both ways and the wings are back to being centered (no more left offset). The wing leading edge is at the middle of the motor stick for a conservative CG and when we flew the plane into our hands on purpose, it would recover just before touching the floor. Because everything is at zero except the wing, the plane is easy to reproduce and a new plane should be close to trimmed right away.

The best back-to-back right and left flights last week with only a rudder change were 1'03" right and 1'19" left.

The videos were during the process of increasing the wing incidence and decreasing stab trim (for net down thrust) so the launches were still erratic. That's still a total improvement of 14", and the discrepancy right and left is 6 seconds smaller. We wound the rubber to the same conservative 3000-3300 winds and same launch torque as last week to isolate airframe improvements. Some flights pulled like a freight train after launch and got to the rafters, but not consistently and we didn't realize till we got home that the incidence shim had cracked loose

ahahha
it's not about the medals; go out there and have fun. make progress, learn a few things, have one heck of a time, because that's all that matters.

You might check the description of the event, I think you'll find 'free flight' rules out any external controls. Pretty much any active controls too.