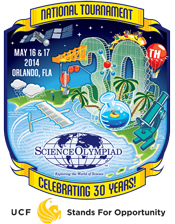 The 2014 National Tournament was held on May 16-17 at the University of Central Florida in Orlando, Florida.

The tournament celebrated the 30th anniversary of Science Olympiad.

Teams That Have Qualified for the 2014 National Tournament & Results

1: Science and Arts Academy was originally placed at 18th. However, after a scoring error in Water Quality was discovered, they were awarded 14th place. There was no tiebreaker with Shady Side Academy, and both were awarded 14th.

B Division: Science and Arts Academy from Illinois