This page refers specifically to starburst galaxies. For other types of galaxies, please see Astronomy/Galaxies and Astronomy/Active Galaxies.

Starburst galaxies were a topic for Astronomy in the 2019 season.

A starburst galaxy is a term used to refer to any galaxy with a star formation rate up to 100 times greater than a normal galaxy. This rate is high enough that if this rate were to persist in the long-term, the star's reserves of gas would deplete in a small fraction of the galaxy's lifetime. For this reason, most starburst galaxies only stay that way for a short period of time. Starburst activity frequently arises when two or more galaxies interact with each other. Starburst galaxies are responsible for a sizable fraction of the universe's star formation.

The high activity areas can be spread throughout the galaxy, or concentrated in a small area. Typically, starbursts are observed around the nucleus of a galaxy. 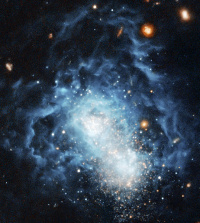 A picture taken by the Hubble Space Telescope of IZw18, a BCG.

Blue compact galaxies (BCGs) often have very low masses and no dust. They also have a very low metal content and are often blue in color. Most BCGs show signs of merging or close interactions, and they can be of any age. Blue compact dwarf galaxies are small BCGS, and Green Pea galaxies are small compact galaxies resembling starbursts. They are oxygen-rich, and no more than 16,300 light-years across. Green Peas are exclusively star-forming rather than having a nucleus. Green Peas are considered relatively rare objects.

Luminous infrared galaxies (LIRGs) are galaxies with luminosities over 1011 L☉. They can also be referred to as submillimeter galaxies (SMGs), though they are typically known as LIRGs because of the large amount of infrared light they emit. These galaxies typically create around 100 new stars a year, which results in the high level of infrared light. However, this may also be caused by an active galactic nucleus (AGN). An AGN is a region at the center of a galaxy which has a very high luminosity, such as a quasar. LIRGs were discovered in 1983 by the Infrared Astronomical Satellite (IRAS). LIRGs emit around as much energy as quasars, but as they are not visible to the naked eye it is harder to detect them. LIRGs are brighter in the infrared because much of the visible light they give off is absorbed, resulting in it being given off as infrared thermal energy.

Wolf-Rayet galaxies contain mainly Wolf-Rayet stars, which are high-mass post-main-sequence stars that come from the more massive O stars. The stars are Population I and contain broad emission lines from dense, high-velocity winds. The lines create a bump called the "Wolf-Rayet" bump at 4650-4690 angstroms that allows one to detect them in galaxies.