For 2013, the Astronomy event will focus on stellar evolution and type II supernovae.

There are a few concepts that you should be familiar with before you can fully understand the mechanics of Type II Supernovae.

Electron Degeneracy Pressure is a direct result of the Pauli Exclusion Principle, which states that no two electrons can occupy the same quantum state at the same time. Because of this, electrons that are packed very close together experience a force preventing them from getting any closer. However, gravitational force continues to be directed inward, so the electron degeneracy pressure is directed against this to prevent a gravitational collapse. As the gravity increased, electrons move to higher and higher energy levels to compensate, causing them to move faster than normal.

There is a limit to which the electron degeneracy pressure can work. Eventually, the gravity is too great for the electron degeneracy pressure to overcome, since eventually the electrons must be moving at or above the speed of light to balance it, which is impossible. The mass at this point is around 1.44 solar masses, and this is what is known as the Chandrasekhar limit. Above this limit, white dwarves will undergo gravitational collapse and result in a Type Ia supernova, but it can also cause the core of a massive star to collapse, triggering a Type II supernova.

A diagram showing the layers in a massive star as it fuses silicon to get iron at its core right before a Type II supernova collapse.

Type II Supernovae result from the collapse of massive stars, resulting from the collapse of the star's iron core. This usually occurs once the star starts fusing silicon- the end product is iron, which burns through fission rather than fusion. This results in the formation of a series of layers within the star. When the iron core reaches the Chandrasekhar mass limit of about 1.4 solar masses, the electron degeneracy pressure (in layman's terms, the unwillingness of electrons to be squeezed into a smaller and smaller space) which had kept it from collapsing before then, isn't enough to hold the core up. Protons and electrons in the core are forced together to form neutrons and neutrinos. The neutrinos produce a huge outward force simply because there are so many of them (they don't usually interact with regular matter). The force can not be successively countered, and the star will implode and send off a shockwave that becomes the supernova explosion.

Meanwhile, the outer layers of the star fall inward, due to gravity, as the core collapses. When the core stops collapsing because of neutron degeneracy pressure, the outer layers crash into the core and "bounce" outwards, creating a shock wave. Along with the outward pressure from the neutrinos, this shock wave is what causes the star (except for the core) to blow itself apart in a Type II supernova.

"Massive" stars generally need to be at least eight solar masses to be categorized as such, though much more massive stars are known to exist. The theoretical maximum mass for a star is defined through the Eddington limit, though there have been observed cases that seemingly break it. The more massive the star, the faster it will go through the stages of fusion and eventually collapse.

Because massive stars are metal-rich (they're the only ones capable of even fusing and creating most metals), they tend to be Population I stars, located in Open Clusters, where there are younger and more metal heavy stars. As a result, Type II Supernovae are generally thought to occur in Population I stars and Open Clusters.

Type II Supernovae are categorized based on their light curves, as detailed below. However, there are various characteristics that have been determined to be related to the variation of supernova they will undergo.

Type II-p supernovae are expected to occur from stars that are up to around 90 times the mass of the sun and have a high metallicity.

Type II-L supernovae are expected to occur from stars of around the previous mass, but with a lower metallicity.

Type II-n supernovae are supernovae that have narrow Hydrogen lines in their emission spectra.

The results of a Type II Supernova are either neutron stars or black holes (explained below), along with a supernova remnant. The energy and mass that make up a supernova remnant spread out and become a part of the interstellar medium, fueling the creation of new stellar objects. In this way, supernovae contribute to the "life cycle" of the universe- as stars collapse and reach their ends, parts get recycled to help create new stars and objects.

If the core is 2-3 solar masses or less, it evolves into a neutron star - a star made up almost entirely of neutrons. Despite the name, neutron stars do not behave like normal stars in that they do not burn their core through fusion. Neutron stars spin very fast due to how dense they are, and they have very strong magnetic fields, which can emit radio waves. As these stars spin, the radio jets are aimed out into space. When the jet is momentarily aimed towards Earth during its rotation, we see a regular, repeating pulse...which is why these stars are called pulsars.

Neutron stars are composed of, as said before, neutrons, leaving the star with no electrical charge. Though there is no fusion, the star keeps itself together through degeneracy pressure. This can be further explained by the Pauli Exclusion Principle, stating that no two subatomic particles can occupy the same place and state simultaneously. Because of the Pauli Exclusion Principle, the neutrons repel each other and keep in motion, with the sheer number of neutrons creating a force that keeps the object together.

If the core ends up with over 2-3 solar masses of matter (because some of the matter in the outer layers fell back onto the core when the star went supernova), even neutron degeneracy pressure can't support the core against its own gravity and it collapses into a black hole. Once the core contracts to a small enough size, the escape velocity becomes greater than the speed of light! Nothing - not even light - can escape the gravitational pull of the collapsed core. Because of this, we can't even see the black hole itself; all we can see are its effects on nearby matter.

Black holes are technically only theorized as they can not be directly observed due to the lack of emitted light/radiation (hence the term black hole), but astronomical observations of their possible gravitational effects on nearby systems have led to them being commonly accepted as existing stellar remnants, and products of Type II supernovae. Many things about black holes are still not completely understood due to their complex nature.

Light Curves relate to variable stars as well, but analyzing the light curves of supernovae can reveal information about them, such as their type or subtypes. Type II Supernovae are primarily distinguished by a much slower decline in luminosity when compared to the days after the event, highlighted by a prolonged plateau. Type II Supernovae also tend to peak lower than their Type I counterparts, in terms of luminosity. Given the several different possible variations within the Type II supernova, it is important to know the differences between their light curves- it can end up being essential to their identification.

Type II-p supernovae have the distinct plateau in their luminosity that type II supernovae are generally known for, showing a long period of constant luminosity before eventually fading down.

Type II-L supernovae lack the plateau that Type II-p supernovae have, and are much more uncommon. When asked to identify against a Type-I supernova, the Type II-L one will likely have a lower average magnitude and fade out after a much longer timespan.

Type II-b supernovae are peculiar in that after a bit of time, they fade out similar to Type I-b supernovae. When identifying, look for a lower average magnitude and a change in the light curve similar to a "dip"- after declining in luminosity, the curve will rise and peak again, and decline in a (relatively) rapid fashion similar to a Type I supernova. 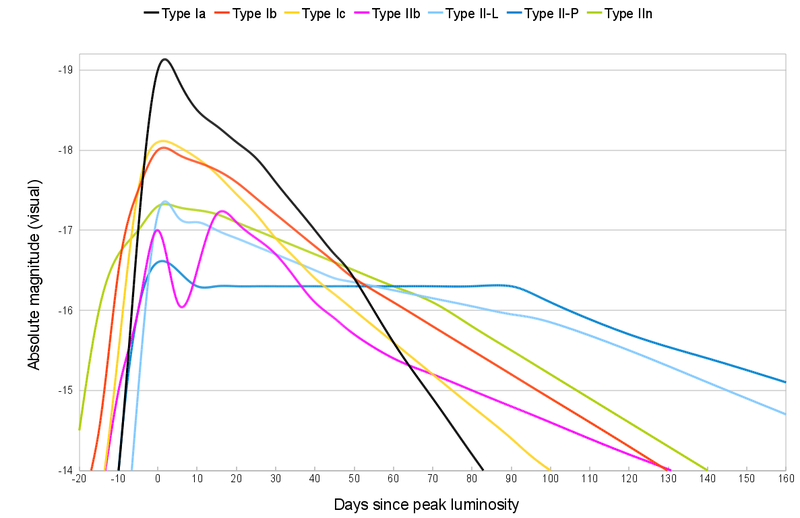 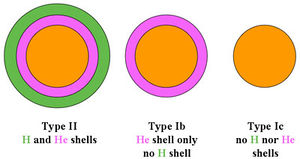 A comparison of Type 1b and 1c to Type II.

Type Ib and Ic supernovae are related to Type II because both of them result from the collapse of a massive star. However, since these stars have lost their outer layer of hydrogen before the explosion, hydrogen is absent from their emission spectra, so their spectra are comparable to Type Ia supernovae, which do not have hydrogen in them either. Type Ic has also had its helium layer blown off, so it will not have helium lines in its spectrum either. This blowing off of layers is normally caused by either a strong stellar wind or the fact that the star is so massive that it has little gravitational control over its outer layers, as in a Wolf-Rayet star.

Since, to exist, the parent stars of these supernovae must have been extremely large, they are only found in areas of rapid star formation, and so they are rarely found in elliptical galaxies and globular clusters.