For 2012, the Astronomy event focused on stellar evolution and type Ia supernovae.

Basically, these supernovae are the explosions of white dwarfs. All type Ia supernovae emit roughly the same amount of energy because they result from the same type of star (a carbon/oxygen white dwarf around 1.4 solar masses), making them a good tool to determine galaxy distances. These supernovae also have very distinctive light curves that fall off quickly and steadily, as compared to the gradual fall-off of Type II supernovae. The spectra is also distinctive, since exploding dwarfs don't have hydrogen absorption lines.

Type Ia supernovae occur because of the Pauli Exclusion Principle, which states that two particles of the same type can't be in the same quantum state (position, velocity, energy level, spin, etc.). Quantum mechanics says that as a white dwarf gains mass and its electrons are squeezed into a smaller and smaller space, they have to move faster to avoid being in the same quantum state as other electrons. As a white dwarf approaches 1.4 solar masses, its electrons start moving at nearly the speed of light! Since nothing in the universe can move faster than the speed of light, a white dwarf can't exist above 1.4 solar masses, and instead collapses into a neutron star or a black hole. This limit of about 1.4 solar masses is known as the Chandrasekhar Limit. 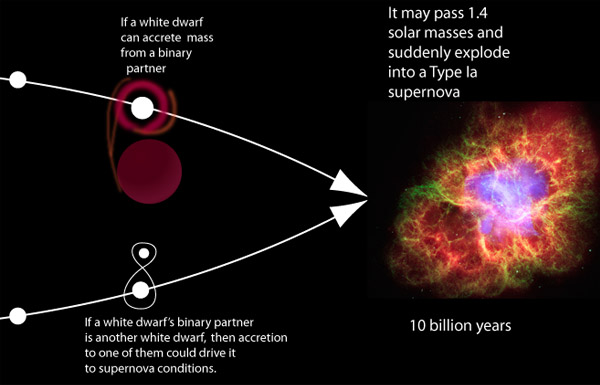 The most common model for a type 1a supernovae consists of a binary star system of two main sequence stars. The larger of the stars will expend the hydrogen in its core faster and evolve into a red giant before its partner. Eventually, the larger star becomes a white dwarf and the smaller evolves into a red giant. The orbital period of the binary star system then decreases and can be as low as a few hours. As the angular momentum of the system is lost, the stars spiral together with the white dwarf accreting gas off of the red giant. Ultimately, the white dwarf explodes for reasons listed above.

Another model is where two white dwarves orbit each other quickly and begin to fall toward each other. Eventually, they will collide in the center of the system, and the resulting body will have a mass of over 1.4 solar masses, thus exceeding the Chandrasekhar Limit and resulting in a supernova. RX J0806.3+1527, a former DSO, fits this model.

Exception to the Chandrasekhar Limit

There have been cases in which a white dwarf has exceeded the limit of 1.4 solar masses before exploding, and the most famous of these is SN 2003fg, nicknamed the "Champagne Supernova". This object approached a mass of 2 solar masses before exploding, so it is causing astronomers to question the universality of the Chandrasekhar Limit. One hypothesis for the fact that it exceeded the mass is that its fast rotation allowed it to support more mass than normal white dwarfs. Research paper about SN 2003fg 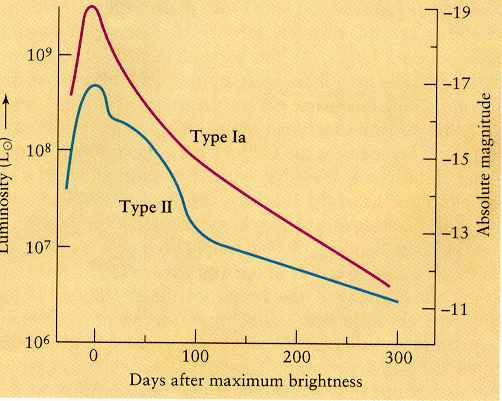 One of the ways astronomers identify Type Ia Supernovae is through their light curves. All of the light curves have a similar shape, with a sharp increase, followed by a decrease that begins steeply and gets flatter. Also, because Type Ia supernovae originate in the same basic way, they all have a peak absolute magnitude of around -19.3, which is useful as a standard candle (see next section). This is one of the main ways that they are differentiated from Type II supernovae, whose curves have distinctly different shapes. A diagram displaying the shape of a Type Ia light curve is at right.

All Type Ia supernovae also have very similar emission spectra, since they all originate from white dwarves. The two major characteristics of Type Ia are that they are lacking in hydrogen (common to all Type I supernovae) and have strong Si II lines (only characteristic of Ia).

Use In Determining Distances

An important characteristic for Type Ia supernovae is that they can act as a standard candle. All Type Ia supernovae have an absolute magnitude of about -19.3 (sometimes cited as -19.6), so by measuring the apparent magnitude observed from the explosion on Earth, one can simply use the distance modulus formula to determine the distance to the object.

So once you know how bright the supernovae appeared from Earth at its peak, you can then determine its distance fairly accurately.

Although the main topic this year is on Type Ia supernovae, you may find questions relating to other types of supernovae and how they differ from each other.

Type Ib and Ic supernova (also called stripped core-collapse supernovae) both result from the collapse of a massive star, much like Type II supernovae. However, the stars that produce Type Ib and Ic supernovae have lost their outer shell of hydrogen (and also helium, for a Ic) due to strong stellar winds or gravitational pull on the outer layers by a partner in a binary system. The spectra of Type Ib/c supernovae are very similar to that of a Type Ia, except for the fact that they lack an absorption line of ionized silicon at 635.5 nm. The spectra of Types Ib and Ic can be distinguished by the absence of helium lines at 587.6 nm for a Type Ic (since it has lost most of its helium).

Type II Supernovae are the explosions of collapsing massive stars. They are also called core-collapse supernovae.