Variable Stars are the focus of Astronomy in 2014 and have been the focus in 2009 and other previous years.

A variable star is defined as a star that undergoes changes in luminosity. In Science Olympiad, you will be tested on your knowledge of various DSOs (Deep Sky Objects), types of variable stars, and other related things.

The other type of pulsating variable are long period variables. They have longer periods than cepheids (such as a year or longer) and have a much less regular period. These variables are also sometimes bigger and cooler than cepheids. A good example is the Mira Variables.

The three main types of variable stars are: 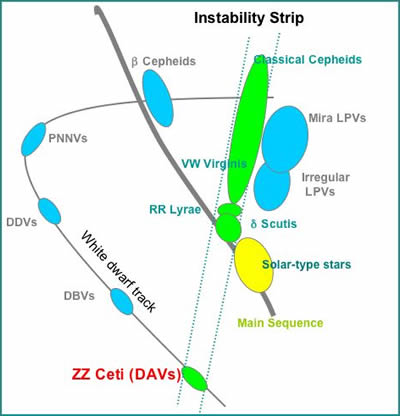 The Instability strip in relation to various regions of stars.

The Instability Strip is a region on the H-R Diagram in which many variable stars can be found. This strip extends through the A, F, and occasionally G classes above and below the main sequence. In this strip, stars have a tendency to be unstable and pulsate, thus causing them to have some variability. Cepheids, RR Lyrae, W Virginis, and ZZ Ceti stars can all be found in this region, as well as other, less common variable stars.

The third major type of an intrinsic variable star is a cataclysmic or explosive variable star. The most dramatic type of these variable stars are called Supernovae. This only occurs in extremely massive and old stars, or in white dwarfs that gain enough mass to go supernova. The outer layers of the star are expelled at high speeds creating a supernovae remnant or nebula. A white dwarf or pulsar is usually left behind. The second type of these variables are called Novae. They are dramatic explosions caused by a pair of close binaries but don’t cause the total destruction of the star. An other type are dwarf novae and are very similar to novae. Dwarf novae are just two binary white dwarfs that regularly have outburst. The fourth and final type of intrinsic variable are Z Andromedae Variables. These are a less common type of variable and are caused by a double star system containing a red giant and a hot blue star; enclosed in a cloud of dust and gas.

Extrinsic variable stars can stars that change in luminosity due to external changes; the two major types are rotating and eclipsing.

Rotating variable stars are stars that change in luminosity due to the rotation of the star. This can happen because of such things as a sunspot on the surface as it rotates. This can also occur when two close binary stars change shape due to their mutual gravity. Fluctuations in magnetic fields can cause slight change in magnitude. 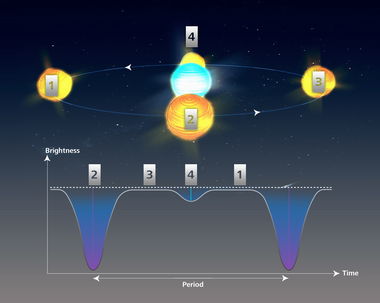 A diagram of an eclipsing binary

The second type of extrinsic variable star are eclipsing variable stars. These are caused when stars in double star systems eclipse, causing a lowing of magnitude. However, this variation can only be viewed from certain angles. Planetary transits can also cause a very small variation in luminosity only viewed with very accurate instruments.

A binary star is a system of two stars that orbit a common center of gravity, or barycenter. These systems make up nearly 80 percent of all stars in the Milky Way. Binaries and other multiple-star systems can be visual, eclipsing, astrometric, spectroscopic, or a combination of these.

Visual binaries appear to the unaided eye to be one star, but can be seen as two through a telescope. An example is Polaris, which is made up of Polaris A ( which is two more stars in itself) and Polaris B.

Eclipsing binaries appear to be single stars through a telescope; however, by measuring the brightness of an eclipsing binary, one can determine that the brightness changes over time. This change of brightness is because the plane of these stars' orbit lies along our line of sight. When one star passes in front of the other, it appears as though the "star" gets dimmer. Thus, their light curves reveal occasional dips in luminosity between constant periods due to this eclipse. Epsilon Aurigae, one of the DSO's, is a special eclipsing binary because one of its components is surrounded by a mysterious dust cloud.

Spectral binaries are stars that are so close that they cannot be distinguished by either a telescope or by measuring brightness. They can only be separated with spectral analyses, which is where they get their names.