Boca Raton Community High School, commonly shortened to Boca Raton High School, Boca High, or Boca, is a Division C team located in Boca Raton, Florida. Considering the team's frequent wins at the Florida state tournament and various invitationals around the US, the team is frequently cited as the running Florida champion team, although this is not always true. The team's structure typically consists of up to five teams, all of which attend the Southeast Florida Regional at the nearby Florida Atlantic University after some of the teams have traveled to invitationals around the country. Typically, up to three teams will advance to the state tournament, of which the top team has attended the national tournament in every year since 2010 (excluding 2021).

Founded in the late 2000s, team growth was off to a quick start. The team first scored first at a regional competition in 2009, allowing them to attend the state tournament for the first time. The following year, the team would repeat this feat while also earning second at the state tournament, qualifying them to attend the 2010 National Tournament, where they scored fifty-first. The team continued to increase their performance and showing at the national tournament, leading up to a current peak of twelfth place at the 2017 National Tournament.

Following increased interest and growth in the program, more teams were added to accommodate more students. Beginning with the 2012 season, Team 2 was founded, increasing the program's size to a maximum of 30 students. Later, Team 3 and Team 4 were founded in the mid-2010's, increasing the program capacity to 60 students. Team 5 was then established in 2017, although this team was temporarily disbanded in the 2021 season due to the changes to Science Olympiad surrounding COVID-19.

The team was started in the late 2000s, meaning that the team is around ten years old. Boca High's first official season was likely 2008. In 2008, the team was much smaller and had little experience in Science Olympiad. However, team members put in adequate amounts of work when preparing for their events and Boca High ended up getting 6th place at their regional tournament, the Southeast Florida Regional, hosted at the nearby Florida Atlantic University in Boca Raton, FL. Considering that Boca High was a new team that turned a 6th place at one of their first regional tournaments showed that the team was ambitious and ready to overcome challenges. Despite their success as a first team, the 6th place was not sufficient to qualify the team for the state competition that year. Nevertheless, Boca continued to study into the 2009 season.

The 2009 season showed that Boca High was preparing better and more efficiently in terms of their events. They continued to study for their events, motivated by their 6th place score at the previous regional. While Boca's improvement overall was not noticeable in the early part of the year, it showed in their placing at their regional tournament in 2009 - a 1st place. Since they placed first at the regional competition, they were able to move onto the state tournament that year, marking the team's first state tournament. At the state tournament, Boca High scored a 6th place. While this did not qualify the team for the national-level tournament, it was an incredible score for the team's first state-level competition. Similar to 2008, Boca High's scores would motivate them to continue in Science Olympiad into the 2010 season. 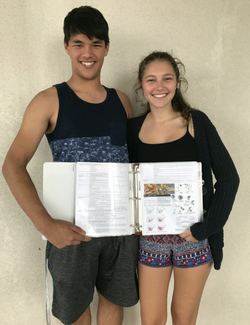 The 2017 Invasive Species duo, who earned 5th place at the 2017 National Tournament

The team is coach-run with high stress on equality among members. For this reason, the team is one of few without official team captains. The majority of preparation is done during after-school gatherings in the coach's classroom on weekdays. Over the weekends, students may meet up together to review their events, including some student-led gatherings at a nearby university.

In the past, a Team 6 did exist, however, due to a large number of dropout the team did not last long, and the remaining members took up open spots on Teams 3, 4, and 5

Throughout its history, Boca High has won a multitude of awards at the Southeast Florida Regional, including many 9 1st place awards and 2 2nd place awards. Additionally, they held a 9-year streak of getting 1st place from 2009 to 2017. In 2020, Boca High managed to place 1st-5th in Boomilever, a feat that had never before happened.

Additionally, in 2015, Team 1 and Team 2 broke a record at the Florida state tournament for being the first school to attain both 1st and 2nd place rankings at the 2015 States competition. However, since both teams were from the same school, only Team 1 was permitted to the National tournament. Archimedean Upper Conservatory, the school that scored third place, won the second bid by default and went to the 2015 National competition in place of Boca High's Team 2. In 2019, Team 1 and Team 2 won first and second place again and Archimedean Upper Conservatory was allowed to Nationals. 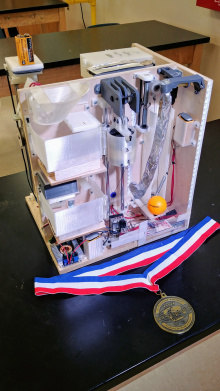