In Bottle Rocket participants design and construct two bottle rockets (made out of one-liter bottles) which each hold a Grade A egg and have to launch it successfully. Participants are scored upon how long the rockets stay in the air and get tiered if eggs break.

The objective of this event is to get your rocket to stay up as long as possible, while also avoiding breaking the egg. An egg survived if it leaves no wet spot on a paper towel. Before even thinking about time, make sure eggs do not break! Rockets with broken eggs are placed in lower tiers than ones with 2 surviving eggs.

To build a competitive rocket, experiment! The more rockets launched, the better idea one will get of what works and what doesn't. It also helps to watch other team's rockets at competitions and see how they perform. This page provides some of what has been learned over the past few years, but there is no substitute to experimenting with one's own designs!

There are two basic factors that work towards time: height and cone (backsliding). These in combination will get a high time of flight. One strategy is to go all out on one of these by either having a rocket that goes almost out of sight but has a weak backslide or having a rocket with great backslide that doesn't go that high. This will achieve some success, but a combination of both is required to have maximum success.

Again, a good way of finding stability is by launching the rocket with different amounts of weight put in different places. One suggestion is adding a penny at a time until the rocket's height at apogee starts to lower, which should make it easier to find the rocket's optimal balance. Fins may also be added to the rocket, but their shape and size does not appear to have a large influence on height.

Under the current rules, backsliding is used as the primary recovery system for the rocket. This is a form of passive recovery system that slows the fall of the rocket, thus increasing its total flight time and decreasing the velocity at which it strikes the ground, making the egg less likely to break. More information on backsliding may be found in the Recovery System section below.

Bottle Rocket has built up a bit of a reputation as an event that is affected significantly by chance. Before reading any further, you must understand that chance does play a role in the event, as prevailing winds, humidity, temperature, and other weather conditions can all affect rocket performance. However, you should also remember that chance favors the prepared mind. While these factors cannot be completely mitigated or predicted, bottle rockets can be made to function in as many environments as possible through practice and testing. It can also be a good idea to bring a container or other form of covering for a rocket in the case of rain at a competition.

The following are the components of most bottle rocket designs:

A. The bottle: a standard 1L carbonated bottle of any shape or color that is not modified in any way
B. The nose cone: cone shape on top of bottle that is beneficial and necessary to achieve winning times. Usually the top of a plastic egg works great.
C. The fins: used to add stability to the rocket, usually 3 or 4 of them

The rocket's pressure vessel in Bottle Rocket is an unmodified standard 1 liter plastic carbonated beverage bottle of any shape or color. The inside of the vessel must be able to be inspected, i.e. it must not be spray painted or covered in opaque duct tape. Labels can be removed, but need to be presented to the judges to prove the size and other information about the bottle.

The rules state that "Rockets must not change shape or deploy and type of recovery system." This bans parachutes and any other non-rigid recovery devices. A few of the systems you should experiment with are backsliders and gliders. Backsliders are the rockets that are modified so that at apogee, in stead of flipping over and heading for the ground, they float back in a higher drag configuration than a nose-dive. A great guide to backslider construction can be found in the links below. Next, are the gliders. You will want to be very careful when designing your wings as to prevent violation of the definition of a parachute or the change of shape rule.

Passive recovery systems help slow the descent without changing the profile of the rocket.

Backsliders are the rockets that are modified so that at apogee, instead of flipping over and heading for the ground, they float back in a higher drag configuration than a nose-dive. This set includes true backsliders which actually fall vertically without tipping at all immediately after apogee and rockets that modify the aerodynamics at apogee to float. A true backslider can be made by taking your aerodynamically stable rocket and moving the CG back closer to the CP. Other ways of modifying the aerodynamics at apogee include removal of the cone or a ball, or tilting the fins for a "spin" recovery. This is a very broad category with plenty of designs to try out. A great guide to backslider construction can be found in the links below.This is the most common recovery design and, if built correctly, can achieve a hang time of over 30 seconds.

Next, are the gliders. This design also has a lot of potential. The most successful variations of gliders will most likely deploy the wings at apogee and glide to the ground. Teams that plan on using gliders want to be very careful when designing the wings as to prevent violation of the definition of a parachute. The two main things to be sure to include are that there is a rigid border to the wings, and that the covering on the wings is reasonably taut.

Finally, one or several propellers can be used to slow the descent. The hard parts about this design is getting the rocket to be positioned so that the propellor(s) will actually turn and hiding the propellers until apogee.

Note: Active recovery systems such as parachutes are not permitted for the 2016-2017 season.

Fins usually add to the stability of the rocket. Tape is the only material allowed to secure fins to the rocket, and the fins must be 5 centimeters above the bottle opening. Generally, 3 or 4 fins are sufficient for rockets.

Wood is commonly used as material for the fins. However, finding the right thickness of the wood may be tricky. If the wood is too thick, it will weigh down the bottom of the rocket and shift the center of balance/pressure, which will affect the trajectory of the rocket's flight. Thin wood is very vulnerable to cracking and splitting, especially if the rocket does not land smoothly. Based on the rules, if the fins (or any other part of the rocket) break off during the flight, a violation will occur and the rocket will be tiered.

There are many other materials that can be used as fins for your rocket; finding and testing different materials will often yield best results.

The shape of the fins is something that is often debated. Generally speaking, the shape of the fins should not affect much especially on the way up, but on the way down during the backsliding stage, more area can mean more drag for longer times, to a certain extent. Fins can also be positioned at angles to cause the rocket to rotate. Experiment with different shapes, but for the most part, any of the simple designs below will result in adequate results. 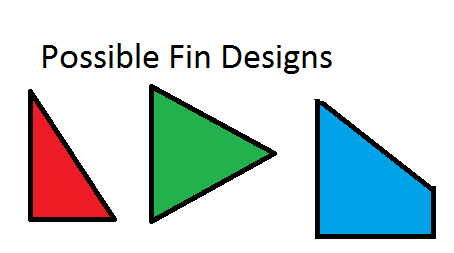 There are many ways and materials to build a nose. Usually, the nose will be mostly conical (hence the name "nose cone"), with an opening at the top to place the non-pointed object (ping pong balls, etc.). It is important to be able to easily re-create your nose cone, as they are very accident-prone.

When attaching the nose to the bottle, make sure it is secured. A good way to test this is to try and wiggle it. If the nose can be wiggled after it has been attached to the body, then it is not attached well enough.

If at all possible, try to test the rockets with the same launcher that will be used during competitions. Sometimes the event supervisor or director will announce the launcher that will be used during the competition, so if you can obtain that exact launcher then you will have accurate results. The Aquaport II Water Rocket Launcher is a very good (but costly) launcher and was used during the 2011 National Tournament. The Bigfoot Water Rocket Launcher is also expensive, but has all of the features necessary.

A more cost-effective way to get a launcher is to build your own. This site features a cheap easy launcher, although it may not be as good quality as the other, more expensive launchers.

In addition to the two time factors stated above, there is one more: the weather. Colder weather will have a negative effect on your rocket's performance. Try to waterproof your rocket. In combination with other factors, this will get you the time desired. One possibility is adding balls of clay one at a time until the rocket's height at apogee starts to decrease. This will make it easy to find the optimum balance of your rocket. You will also want to have fins on your rocket, but the shape and size of the fins do not appear to have a large influence on height as long as there are even fins. Again, testing will determine this.

Due to rule updates, parachutes will be grounds for disqualification, so expect winning times to be greatly decreased from the 1-2 minute launches of the past. This change will limit the role of luck in the event and reward good engineering and innovation. The working definition for a parachute is anything that "fills with air," which creates a simply dichotomy of acceptable recovery systems. If a recovery system fills with air to operate, it will be considered a parachute. This bans parachutes and any other non-rigid recovery devices. The key test in determining if a parachute is present us rigidity.

Remember, the most important part of Bottle Rockets is repetition, and an excess of about 70+ hours of launching tests is recommended (meaning, several hundred runs for maximum efficiency). Be sure to test all available options and configurations for the best rocket.

Through the years, Bottle Rocket has undergone several rule changes. The following information applies to old rules, and is not valid under current rules; however, they may prove useful in future years.

Please note that results before 2013 will include designs that allowed for parachutes.