From Wiki - Scioly.org
(Redirected from Density)
Jump to navigation Jump to search

Density Lab, also known by the names Buoyancy Lab and Buoy Oh Buoy, is an event for the 2021 season. It previously was held in the 2019 season, the first season it was an official event, and the 2020 season. It was previously a trial event at the 2018 National Tournament. This event consists of two parts - a written test on density, buoyancy, concentrations, and the behavior of gases, and one or more hands-on tasks relating to those concepts.

A Density Lab test consists of two parts, a written test, and at least one hands-on task. The written test is 50% to 75% of the total event score, while the hands-on portion contributes the remaining 25% to 50%. The event requires a basic knowledge of chemistry and physics as they pertain to density, concentrations, gas behavior, and buoyancy.

Students must use metric units with correct significant figures unless instructed otherwise.

Students may be required to:

Most hands-on tasks will require students to make measurements using provided instruments. For this reason, it is recommended that students practice hands-on tasks using a variety of instrumentation and techniques.

In general, density is a description of the amount of a substance per unit volume or area. There are several common expressions of density, including mass density, number density, and area density. Usually, the term density is used to refer to mass density.

Densities are expressed in a variety of different units, depending on what type of density it is and the units used to express the mass, number, area, and volume of the substance. All densities, however, are rates and thus their units follow the general form [Unit of mass or number] per [Unit of volume or area]. For example, the mass density of gold is approximately 19.3 grams per cubic centimeter.

In general, the density of a material is greatest when it is a solid and decreases as it changes phase to a liquid and from a liquid to a gas. This is not always the case, however; water is less dense as a solid than liquid. Likewise, within a single phase, density usually decreases with increasing temperature, a phenomenon known as thermal expansion. Conversely, substances within a single-phase usually increase in density with decreasing temperature, known as thermal contraction.

Mass density, usually just called density, is the mass of a substance per unit volume. It is usually represented by the lowercase Greek letter rho ([math]\displaystyle{ \rho }[/math]).

The formula for calculating density is shown in the image to the right.

Number density can be calculated for any objects, though it is often used for the density of individual atoms or molecules. It is important to specify the object the number density refers to when writing the unit.

Area density is the mass of an object per unit of surface area. It is commonly used for expressing density of objects such as paper or fabrics, whose thickness is not easily found using typical measuring instruments.

The pressure of any substance is defined as the force it exerts on another substance per unit area, perpendicular to this acted force. In terms of gases, it can also be defined as a measure of the number of collisions that gas molecules have with their container. An instrument used to measure pressure, typically in the atmosphere, is a barometer. The general formula for the pressure exerted on a substance is [math]\displaystyle{ P = \frac{F}{A} }[/math].

While its main application in this event is the gas laws, it may be useful to know the gauge pressure in multiple applications, such as a container full of said fluid on any object in the container or the bottom of the container itself. The solution to the calculation of this gauge pressure would be the product of the density, the gravitational constant, and the height of the fluid that is exerting this pressure on an object. The formula for this pressure is best known as [math]\displaystyle{ P = \rho gh }[/math]. Be careful with this formula though, because it can be a bit misleading in certain scenarios. For instance, if there is a pressure at the top of the fluid, such as atmospheric pressure, you must subtract the pressure on the top of the fluid from the pressure the fluid exerts on an object or surface below it. Also, make sure to keep in mind that hydrostatic pressure assumes that the fluid in this said container is water, which has a density of approximately 1 g/mL, as you may already know.

Another instrument besides the barometer that measures pressure is a manometer, a system where a gas tank is connected to a U-shaped tube filled with mercury. Depending on the side of the tube the majority of the mercury is on, the formula for the pressure of the gas may change. Though it is less likely to appear on a test, it is still good to know just in case. An image is shown below that shows the formula, dependent on the location of the mercury and how high or low it is on either side.

Gas laws describe the relationship between key variables of gases. These variables include: 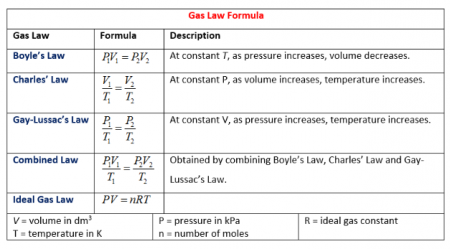 A summary of the gas laws is shown in the image to the right and the table below.

For two combinations of pressure and volume for a fixed amount and temperature of gas, the relationship may also be written [math]\displaystyle{ P_{1}V_{1}=P_{2}V_{2} }[/math]

Charles' Law states that for a constant amount and pressure of gas, the volume and temperature are directly proportional. Mathematically, this can be stated as the ratio of the volume of the gas to the temperature of the gas being a constant: [math]\displaystyle{ \frac{V}{T}=k }[/math]

This relationship between pressure and temperature with a constant amount and volume of gas is true because if the temperature is increased, gas particles move faster and collide with the rigid walls of the container more rapidly, increasing pressure. The vice versa is the same, when the temperature is decreased, gas particles move slower and collide with the walls of the container less rapidly, decreasing pressure.

Any two of Boyle's, Charles', and Gay-Lussac's laws may be combined to find the combined gas law, which states that for a constant amount of gas, the ratio of the product of pressure and volume to the temperature of the gas is a constant: [math]\displaystyle{ \frac{PV}{T}=k }[/math]

Avogadro's law states that for constant pressure and temperature of a gas, the amount of gas is directly proportional to the volume occupied by the gas. This can be stated as the ratio of the volume of the gas to the amount of gas being a constant: [math]\displaystyle{ \frac{V}{n}=k }[/math]

The value and units of the ideal gas constant will depend on the units used to express the variables in the ideal gas law. Some common values are given in the table below. 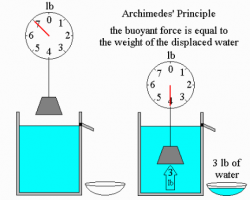 Archimedes' Principle states that any body completely or partially submerged in a fluid (gas or liquid) is acted upon by an upward, or buoyant, force. The magnitude of this force is equal to the weight of the fluid displaced by the body.

Base and Derived Units