Detector Building is a Division C event which has been run officially since 2020. Previously, it was a featured trial event at the 2019 National Tournament and was also run at various 2019 state tournaments including North Carolina, Texas, and Florida. The event has a device and exam component, both of which are tested on event day. Teams are expected to build a device that can accurately measure mass across a given range in grams, while also displaying a related LED color. For testing, teams are also expected to complete an exam related to constructing a force-sensing conductivity device. Teams are also expected to create and submit a design log showcasing how their device was built.

The event was first ran at the 2019 National Tournament and was first officially ran as a Division C event in 2020. In the 2020 season, many community members claimed the rules were too vague, limited design freedom, and were ignored by some event supervisors. Changes were made throughout the 2021 and 2022 season rules to address these issues, including adding support for a virtual format of the tournament.

For the 2023 season, students are required to build a force/mass-sensing device that accurately measures and displays mass in grams of different objects using a microcontroller board such as the TI Innovator, Arduino, or Raspberry Pi. The device must contain red, green, and blue LEDs to indicate mass ranges. Teams are also required to prepare a Design Log that contains a photograph and description of the device, mass in grams/voltage raw data, plotted mass in grams/voltage data, mathematical model(s) used for grams-voltage conversions, and annotated printouts of code.

The event includes a written test that covers topics including force/stress/strain/resistance relationships, theory and operation of electrical components, relationships between force/mass/pressure, and determining real world relationships from raw data. 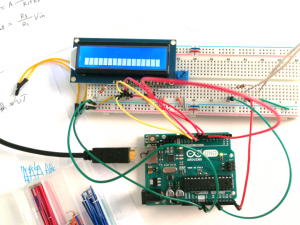 Electricity can break an Arduino. If more than 40 milliamps of current travel through a pin, the Arduino may reboot or the pin may "burnt out," leaving it permanently disabled. A current this large would also blow an LED. Make sure to have enough resistance in your circuits!

Raspberry Pi is a microcomputer that runs the Raspbian operating system, which is derived from Linux. In this way, it is more versatile than many other microcontroller systems. For instance, Raspberry Pi can link directly to an HDMI-enabled monitor as well as keyboard and mouse. However, the Raspberry Pi must be fed large amounts of electricity to sustain its powerful processing, and it is therefore susceptible to overheating. A fan may be installed to cool the Pi down.

Unlike a laser, the color of light emitted from an LED is neither coherent nor monochromatic, but the spectrum is narrow with respect to human vision, and functionally monochromatic.

These topics were part of the 2022 rules, and are no longer relevant to this year's event

Most of the basic questions have info that Chem Lab/Aqueous Solutions would provide.

The van't Hoff factor is the number of particles each solute formula unit breaks apart into when it dissolves. This is usually used in colligative properties which include freezing point depression, boiling point elevation, osmotic pressure, and vapor pressure.

The equation for solutes that don't fully dissociate can be represented as:

where i is the van't hoff factor, α is the fraction of solute particles, and n is the number of ions. The general equation is

These topics were part of the 2019-2021 rules, and are no longer relevant to this year's event

Steinhart-Hart equation can help calculate the temperature based on the resistance that the thermistor outputs.

T = Temperature (in Kelvin) a, b, c = Steinhart-Hart parameters

Stainhart-Hart parameters need to be calculated for individual thermistors. This can be done using this website: Thermistor calculator

This equation utilizes one variable, unlike the Steinhart-Hart equation's three variables.

Each team's Total Score is the sum of their Build Score, Design Log score, and Written Test score. The team with the highest Total Score wins.

Second number after the slash represents the points that regionals will score by.

Teams with any construction or competition violations will be ranked behind teams without violations.