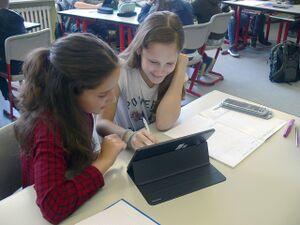 Students frequently were only able to take tests on digital devices throughout the 2020-21 season.
See also: Effect of COVID-19 on the 2019-20 season

National Science Olympiad helped to introduce measures to counter the negative impact of COVID-19 on Science Olympiad, including introducing the MY SO, Satellite SO, and Mini SO programs. These programs were meant to engage students and assist tournaments in hosting their tournaments through pre-defined formats. Additionally, some event rules were modified so that the events could be run easier at digital tournaments, such as modifying Write It Do It to become Write It CAD It. Many teams attempted to increase engagement within their own teams by hosting fun digital events or socially-distanced events.

The 2020-21 season concluded with the 2021 National Tournament, which was held digitally, although still hosted by Arizona State University. It was announced that the next national tournament would likely be virtual as well, which generated both support and backlash from members of the community, considering the benefits and losses of the largely virtual format of the 2020-21 season.