From Wiki - Scioly.org
(Redirected from GPS)
Jump to: navigation, search

For the trial event rules for Geocaching, please see this link.

Use as a Trial Event

Geocaching has been used as a trial event in the following tournaments: 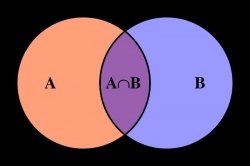 Two calculations will put you in the intersection of the two circles. 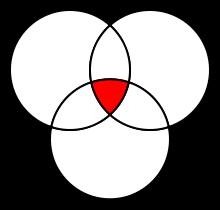 Three will decrease the size of your potential location.

NAVSTAR stands for NAVigation Satellite Timing And Ranging, conceived in the 1960s, begun in 1978 and in operation as of 1995. NAVSTAR itself is made up of a Space Segment (the satellites), a Control Segment (receivers or dishes on ground) and a User Segment (you). The Space Segment is composed of 24 satellites and 2 spares, orbiting 12,000 feet above the surface of the earth, moving along 6 orbital path, one rotation taking 12 hours. At any point in time, any spot on the Earth should be in view of 6 of these satellites.

A GPS unit will communicate with satellites within range. Because speed is a known factor it can used to calculate distance from the unit. This calculation puts the unit inside an imaginary sphere. Adding a second and third satellite's calculations narrows down the probable area where you are. With 3 satellites, the unit is in 2D mode, meaning location has only been calculated horizontally, but with the addition of a fourth satellite, the unit enters 3D mode, where elevation can be calculated as well.

Location information on a GPS is based off of two parameters--a coordinate system and a datum. Both will be explained here.

A coordinate systems provides a means of defining a location by measuring horizontally and vertically. There are two main types of coordinate systems. Angular (i.e. Longitude-Latitude) are used when measuring 3-dimensional objects, like spheres. This is NOT a grid system, and lines do not meet at 90-degree angles except at the Equator. Rectangular, however, is a grid system, and is designed for use on a map. Some maps will have both systems present.

Latitude measures north-south distances beginning at the Equator, which is the 0 line. These are the horizontal lines as seen on the globe, are space equal distance apart and never come together. These lines are 15 degrees, which is equal to 1,035 miles.

Longitude measures east-west distance, beginning at the Prime Meridian in Greenwich, England, the 0 line. It extends out 180 degrees in west and east directions from the International Dateline, but should be expressed as east or west of Greenwich. These lines are also 15 degrees apart, though the distance between them decreases at you approach the poles.

UTM stands for Universal Transverse Mercator, and this system may be less familiar to people, and is a grid system designed for 2-dimensional maps. Based on the UTM system, the earth is divided into rectangular-shapes zones whose sides meet at 90-degree angles. On a map of the earth, there are 20 such boxes vertically and 60 horizontally. Columns are numbered 1-60 and rows are labelled C-X, omitting O and I so they are not confused with 0 and 1.

Each zone is centered on a longitude line, and the rows are based on latitude lines running every 8 degrees.

A datum is a mathematical model used to calculate the shape and size of the earth. They are crucial in map making, when 3D landscapes must be converted into 2D images. There are many different datums, but not all maps will use the same one. Datums include NAD27, NAD83, WGS84, and ITRF00. When using a GPS straight out of a box, it is most likely set to WGS84, though this can be changed as needed.

A Waypoint, sometimes called a landmark, is a specific location defined by a set of coordinates. GPS units can typically store large amounts of waypoints, though it is a good idea to delete old waypoints that you will no longer use.

In order to accurately navigate, a GPS unit must have a good line of 'sight' to the satellites. Barriers such as trees, canyon walls, metal roofs, bridges and even your own body can block the signal. Accuracy will become compromised inside wooden buildings, in upper levels or near windows and within cities between tall buildings. Because of this, your unit should receive signals from 6 satellites, but no less than 4.

Use all 7 digits when inputting Easting and Northing numbers. Your GPS will not accept shortened numbers, which means you must place an extra 0 in front of the Easting number. Do not round off or replace the last 2 to 3 digits if entering a UTM coordinate, as this may result in an error of hundreds of meters. When using the Latitude-Longitude system, have in mind which format you are using; degrees, minutes, second (DD MM SS), degrees, minutes, decimal minutes (DD MM.MMM), or decimal degrees (DD.DDD).

The GPS system was originally designed for use by the military, and geocaching was conceived shortly after Selective Availability (see below) was turned off in early 2000. The first cache site was documented on May 3, 2000 by Dave Ulmer on sci.geo.satellite-nav as 45°17.460'N 122°24.800'W, and called the idea the "Great American GPS Stash Hunt". By May 6, 2000 it was reported to have been found twice, and was logged once by Mike Teague. Within the first month, Teague began gathering posted coordinates for more caches and compiled them into a mailing list. The term geocaching was coined on this mailing list on May 30, 2000.

For awhile, geocaching was confined to those who had experience with GPS beforehand. Tools were almost non-existent for determining if a cache was nearby, if one existed at all. Geocaching.com was announced on September 20, 2000 by Jeremy Irish, beginning with the then 75 known caches around the world.

Slashdot, a popular online magazine for techies, reported about the activity on September 25, 2000, introducing a larger group of people to the activity. The New York Times picked up the story and featured it in its "Circuits" section in October, starting a domino effect of articles on the activity. The growing community picked up the phrase "If you hide it, they will come" to encourage new players to create new caches.

Today, Geocaching.com is run by Groundspeak Inc. out of Seattle, Washington.

The prefix geo, for Earth, was used to describe the global nature of the activity, but also for its use in familiar topics in GPS such as geography.

Caching, from the word cache, has two different meanings, which makes it very appropriate for the activity. A french word invented in 1797, the original definition referred to a hiding place someone would use to temporarily store items. The word cache stirs up visions of pioneers, gold miners, and even pirates. Today the word is still even used in the news to describe hidden weapons locations.

The second use of cache has more recently been used in technology. Memory cache is computer storage that is used to quickly retrieve frequently used information. Your web browser, for example, stores images on disk so you don't have to retrieve the same image every time you visit similar pages.

Selective Availability (SA) added intentional errors that varied on time of up to 100 meters (328 ft) to publicly available navigation systems. This was intended to deny enemies the precise use of civilian GPS receivers for precision weapon guidance. Typical SA errors were 50 meters (164 ft) horizontally and 100 meters (328 ft) vertically, though this could be corrected. Fixed stations with accurately known coordinates could read the errors and transmit the SA error values to local GPS users. This process is called Differential GPS, or DGPS.

This ineffectiveness was a common argument for turning off SA, finally done so by President Clinton is 2000. As of 2007, GPS III satellites were not capable of implementing SA, making the change permanent.

The act of searching for cache locations or the caches themselves will sometimes arouse suspicion in police, law enforcement and witnesses. Caches have been mistaken for bombs, resulting in bomb squads investigating, and sometimes destroying caches, though this is rare. The government and the public at large will occasionally view the act of placing geocaches as littering, resulting in a process dubbed CITO (Cache-In-Trash-Out) to mitigate this perception.

Geocaching as it exists today is not illegal in the United States, though in 2005 the South Carolina House of Representatives passed Bill 3777 which stated, "It is unlawful for a person to engage in the activity of geocaching or letterboxing in a cemetery or in an historic or archeological site or property publicly identified by an historical marker without the express written consent of the owner or entity which oversees that cemetery site or property." The bill was referred to a committee upon its first reading in the Senate as has remained there since then.

Individual geocaching websites, government agencies, and others have often developed guidelines for geocaching. Generally accepted rules include not endangering others, minimizing the impact on nature, respecting private property and avoiding public alarm.

Here are some sample questions as provided on the rules.