According to the most recent rules released by the national committee, in Green Generation, "Students will demonstrate an understanding of general ecological principles, the history and consequences of human impact on our environment, solutions to reversing trends and sustainability concepts." It contains elements of other events, such as Ecology, Water Quality, and Wind Power, as well as other topics.

Teams are only allowed one two-sided note sheet (8.5" x 11", Letter Size) and a writing implement. Additionally, each competitor may bring a non-graphing calculator.

Ecologists organize the biosphere into several levels. A population is a group of individuals of the same species occupying a common geographic area. A community is formed when two or more populations reside in the same geographic location. An ecosystem is comprised of a community and its surrounding abiotic factors. A biome is a collection of ecosystems with similar climates and communities.

Food webs describe the flow of energy within an ecosystem by linking together several food chains. Each food chain begins with an organism that uses energy from light or chemical reactions to produce organic compounds from inorganic compounds through photosynthesis or chemosynthesis, called an autotroph (also referred to as a producer). Any organism that can't produce its own organic compounds and must consume other organisms to obtain them is called a heterotroph (also referred to as a consumer). Heterotrophs can be further organized based on what they consume:

Note that as opposed to detritivores, decomposers break down dead and decaying organic matter using biochemical reactions without ingesting it. 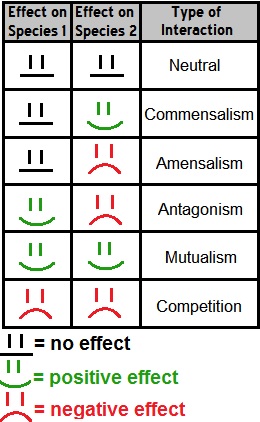 Within a community, species will interact in multiple different ways. The term symbiosis is usually defined as the interaction between two or more species. There are many different types of symbiosis which are defined by whether or not the interaction is beneficial, detrimental, or without effect to the species in the interaction, and they are described below;

In addition, two species that don't have an effect on each other are referred to as neutral.

As described above, competition is an interaction that is detrimental to both species. Competition can be described as intraspecific (among individuals of the same species) or interspecific (between different species).

Competition occurs when two or more species occupy the same niche. A niche is the conditions in which an organism lives and the way the organism uses those conditions (such as how they utilize a resource), and is sometimes described as the functional role of an organism in a community. According to the competitive exclusion principle, no two species that occupy the same niche can coexist indefinitely; eventually one species will always reign dominant and lead to the eventual extinction of the other. This can be avoided by the organisms undergoing a shift towards different niches.

There are many visible human impacts on the environment. However, not all of them are easy to see, and there are many different ways that humans can negatively affect the world around them.

About 40% of all humans live within 100 km of a coastline, so humans have a large impact on aquatic environments.

A "dead zone" occurs when the aquatic environment is very low on dissolved oxygen. This often happens because of an algal bloom. This happens when eutrophication of a body of water (excess input of nutrients) allows algae on the surface of the body of water to proliferate quickly, forming large algal populations. This algae at the surface can reduce the amount of sunlight reaching aquatic plants, which hampers photosynthesis (sometimes completely), resulting in decreased levels of dissolved oxygen. Additionally, as algae from the initial eutrophication begin to die, the dead biomass will be decomposed by aerobic (oxygen-requiring) bacteria, further depleting the water of dissolved oxygen. Many aquatic organisms depend on oxygen to survive, so with low concentrations of oxygen, organisms will die out or leave for other areas with higher oxygen levels. This creates a dead zone with very little aquatic life.

The release of greenhouse gases into the air affects the quality of the air we breathe, since certain particulates can cause discomfort or even diseases.

Acid rain is the effect that occurs when greenhouse gases, primarily sulfur dioxide and nitrous oxides, are dissolved into water droplets in the air. This leads to a high concentration of hydrogen ions in the rain, which in turn results in an acidic solution (pH of usually 5 or 6).

Climate Change is defined as the change in weather patterns over an extended period of time. Factors that can determine and affect climate are called forcing mechanisms. Forcing mechanisms can be further classified as either internal or external. In Green Generation, the greatest emphasis is on external forcing mechanisms, primarily human influences.

Sustainability has many different definitions, but most of them refer to a system's ability to be productive over an extended period of time. Such a concept can be difficult to achieve in practice, but there are solutions available to help improve a system's sustainability.

Bioremediation is the use of biological organisms to clean up an environment. Generally the term refers to the use of microbes to decontaminate a polluted area, but the term can apply to plants and fungi as well.

Renewable energy comes from resources that can be renewed relatively quickly, such as wind or vegetation. The use of renewable energy can prevent ecological damage if a resource is only utilized under a sustainable yield.

Resources can be divided into three classifications based on how promptly they are renewed:

People can contribute to sustainability by doing some very simple things on an everyday basis. Some everyday solutions include:

People are organisms, and like any organism, they need resources to live. However, humans are unique in that we have built a large, organized civilization with advanced infrastructure, which takes up significantly more resources than other beings whose main concerns are survival and procreation. As the human population continues skyrocketing past 7 billion, there are several ways this can affect the environment

Due to the wide variety of environments people live in, there are several different impacts humans have had on terrestrial environments.

Deforestation is the destruction of forest environments for wood or human development. Deforestation results in a loss of habitat for many species, therefore hurting biodiversity. The loss of photosynthesis results in less buffering of carbon dioxide levels. A method of clearing forests for agriculture called slash-and-burn involves the burning of vegetation and releases a massive amount of carbon into the atmosphere. Deforestation can drive desertification, as described in more detail below.

Many different countermeasures are used to prevent and combat desertification, such as reforestation. Reforestation of certain plants can help enrich the soil and restore its fertility. Reforestation also occurs in the form of windbreaks and woodlots. Windbreaks are rows of trees planted in a way as to provide shelter from the wind, and can help reduce soil erosion and evapotranspiration. Woodlots are like forests, but are generally distinguished by being too small for full-scale commercial harvesting.