Articles in this series

The following is a list of pages pertaining to Mission Possible for Division C. Some of these pages may contain outdated information.

Lego Mindstorms and NXT are very convenient, if expensive, ways to build a variety of robotic devices for events like Electric Vehicle, Robot Ramble, Robo-Cross, Robo-Billiards, and Mission Possible C. The programming language that these systems are shipped with, however, is entirely unsuited for serious competition. Third party text-based programming environments are widely availible, relatively easy to use, and are vastly more powerful than the provided systems.

NQC and its brethren

This section is written specifically for NQC, but the code for programming the NXT is almost identical, so it should be easily translated.

Using a datalogger program is an easy way to collect data in a format that you can then view in Excel to analyze for trends and peaks.

The following is the data from a 2000 entry Datalog that recorded the light sensor's reading of a chemical solution prior, during, and after adding a second component that created a precipitate: PrecipitateDatalog 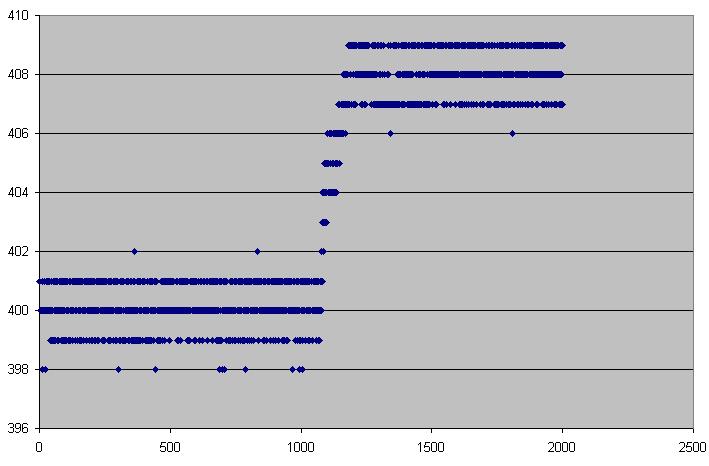 You can see that, while there is a very distinct different between the pre and post-precipitation solutions, the numerical difference is relatively small. This means that you cannot simply rely on a variable you define at the beginning of the program to be accurate in a variety of environments. Slightly different lighting conditions would render static variables completely useless. The following code is a segment of code that allows the program to read the ambient conditions and then make a decision based on that data.

Another example is a device that relies on sound triggers for certain events. The following two graphs are of microphone in close proximity to a piezo buzzer that is intended to trigger an event and a person hammering in close proximity, respectively: 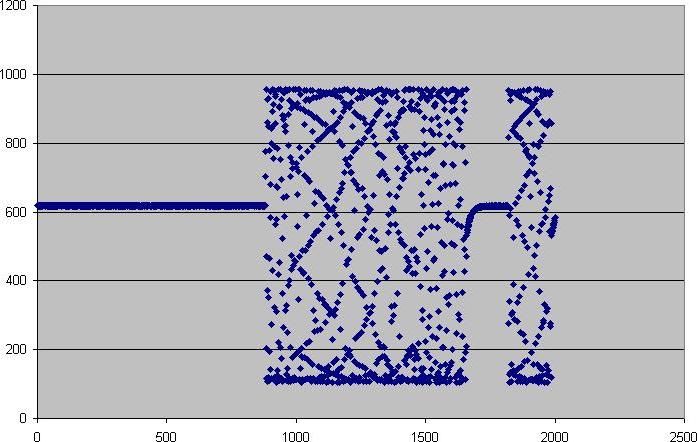 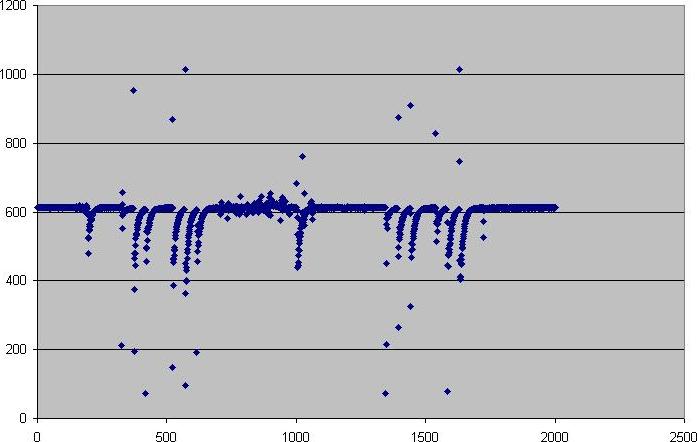 The difference in numerical values between white noise and when the piezo buzzer is activated is numerically tremendous. The hammering tends to have a much smaller range, but has widely varying outliers. Also note that the averaging approach previously mentioned would be completely worthless in this scenario. So if you thought you might be running your device in an environment with noises such as hammering, you would want to set the event to trigger at a level above 900 or below 200 to minimize the chances that exterior noises could trigger it. If that is not sufficient to ensure reliable operation, write your code to require that a significant number of datapoints are both above 900 and below 200 within a small timeframe (100ms). While the hammering does have outliers within those regions, it would not have enough within a short enough time period to create a false trigger, while the piezo buzzer would have no trouble generating a sufficiently dense triggering region.