From Wiki - Scioly.org
(Redirected from Mag-Lev)
Jump to: navigation, search

MagLev is a Division C event that was last run in 2014. Students build a magnetically levitated (hence the name MagLev) car to run a specified distance. Teams must accurately predict the time their car will take, and also take a test over magnetism and some electricity topics that will account for approximately half of their score. Originally called Car of Tomorrow, this event has been run as a Trial Event in New York and Wisconsin. It was run as a Division B Trial Event at the 2011 National Tournament and as a Division C Trial Event at the 2012 National Tournament. In 2012, New York ran the event as a Division C Trial Event under the full name Magnetic Levitation. It became a national event in 2012 and continued until 2014.

Car-Competitors are required to build a vehicle. It must magnetically levitate by either permanent magnets (may not be rare-earth) or electromagnets and move down a track without intentionally touching the bottom. Contact with the side walls is allowed.

Prediction-With any given distance between 50.0 and 95.0 cm, in 1 cm increments, the competitor must predict run time of the vehicle.

Test-The other significant portion of this event is the test. The test counts for about half of the overall score. It covers a broad range of topics within the general field of magnetism from the physics related to magnets and magnetic fields to modern practical applications of magnets such as maglev vehicles.

Propellers-These should be modified to have a 45 degree angle from the motor. You also want long, straight, and large (surface area-wise) propellers to get the highest performance. The larger the diameter, the better the propulsion (to an extent, of course).

Motors-You want mostly high speed motors. They have to push air to move a car almost frictionlessly. High torque, therefore, is not as necessary as other events.

Chassis Base-This part needs to be light enough to not weigh back the motor yet strong enough to withstand countless impacts, vibrations, and motor kickback.

Chassis Tower-This part holds up the motor. It must be secured to the base in order for it to not fall off. It must withstand perpendicular pressure from the fans, must be low, and needs a low center of gravity so the car doesn't tip. But you do not want it too low, or else it will scrape the track.

Magnets-This is one of the most important parts of the car since it must have magnets in order to float. They must be either permanent or electromagnetic, but they must not be rare-earth magnets. For magnet placement, see Miscellaneous:Track.

Mass of Car-The mass of the car must be over 250 grams, although the higher it is the better as far as scoring.

Power-The car may have a battery no greater than 9 volts, or multiple batteries connected together that do not exceede a total of 9 volts, used to power motor(s) and propeller(s). Electromagnets may also be used provided that no more than 9 volts power them.

Dowel-The car must have a dowel measuring 30 cm long with a 1/8" diameter attached vertically to the vehicle. It must be attached within 5 cm of the front of the vehicle. The dowel is counted in the total mass.

Height-Height must be less than 20 cm tall, excluding the dowel, when non-levitated.

Width-The car must fit inside the track. That said, it is important to build your car with a small amount of "wiggle room" so that there is minimal drag between the car and the track. Furthermore, all of these tracks are, unfortunately, not the exact same size; the rules allow that the width may be 2mm more or less than the official track dimensions. Therefore, it is strongly recommended that the car is built to have adjustable width, and this, if applied, is a major part of the construction process. The only true specification given is that no part of the vehicle, with the exception of the propellers, can extend outside the track at any given time.

Track- A common track consists of two metal sides and a metal bottom. It has two magnet strips in the corners of the track. Refer to the following: 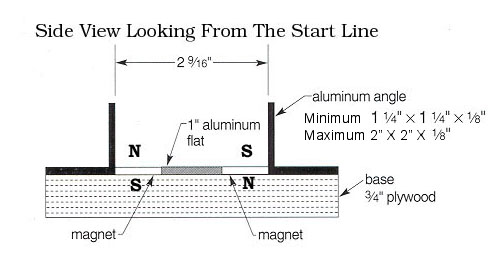 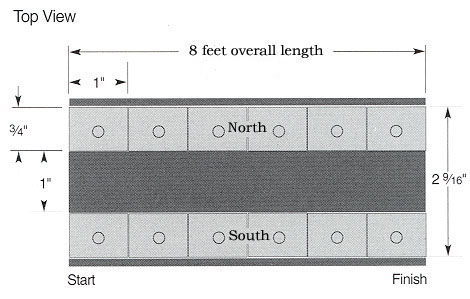 The car, therefore, must have magnets at its edges so that it can levitate on the track. The track must be longer than 4', with a mark at 4'. The inside width is between 2" and 3", and the top railing between 2 cm and 5 cm. Competitors may bring their own track, which allows for greater consistency.

Starting the Car-(Warning: Read the safety section on the wiki before attempting to run your car) The car should be started from a marked point on the track (the rules say where specifically). You will want to place a pencil in front of the car prior to starting the motor. Then, you should release the pencil quickly to launch.

Stopping the CarThe timer should stop as soon as this target is reached. Stopping can be an issue, especially with higher powered cars. One common solution is to have a pillow or block of wood (that falls over, keeping the car from tipping) at the end of the track that cushions the impact. Some competitions have used a metal plate at the end of the track to catch the car. A mechanism to shut the motor down on its own such as a contact switch on the front of the car may be useful.

A significant part of scoring in this event is the run time prediction which, depending on the level of the competition, can be placement-determining. MagLev tracks can be somewhat expensive, so make sure to attempt to find one you can use before you buy your own. Many school technology classes have them, so it is not impossible that your school may already have a track. If you cannot get access to one, you should, then, go ahead and buy one if you can because they are a necessity for this event.

The first thing to do is to adjust your car so that it runs down the track as quickly as it can. To run well, the car needs to be balanced. This is accomplished by adding weight where necessary and by not overcrowding the device. One way to overcrowd is to have more than one motor arranged side-by-side. When this happens, if the device is slightly off weight, it may capsize and break. If your car is touching the edges of the track, it will need to be lubricated. You will need to experiment for yourself which lubricant is right for you.

Once your car runs both smoothly and swiftly down the track, it is time to actually test and time it. Test your vehicle running down the track, timing it, so you can begin to gather data with which you can make accurate predictions. It may be beneficial to derive a formula you can use to predict run time.

Make sure to record all of the data you collect. The rules in 2012-13 do not require any graphs or other testing documentation. However, you really do need the data for the competition otherwise because, as stated before, the run time prediction can be a determining part of your overall score.

Warning: This event can be dangerous even with utmost care. Please use common sense and careful forethought to protect yourself and others from injury. This wiki should be considered only some general amateur advice on safety for running your MagLev. Neither this site nor this article's authors can be responsible for any injury, damage, etc caused by any mistakes, misinterpretations, or omissions.

This event can and has been known to cause injuries. Fast spinning propellers can cut through a variety of things, including human flesh and fingers. Competitors should think carefully about how they intend to run their car to keep their hands well away from the propeller. They will be required to demonstrate these procedures to the supervisor prior to starting their car. Competitors may wish to consider wearing protective gloves while running their vehicle. Crashes and other accidents can send propeller blades flying across rooms. For this and many other reasons, it is imperative that everyone near a running MagLev wear proper eye protection.

Furthermore it is recommended that competitors take multiple precautions to prevent their MagLev from turning on unexpectedly. An example might include not only turning off a switch, but also unplugging the battery until right before competition. Once for example the battery is plugged in, the students should handle the MagLev as if the motors could start at any moment.

Final Score-The final score is the run score, time score, and exam score added together minus all penalties. The best possible final score is 110, and the high score wins.

It is important to ensure that you have all required materials. Remember to bring several new batteries, a backup propeller, tape, super glue, a copy of the rules, and any other tools or parts that are needed specifically for your vehicle.

Check before the run to ensure the polarities of your magnets are correct. Ask any questions or clarify anything you need to know before running. Remember, in this event, the MagLev track may be as short as four feet long, so the reaction time of the supervisor or timer will have an effect on time. Note that, if the timer is a bit delayed for every competing team, then it will solely come down to the speed of your vehicle. Some competitions may use photo gates for more precise timing.

Ferromagnetic materials are the only permanent magnets of the three types discussed here. They produce fields which are always stronger than those made by diamagnetic or paramagnetic substances.

[math]M[/math] is the resulting magnetization.

[math]\chi[/math] is the magnetic susceptibility.

[math]T[/math] is the temperature in kelvin.

[math]C[/math] is the material-specific Curie constant.