This article is about a design shared by former competitors. For more information about the event, see Mousetrap Vehicle. 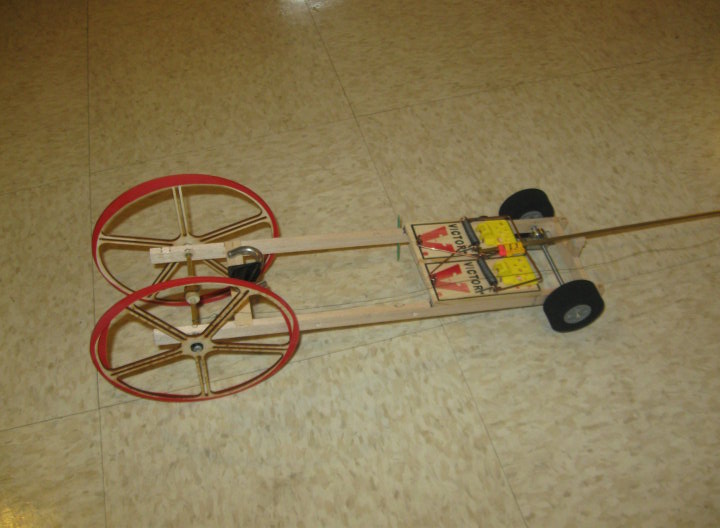 Vehicle described in this section

Feel free to copy this design, its creators/designers have graduated from high school and feel like some teams deserve a good place to start for next year. At the national competition, this design placed 14th at the University of Illinois and was based off a design that won second place as a trial event at the National Competition in Augusta, GA. Based on the above classifications it is a category 3 type car (I believe that these are the most reliable and quickest).

The most important part of the whole competition is speed, especially when you get to higher level tournaments. Keep in mind, however that no matter how fast your car is, it still needs to be reasonably accurate. Even if you can shave off a second, will it still stay within 4cm? That is a question you should ask yourself if you find yourself competing at the national level.

When my partner and I were building the car we would break it up into separate parts: the mousetraps, the chassis, the wheels, the axles, the lever arm, and final assembly. This is how I will write this guide.

It took my partner and I a while to learn this but the mousetraps actually vary considerably. We built a testing apparatus in order to gauge the initial strength of every mousetrap that we considered to use for our car. Unfortunately, the mousetraps would become worse over time but we found that it was not hugely important. We used Victor mousetraps and purchased as many as we could at a time in order to compare them. Once you have all of your mousetraps tested, set the best two aside.

We used two different types of wheels on our car. The wheels on the front were our braking wheels and were actually plastic airplane wheels. They can be found here and here (click on Small Wheels then Lite Flite). The other wheels that we used were the drive wheels and were actually specially designed by us and cut on our school's laser cutter. If your school is not as fortunate as to have a laser cutter, you can always use cd's but the rest of this guide is written with the intention that you are doing it EXACTLY as we did. Because the drive wheels were cut out of wood they did not have a lot of traction. What we did to compensate for this is that we cut a balloon into strips and put the strips around the wheels. I believe that a guide to do this can be found here.

My partner and I used two types of axles. We used a 5/32" hollow brass rod for the drive axle (we used brass because of its combination of strength and weight, we tried aluminum but it bent way too easily) and a 8-32 aluminum threaded rod for the brake axle. The brake was just a standard wingnut braking system used for many of the car events such as scrambler and electric vehicle. The threaded rod needs to be cut just long enough to go through the chassis and the airplane wheels whereas the brass rod needs to be cut just so that can just fit through the chassis and maybe a few washers (optional). Then, you need to thread the inside of the brass rod so that you can screw the drive wheels in.

The chassis needs to be super-lightweight. For this reason, my partner and I decided to use 1/2"x1/4" balsa wood (don't worry it's strong enough). These were cut longer than the wheelbase by about 5cm. Then we drilled 1/4" holes for the axles to go through. Our secret is that the axles were not 1/4" but we would put plastic spacers (purchased at your local hardware store) into the holes and these acted as bearings. I believe that ball bearings are overkill. They are just too heavy for this event.

Then we had to make wooden spacers to keep the longer wooden pieces (we called them runners) apart. We built the car so that the width of the chassis was the same as the two mousetraps side by side. I believe that there is no reason for it to be any wider. Then we super-glued the pieces together to form a rectangle (it's easier if you have made a jig for this). Make sure that when you're gluing the pieces together that the axles can spin freely or else there will be too much friction in the car.

The lever arm is actually the easiest part of the car to make (we just made it out of the same material as the drive axle, the hollow brass rod). Just imagine where your mousetraps will be on your chassis and measure the distance from there to the drive axle. Cut the lever arm to that length and drill a hole in it. This brings up the topic of string. We used braided fishing line which does not stretch. It also was very strong and had a small diameter. I would advise using it if it is at all possible. You might have to ask the guy at your local sports/fishing store where it is because it is sometimes hard to find.

You should have all the parts that you need to finally put the car together by this point. Start by super-gluing the mousetraps together. Wait until they dry and glue them onto the spot where you want them on the chassis. Make sure they are facing the right direction! When they are closed, the metal part of the trap should be closer to one of the sides of the chassis than the other side and should be near the braking axle. Once the mousetraps are glued in, you can zip-tie the lever arm to both of the metal moving parts of the trap. Then, insert the braking axle and assemble the wingnut braking system. Once that is complete, screw on the airplane wheels. Then put the drive axle into the chassis and screw in the wheels that you have made. If there is too much left/right wobble, you can add in some washers to get rid of the extra space. There is one final step after this which is adding a peg to the drive axle. We accomplished this by wrapping a thin piece of wire around and then twisting it together. Then we super-glued it and trimmed it. It should be less than 0.5cm long or else it may be difficult for the loop on the end of the string to come off, allowing the car to coast to the finish line.

1. Some people advocate the use of lubricants to speed your cars up. When I tried using liquid lubricant it just gummed up the axle and solid lubricants like graphite would just slow the car down.

2. Try your best to do your runs on a clean surface; we had to clean out the space between the chassis and the axle many times last year. We've found hair and other gross stuff in there but mostly it just makes your car go slower.

3. If I had more time to test, I would have tried making a deceleration sequence on the end of the run during the coast to the finish line. Our car would lock up and skid way past the line. Even though we consistently got super fast times (around 10-11 secs), the skidding killed our distance score (around 15-20cm) which was equivalent to around 4-5 extra seconds.

4. Don't be afraid to build many many cars. We always had at least one backup car and the building experience will help make your cars higher quality and run faster. We built at least 5-8 chassis's last year and rebuilt the wheels around them (yes, the chassis's are reusable).

5. Make sure you test a lot so you know how to get your best score. Also, have a backup plan in case your car doesn't make it to the first line (an added score of 1000 is a lot worse than making it all the way back).

6. And finally, make sure that when you start the car that the brake is not still locked up. It should be as close as possible to it's final location but it should not be locked up or else the car will not run. (In case you haven't figured it out yet, the wingnut starts near a spot where it cannot move but moves in the opposite direction, then turns around when the car turns around and theoretically should stop exactly at the starting line)