Nuclear Science Lab was a trial event for Texas Division C in the 2011 season. It is an event based solely on nuclear reactions and their uses. Students are expected to be able to use radiation detection equipment and have knowledge of topics such as radiation, terminology, and nuclear decay reactions. Students are allowed to bring a scientific calculator, but NOT a graphing calculator. No resource materials may be brought to the event.

The first part of the event consists of experimental/practical tasks relating to nuclear instrumentation and half life. Students should be prepared to construct graphs with any data they collect. Lab topics may include half-life and decay, background radiation, shielding effectiveness, and the inverse square law. Geiger-Mueller tubes/counters, radioactive sources, and shielding materials are all provided by the supervisor.

The second part consists of a written test focusing on the design and operation of nuclear power plants. Topics of the test include but are not limited to: nuclear reactions, nuclear materials, PWR and BWR technology, radiation types, nuclear fuel cycle, and nuclear fission.

Half Life and Decay

Half-life is used in a variety of applications, including radioactive dating. The original term was coined by Ernest Rutherford, who measured the decay period of radium.

Stars, galaxies, and black holes emit large levels of cosmic radiation. However, at such a distance, we don't get much of it, see Inverse Square Law. In addition, sources from earth such as Carbon-14, nuclear power plants, airplanes, X-ray machines, etcetera contribute to background radiation.

Background radiation is not significant in comparison with specific radiation sources.

The inverse square law provides a geometrical and mathematical explanation for point source phenomena, such as light, sound, gravity, and electric fields. Radiation also obeys this principle. The essence of this law is that as the energy travels further from the source, whether it be a light bulb or a radioactive blob, the intensity of the energy decreases to remain equal over all area covered. Therefore, the intensity of the radiation is inversely proportional to the distance from the source thereof. There are, of course, some constraints to using this law. First, the point source must be able to spread its radiation in all directions equally, creating an ever-expanding circle. Secondly, this law is only useful if at least three of the values in the equation, or a way to find at least three values, are present. This will be described and expounded upon hereafter.

Alternatively, the equation can be expressed as such: [math]\displaystyle{ {I_1} * {D_1}^2 = {I_2} * {D_2}^2 }[/math] This expression is mathematically equivalent, and is simply another form that is easier to use for some scientists. As a piece of general advice, be sure to compare units before using the equation. Take the time to check if all intensities and all distances are in the same units, and if not, take the time to convert the units. Also compare the units to the question and the answer they are asking for.

Nuclear fission is a type of nuclear reaction in which the nucleus of an atom splits into smaller nuclei. This releases a lot of energy, and creates a lot of free neutrons. It is considered a form of nuclear transmutation, since the resulting elements are different than the starting element. Most fission takes the form of binary fission, which produces two charged fragments.

Chemical elements that can sustain a nuclear fission reaction are nuclear fuels, and are considered fissile. Uranium-235 and Plutonium-239 are common examples of nuclear fuels and are used in nuclear reactors.

Nuclear transmutation is the process by which one element is converted into another. This occurs as a result of a variety of nuclear reactions, or simply nuclear decay. 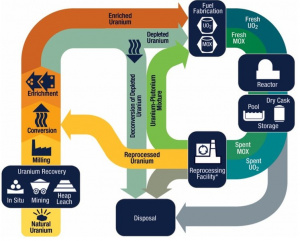 The first part of the event is worth 40 points, and the second part is worth 60. Ties are broken using the score of part 2 first, and then part 1.