Reach for the Stars - Wiki! - Scioly.org

Reach for the Stars

Each team is allowed to bring 2 double-sided 8.5" x 11" sheets of notes and two non-programmable, non-graphing calculators. You are allowed to put anything on this paper, such as text, illustrations, tables, and pictures. Teams may also be asked to bring a clipboard and red filtered flashlight, mainly in the event that Reach for the Stars is run in a planetarium.

For lists of this year's and past years' stars and objects, see the Star and DSO list. 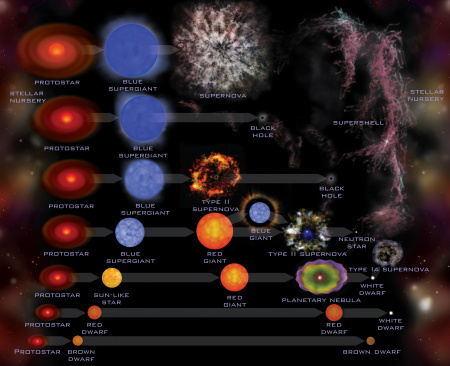 There are also L, T, and Y for brown dwarfs, which are generally not considered stars. They can fuse Deuterium and Lithium, but are not hot enough to fuse Hydrogen into Helium via the Proton Proton Chain.

In order to use this as a normal equation, a proportional constant needs to be added. In this case, [math]\displaystyle{ b=2900\mu m\cdot K }[/math] known as the Wien's displacement constant, is used. Then, 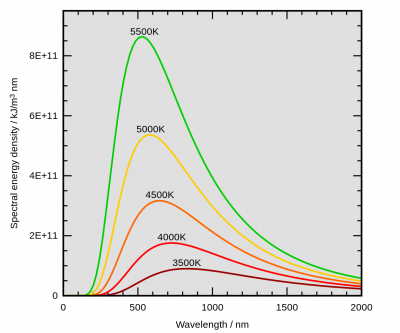 The luminosity of a celestial object refers to how much radiation (visible light, infrared, x-ray, etc.) it emits per unit time. Luminosity is measured in Joules per second or Watts. The luminosity, of the sun, for example, is [math]\displaystyle{ L_\odot=3.846\cdot 10^{26} }[/math] watts. Magnitude scales are different methods to express luminosity.

The apparent magnitude, denoted by [math]\displaystyle{ m }[/math], denotes the brightness of a celestial object as seen by an observer on Earth. The brighter an object appears, the lower its apparent magnitude. It is a logarithmic scale, not a linear scale, which means that a small decrease in magnitude results in a much greater increase in luminosity. For example, an object with apparent magnitude 5 less than that another would seems 100 times more luminous. Logarithms are very advanced for Division B, but at the very least, it is important to know that a small change in magnitude represents a much larger change in luminosity.

The inverse square law says that a certain quantity is inversely proportional to the square of the distance relating to that quantity. In this case, "inversely proportional" means that an increase of one number causes a decrease in the other number. For example, suppose an astronomer measures a star of some intensity ([math]\displaystyle{ I_1 }[/math]) at a certain distance ([math]\displaystyle{ D }[/math]) from the source. By the inverse square law, we have the following proportion: 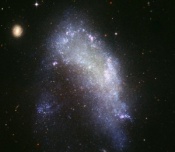