From Scioly.org
(Redirected from Robo Cross)
Jump to: navigation, search

Robo-Cross is an event in which participants must design and build a robot capable of performing various tasks. This robot must meet certain parameters, such as size, method of control, electricity used, and overall safety.

Participants must build and design a robot that will be able to move objects into goals to receive points.

The playing field will be a 4 ft by 4 ft square. In it will be four zones, A,B,C,D. Each will be a square 4 square feet in area. Zone A, to the bottom left (relatively) will be the starting point for the robot. On the bottom right, will be zone B will be the zone containing the objects that will be moved during the run. On the relative top right will be zone C, the area where objects will be moved, aka. the goal. This is the lesser value goal. In the far left corner of this zone will be the bonus jug, a gallon milk jug cut to 15 cm in height. To the top left will be zone D. This will be blocked off by a barrier a little less than 1 inch (More info in the rule book). This is the goal that will get higher point value.

There are many ways to get started, but the easiest way is with a mechanical construction set or a kit.

Some Ways to Pick Up Objects

There are many ways to do this. The following are based on the assumption that your robot will be gathering objects and placing them in container, so that you can gather many objects at once, making minimal depositions to the goal box, and in turn reducing run time. These methods are preferred over strategies that collect the objects piecewise. 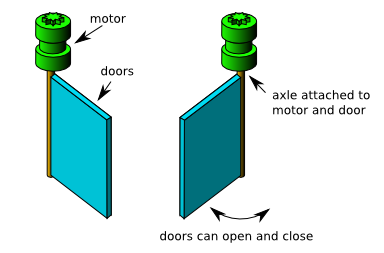 Robots using doors in most cases use either one or two door system. The diagram on the right consists of two doors. Each door is attached to an axle which is also attached to motor. As the motors turn, the doors, or rather flat sheets of material, perhaps aluminum or card-stock, open and close. The operator would open the doors, drive the robot forward and close the doors, while hitting the objects into the container. The operator then moves on and gathers all other required objects on the field using the same method. A one door system would have the same motor, axle, and door setup.

The sweeper system consists of a motor attached to a long axle. The axle is parallel to the ground, and has "flaps" attached to it in places along its circumference. These "flaps" act the same way as the doors in that they hit the objects on the field into the container which is being used to collect the objects. A potential problem with this design is that the flaps can hit the objects with so much force, that if the object is light enough, it can go flying out of bounds.

An arm and claw system is another method of picking up objects. One of the strategies possible with the arm and claw method is to have the claw pick the objects up and store them in a container on the robot, then move over to the goal to transport everything at once.

With an long and/or jointed arm attached to the claw, it could improve accessibility and distance. This would solve the problem of the vehicle moving closer to the object to reach it, and instead bumping the object and making it roll farther and farther away. To see ways to build an arm, see the Robot Arm page. 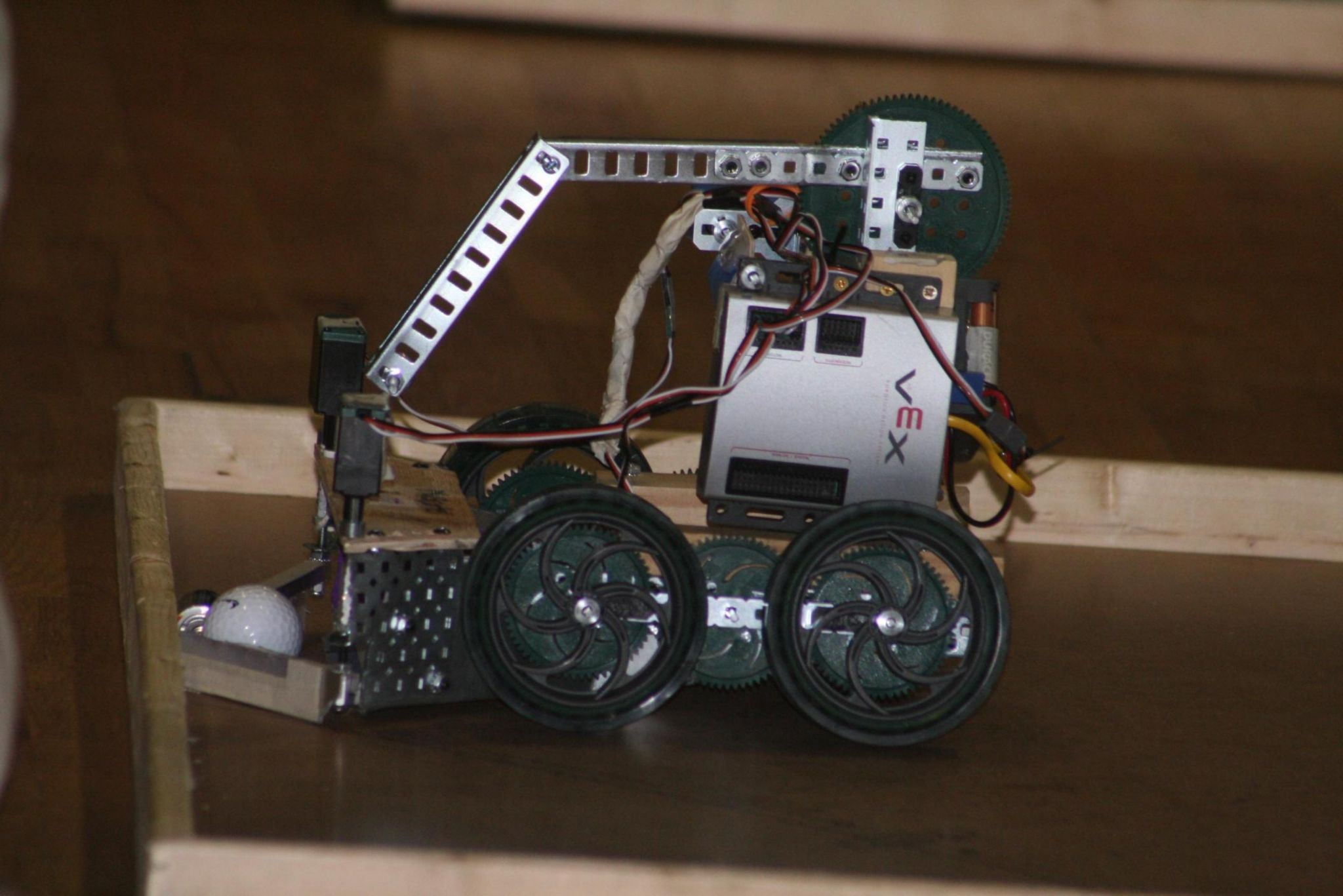 A suction cup method is like an arm and claw system, but instead of a claw, it uses a type of suction method to pick up objects. For example, a balloon could be used, sucking air in and out to secure objects. One of the pros of this system is that round objects (e.g. ping-pong balls) can be more easily picked up, whereas an arm and claw system, for example, may have a harder time with the spherical shape of a ball.

This is a neglected portion of the device. Many times,what will end up happening is that too much time will be spent on building the end effector or the grabbing and not enough time on the getting.

If you are making the robot with a kit such as the VEX kit, don't worry too much. If the device is a DIY or original design made from raw materials you may have a problem. When choosing the device make sure it is compatible with your getter device. For something like the door method you may just simply have a chassis with motors, etc. The most important thing to look for is torque in the motors and control. Your BEST shot would be to go to the hobby shop and ask them there what would be your best shot. They would already know the vehicles with the highest torque and everything else. Describe your problem. The reason why torque is needed is because your rc car may be fast, but try putting a load half the weight of the car on top of it... It may not live up to expectations. Speed is not important. Torque (power) is important. Also make sure that if you are using a getter that extends from the device and does not stay in the perimeter of the vehicle, that it has enough downward force to prevent the whole vehicle from tipping over when picking something heavy. The ideal wheels would be probably rubber or with very good grip and should be large enough to drive over the boundaries.

Summing it all up, if you want to make your vehicle not from a kit, look for high torque, excellent control, and good maneuverability especially in the tires.

Robots are usually powered by special motors called servos. Servos are special motors equipped with a gear mechanism set, and a potentiometer, a device that measures resistance. Servos are widely used by hobbyists and in robotics because of their relative ease to use, and one very special quality: The ability to hold its position. A normal motor spins continuously because it has no potentiometer, and no gears, and can be easy to stop, and can not hold their position; They just spin and spin. A servo, on the other hand, will hold its position when there is no action, and if any pressure is applied to the motor, something that is trying to move the servo horn or shaft, it will compensate by increasing pressure in the opposite direction. Two very important things to know about servos: One, they have to have a signal. Servos can not simply be powered by a simple battery, one wire in the negative, one in the positive. They must be powered by a signal, carried by the signal wire. A servo has three wires, two for power, and one for signal, a very special voltage pulse. Two, servos can only rotate 90 degrees. A signal pulse, unless modified by a speed controller, can only turn the servo 90 degrees (for most radios), and 180 for micro-controllers, etc. 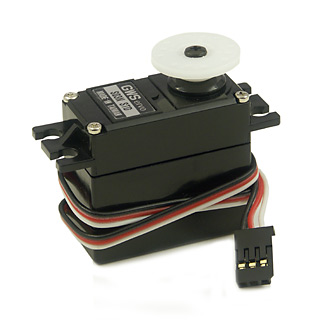 Radios are a set of two devices, one receiver, and one transmitter. They are used to control servos and motors. The receiver is well, the receiving part of the signal. This is connected to the device in question, and all the servos and motors are connected to the receiver. The receiver receives a signal from the transmitter, the remote in the user's hand that sends signals to control motors from the receiver. Radio Systems are found in usually 1 to 6+ channels, getting more expensive by each extra channel. The most popular, and now standard in Radio Systems are 2.4 Ghz Spread Signal Systems. These are very popular because its link can not be broken, and is nearly nearly impossible for there to be interference from other systems, even if they are the same brand. Note that the transmitter and the receiver must be part of the same brand to work. A receiver and transmitter of different brands will NOT work. Each channel on a receiver controls one servo or component, unless there is a Y-Harness connecting two servos to one channel. Even so, the signal will be identical with each motor, and will move identically. Note that for normal motors, not servos, to be used with a 2.4 Ghz receiver such as a car motor, the motor must be a brushless motor and not brush motors. You can find servos and radio systems and brushless motors at all R/C shops or websites.

See below for other radio frequency systems.

Before turning in your robot for impound, please check the following qualification parameters for your robot. Robots that do not meet these parameters may compete but will be ranked lower than higher tiered devices. Additionally, if a RC robot is operating on a band other than those mentioned on the www.soinc.org Robo-cross page, it is not in compliance with FCC regulations and may not compete in the Robo Cross event. Also, check to make sure that all parts (arms, claws, etc.) are inside the 28x28x28 cube beforehand. It may be easy for one of these parts to move and go outside of the cube if your robot has that capability.