Robot Ramble is an event in which participants must design and build a robot capable of performing various tasks. This event was first run as a trial event at the 2001 National Tournament for Division C, and was later run as an official event in the same division from 2002 to 2008. The robot competitors design must meet certain parameters, such as being under a certain size or controlled a certain way.

In 2005-2006, teams were required to navigate their robot on a 2 meter by 1 meter playing field picking up the following items: a standard CD, a golf ball, 2 ping pong balls, and 9 laboratory cork stoppers. These items were then required to be placed into a box closed on all sides except for the top.

The challenge was that this box was the same size as the maximum dimensions of the robot, and was also (if the team desired) filled with 3 balloons that could be popped for additional points. Any objects that left the playing field were considered out of bounds (can't be scored) and if the box was knocked over or pushed outside of the playing field teams could not score any points. Each item carried a certain point value, with the CD (the most difficult item to retrieve and transport) being worth the highest amount and the individual cork stoppers (the easiest item) being worth the smallest amount. If the items could not be placed into the scoring box, points could still be earned by transporting them over to the half of the playing field where such box was located.

A 2 minute time limit increased the already-stiff challenge, while also providing a means of tie-breaking in the event of a tie. Because of this element of time, it was not only important to strive for a perfect score, but also to ensure that the task was completed in the shortest time possible, creating a vital need for many practice runs and time for properly calibrating/adjusting the device. 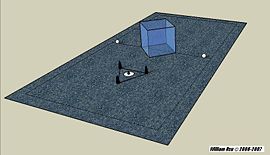 Building a board/playing field is a great starting place, as it ensures that competitors have a space to practice before the event. There are many ways to begin building and designing the robot itself, but the easiest way is with a mechanical construction set or a kit.

Some Ways to Pick Up Objects 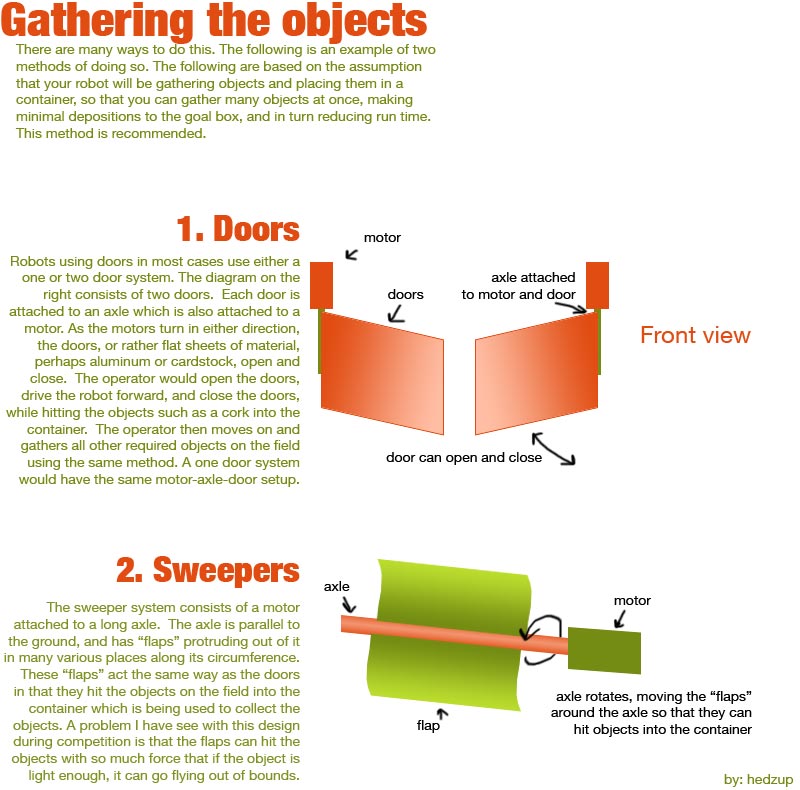 Feel free to add more to the diagram. The .psd file to edit the above image can be found here.

Before turning in your robot for impoundment, please check the following qualification parameters for your robot. Robots that do not meet these parameters may compete but will be ranked after those robots that do. Additionally, if a RC robot is operating on a band other then 27, 49, or 75 Mhz it is not in compliance with FCC regulations and may not compete in the Robot Ramble event.