The San Diego Regional is a regional tournament in the state of California. In Southern California, teams are restricted to a region based on location (although some regions, such as the Los Angeles region, host multiple regional tournaments that a school may choose from). In the 2020 season, the San Diego Regional Tournament was split into the San Diego Miramar Regional at Miramar College and the San Diego USD Regional at the University of San Diego in order to accommodate for the high number of teams. Before the split in 2020, San Diego was notable for being the largest regional tournament in the nation, allowing 6 teams per school to compete at around 100-120 teams per division. Each regional site hosts both Division B and Division C at the same tournament. The Division B regional was previously held had at Carlsbad High School from 2015-2018. The Division C regional was previously held at University City High School, but it was relocated to the University of San Diego for the 2019 season. In 2021, the San Diego region will once again be reunited, as SoCal will be holding all of its regionals on the same day. 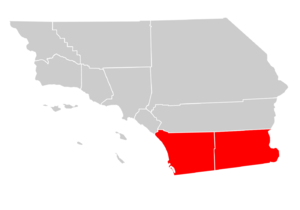