The Santa Barbara Regional is a regional tournament in the state of California. In Southern California, teams are restricted to a region based on location (although some regions, such as the Los Angeles region, host multiple regional tournaments that a school may choose from). The Santa Barbara Regional hosts teams from Santa Barbara, San Luis Obispo, and Ventura Counties at the University of California, Santa Barbara, and was created in the 2019 season due to the long distance that teams previously had to travel to attend the Los Angeles Regional. The Division C tournament was first held in 2019, and the Division B tournament was first held in 2020. Due to the special circumstances surrounding the 2021 season, this regional was temporarily recombined with the Los Angeles Regional in order to simplify logistics in the online testing format via Mini SO. 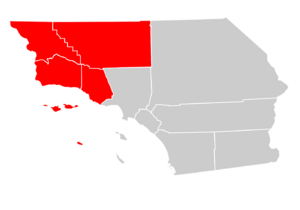