A diagram of a hurricane

Eye-a circular region of mostly calm weather at the center of tropical cyclones. It is usually 30-65 kilometers in diameter. It is also home to the lowest barometric pressure of the cyclone.

Eyewall-the area of intense rain and wind (the most intense in a tropical cyclone) directly adjacent to the eye. Multiple eyewalls may be present during the eyewall replacement cycle, in which rainbands near the original eye strengthen and organize to form a new eyewall (generally occurs in major hurricanes).

Rainbands-lines of clouds (and therefore precipitation) pointing toward the eye and extend outwards.

Geographical and Seasonal Distribution of Tropical Storms and Hurricanes

Tropical Cyclones form in the tropics about 500 kilometers (about 5 degrees) from the equator. They do not form near the equator because there is insufficient Coriolis force to induce counterclockwise (clockwise in the Southern Hemisphere) rotation. Although tropical cyclones usually can't sustain themselves in the temperate and polar zones, they can given that there is a large current of warm water present (e.g., the Gulf Stream). This is very important when considering the movement and strength of tropical cyclones. The Gulf Stream can allow hurricanes in the Atlantic to move up the Eastern coast of the U.S., while the North Pacific Gyre helps prevent hurricanes in the Eastern Pacific from moving up the Western coast.

Storm surge is simply water that is pushed toward the shore by the force of the winds swirling around the storm. This advancing surge combines with the normal tides to create the hurricane storm tide, which can increase the mean water level

15 feet or more. In addition, wind driven waves are superimposed on the storm tide. This rise in water level can cause severe flooding in coastal areas, particularly when the storm tide coincides with the normal high tides. Because much of the United States' densely populated Atlantic and Gulf Coast coastlines lie less than 10 feet above mean sea level, the danger from storm tides is tremendous.

The level of surge in a particular area is also determined by the slope of the continental shelf. A shallow slope off the coast (right, top picture) will allow a greater surge to inundate coastal communities. Communities with a steeper continental shelf (right, bottom picture) will not see as much surge inundation, although large breaking waves can still present major problems. Storm tides, waves, and currents in confined harbors severely damage ships, marinas, and pleasure boats.

The intensity of a landfalling hurricane is expressed in terms of categories that relate wind speeds and potential damage. According to the Saffir-Simpson Hurricane Scale, a Category 1 hurricane has lighter winds compared to storms in higher categories. A Category 4 hurricane would have winds between 131 and 155 mph and, on the average, would usually be expected to cause 100 times the damage of the Category 1 storm. Depending on circumstances, less intense storms may still be strong enough to produce damage, particularly in areas that have not prepared in advance.

Windows falling from a high-rise building

High-rise buildings are also vulnerable to hurricane-force winds, particularly at the higher levels since wind speed tends to increase with height. Recent research suggests you should stay below the tenth floor, but still above any floors at risk for flooding. It is not uncommon for high-rise buildings to suffer a great deal of damage due to windows being blown out. Consequently, the areas around these buildings can be very dangerous.

The strongest winds usually occur in the right side of the eyewall of the hurricane. Wind speed usually decreases significantly within 12 hours after landfall. Nonetheless, winds can stay above hurricane strength well inland. Hurricane Hugo (1989), for example, battered Charlotte, North Carolina (which is 175 miles inland) with gusts to nearly 100 mph.

The Inland High Wind Model can be used by emergency managers to estimate how far inland strong winds extend. The inland wind estimates can only be made shortly before landfall when the windfield forecast errors are relatively small. This information is most useful in the decision-making process to decide which people might be most vulnerable to high winds at inland locations.

Hurricanes can also produce tornadoes that add to the storm's destructive power. Tornadoes are most likely to occur in the right-front quadrant of the hurricane. However, they are also often found elsewhere embedded in the rainbands, well away from the center of the hurricane.

These tornadoes are different from the ones caused by supercell thunderstorms. Tornadoes spawned from hurricanes are usually less severe and destructive compared to supercell spawned tornadoes.

Some hurricanes seem to produce no tornadoes, while others develop multiple ones. Studies have shown that more than half of the landfalling hurricanes produce at least one tornado; Hurricane Buelah (1967) spawned 141 according to one study. In general, tornadoes associated with hurricanes are less intense than those that occur in the Great Plains Nonetheless, the effects of tornadoes, added to the larger area of hurricane-force winds, can produce substantial damage.

We have no way at present to predict exactly which storms will spawn tornadoes or where they will touch down. The new Doppler radar systems have greatly improved the forecaster's warning capability, but the technology usually provides lead times from only a few minutes up to about 30 minutes. Consequently, preparedness is critical.

When it comes to hurricanes, wind speeds do not tell the whole story. Hurricanes 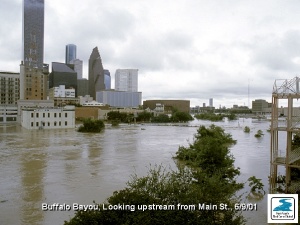 produce storm surges, tornadoes, and often the most deadly of all - inland flooding.

While storm surge is always a potential threat, more people have died from inland flooding from 1970 up to 2000. Intense rainfall is not directly related to the wind speed of tropical cyclones. In fact, some of the greatest rainfall amounts occur from weaker storms that drift slowly or stall over an area.

Inland flooding can be a major threat to communities hundreds of miles from the coast as intense rain falls from these huge tropical air masses.

Tropical Storm Allison (2001) produced extremely heavy rainfall and catastrophic floods in the Houston, Texas area. Allison then acquired subtropical characteristics and continued to produce heavy rainfall and flooding near its track from Louisiana eastward to North Carolina, and then northward along the U.S. east coast to Massachusetts. Forty-one deaths were directly related to the heavy rain, flooding, tornadoes, and high surf. Damage estimates reported by the Federal Emergency Management Agency (FEMA) were near $5 billion, with approximately $4.8 billion in the Houston metropolitan area alone. 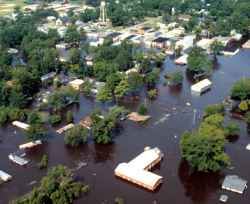 Tropical Storm Claudette (1979) brought 45 inches of rain to an area near Alvin, Texas, contributing to more than $600 million in damages.

At least 23% of U.S. tropical cyclone deaths occur to people who drown in, or attempting to abandon, their cars.

78% of children killed by tropical cyclones drowned in freshwater floods.

The Saffir-Simpson hurricane wind scale (SSHWS) rates hurricane intensity based on 1-minute sustained wind speed. The SSHWS is applied specifically to hurricanes (not typhoons or cyclones). Hurricanes category 3 or higher are also referred to as major hurricanes.

The life cycle of a hurricane:

Tropical Disturbance: A tropical disturbance is the start of a hurricane or tropical cyclone. Slight circulation, with organized thunderstorm activity 100-300 miles in diameter, and maintains it's identity for at least 24 hours.

Tropical Depression: An organized system of clouds and thunderstorms with a defined surface circulation and maximum sustained winds* of 38 mph (33 kt**) or less

Tropical Storm: An organized system of strong thunderstorms with a defined surface circulation and maximum sustained winds of 39-73 mph (34-63 kt)

Hurricane: An intense tropical weather system of strong thunderstorms with a well-defined surface circulation and maximum sustained winds of 74 mph (64 kt) or higher

A hurricane, or any other tropical cyclone, derives its energy from the release of latent heat, which occurs when water vapor condenses. That is why they need to exist over large, warm bodies of water in order to grow or maintain themselves. Usually, the latent heat released in this way in tropical thunderstorms is carried away by wind shear, which blows the top off the thunderstorms. But when there is little wind shear, this heat can build up, causing low pressure to form. The low pressure causes wind to begin to spiral inward toward the center of the low.

Hurricanes often begin their lives as clusters of clouds and thunderstorms called tropical disturbances. These low-pressure areas feature weak pressure gradients and little or no rotation. Most of these disturbances die out, but a few persevere down the path to hurricane status. In these cases, the thunderstorms in the disturbance release latent heat, which warms areas in the disturbance. This causes the air density inside the disturbance to lower, dropping the surface pressure. Wind speeds increase as cooler air rushes underneath the rising warm air. As this wind is subject to the Coriolis force, the disturbance begins to rotate. The incoming winds bring in more moisture, which condenses to form more cloud activity and releases latent heat in the process.

Between 80 and 100 tropical storms develop each year around the world. Many of them die out before they can grow too strong, but around half of them eventually achieve hurricane status.

Once a hurricane has formed and intensified, the only remaining path for the atmospheric juggernaut is dissipation. Eventually, the storm will encounter conditions that deny it the warm, moist air it requires. When a hurricane moves onto cooler waters at a higher latitude, gradient pressure decreases, winds slow, and the entire storm is tamed, from a tropical cyclone to a weaker extratropical cyclone that peters out in days.

A large band began to evolve into an almost perfectly symmetic CDO around a 10 nautical mile wide eye, allowing a period of very rapid intensification. Patricia became a major hurricane at the end of the 24 hour period on October 22nd and a solid ring of cloud-top temperatures colder than -90 degrees Celsius had formed by 0300 UTC 23 October. Patricia became an extremely powerful hurricane with maximum sustained winds of 180 kt (about 195 mph) and a minimum central pressure of around 879 millibars, reaching a peak intensity of 185 kt around 1200 UTC centered 130 nautical miles southwest of Manzanillo, Mexico.

However, despite the rapid intensification, Patricia started to quickly weaken as it encountered the mountains of western and souther Mexico, helped by the development of a double eyewall and increasing southwesterly vertical wind shear. Patricia weakened to about 130 kt on October 23 as it approached the southwestern coast of Mexico in Jalisco and made landfall later that day. It fell below hurricane strength as it moved over the high terrain of the Sierra Madre mountains and weakened to a tropical depression overnight, dissipating later that morning over central Mexico.