This page is for the Severe Storms topic of the Meteorology event.

Graupel, sleet, hail, rain, freezing rain and snow are all considered forms of wintry precipitation [1]. Winter storms can bring several of these in one passing, depending on elevation and surface temperature changes. Winter storms also cause a number of hazards, which will be detailed below. As a result, winter storms can be dangerous, especially for those in areas where heavy snow is uncommon. Most of the time, however, more than 6 inches of snow will begin to create unsafe conditions anywhere, regardless of the frequency of snowfall.

Some of the key dangers of all winter storms include hypothermia and frostbite due to the cold, and also car accidents due to unsafe road conditions.

Characteristics of a Blizzard

In order for a snowstorm to be classified as a "blizzard" it must have all of the aforementioned characteristics. Once these conditions are expected, the NWS (National Weather Service) will issue a "blizzard warning." When some, but not all, of these conditions are expected, a "Winter Storm Warning" or "Heavy Snow Warning" may be issued. A "watch" is issued when severe winter weather is probable, but not necessarily imminent. An "advisory" is issued when less-serious conditions are occurring, imminent, or there is a high probability.

Blizzards most often occur in the upper Midwest and Great Plains of the United States. This is because of flat land. Conditions of a blizzard develop on the northwest side of an intense storm system. The lower pressure in the storm and the higher pressure to the west's difference creates a tight pressure gradient, meaning a difference in pressure between two locations resulting in very strong winds. The winds can then pick up snow off the ground or blow falling snow creating low visibility and a chance for significant drifting of snow. A ground blizzard is a weather condition where snow is not falling but loose snow on the ground is lifted and blown by strong winds. Strong winds/cold temperatures combine to create danger, such as the wind chill factor which can drop to –60F during blizzards in the Midwest.

A blizzard's main dangers are its strong winds, freezing temperatures, and deep snow. However, avalanches may also be a potential danger if a location is in a mountainous region.

When a blizzard hits:

A northeaster, generally called a "nor'easter," can occur at any time of the year. However, these storms are most frequent and most powerful during the months from September to April, and are most often associated with winter. This type of winter storm is named because the majority of the wind during the storms comes from the northeast: hence, "nor'easter." The winds blow most strongly in this direction because these storms are large-scale cyclones centered a low pressure system, rotating counter-clockwise. Nor'easters exclusively occur on the East Coast of North America, and typically progress towards the northeast direction. But, Northeasters can form up to 100 miles east of the East Coast and still strike many eastern seaboard cities, according to the National Weather Service[2]. Rain, snow, sleet, and freezing rain can all be associated with these storms.

Flooding and blizzard conditions are possible with these storm systems, and can cause crippling damage to large regions of the Eastern seaboard. The economic- and transportation-related damage, including massive power outages and car accidents, can exceed a billion dollars. Some storms can leave millions without power. 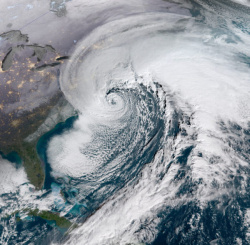 This satellite image shows a Nor'easter that occurred in January 2018.

During winter, the polar jet stream moves Arctic air to the east area of the U.S. where warm air is moving upwards.

This weather event is a common occurrence across the Great Lakes region during late fall and winter. Although most commonly associated with freshwater lakes, this effect can also occur near salt-water bodies of water such as bays, salt lakes, seas, or even oceans.

Lake-effect snow occurs when cold air moves across the warmer water of the lake. This allows moisture to be transferred to the lowest part of the atmosphere. Then, the warm air rises, leading to cloud formation. As the clouds begin to accumulate more and more moisture, they grow larger. Eventually, they are capable of producing snow, which is then deposited on the downwind, or leeward, side of the lake. It usually takes the form of narrow bands characterized by intense snowfall and limited visibility. On occasion, sunny skies can quickly be replaced by blizzard-like conditions, such as blinding and wind-driven snowfall, in just a few minutes. It is extremely dangerous to motorists and pedestrians alike. 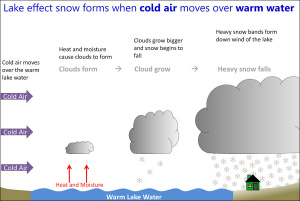 This image shows the process by which lake-effect snow falls. Taken from NWS page

Updrafts in thunderstorms carry raindrops up into very cold places in the atmosphere and freeze, creating hail. It can be dangerous to aircrafts, homes, people, livestock, and cars. The number of times a hailstone traveled to the top of the cloud can be counted in the layers. The stones can melt and refreeze creating strange shapes. Once the hail can no longer be supported, it begins to fall. Hail swaths are where hail falls a lot, sometimes requiring snow plows. Radars, such as the Doppler-radar, can detect hail as looking like very, very heavy rainfall. Dual-polarization radar technology also can detect it.

Freezing rain can be extremely dangerous, since the result is a layer of ice instead of snow. It can create slick spots on the roads, and places added weight on tree branches and power lines, which can cause them to snap. Even for places that are accustomed to snow storms, as little as 1 cm can completely paralyze a city. Dangers including driving, telephone and electrical wire damage, and falling. This precipitation can also cause entire crops to be destroyed.

Sleet (or ice pellets) is made of small, translucent balls of ice. They are rain drops that have frozen before they reached the ground, which occurs when the layer of cold air is thicker than it is for freezing rain. When a layer of subfreezing air near the ground goes high enough, raindrops freeze into little balls of ice before reaching the ground. These pellets of ice usually bounce after hitting the ground or other hard surfaces. It can sometimes be accompanied by freezing rain.

A Winter Storm Warning is issued for sleet or a combination of sleet and snow based on total accumulation, which is locally defined by area.

Snow is precipitation in the form of ice crystals. Snow forms from supercooled (also called undercooled) water, which means the liquid or vapor in the atmosphere can avoid freezing at extremely cold temperatures. This allows it to form a crystalline structure around a particle that can act as a nucleus, or seed. Common particles that act as crystal seeds in clouds include dust, clay, and biological material, although ice itself can serve as a seed. These droplets then grow into hexagonal crystals by nucleating around those particles inside clouds. The clusters of ice crystals that fall from a cloud to the Earth are what we generally call snowflakes. Snowflakes form in a variety of patterns based on the crystal structure.

Snow is less dense than liquid water, though the factor varies greatly depending on formation conditions. Snow to Water ratios indicate the amount of snow needed to be melted to be equivalent to an inch of rainfall. These ratios vary as well with the temperature and current humidity, though it usually ranges between 10:1 and 12:1 [3].

Snow is composed of frozen water, meaning it technically can be classified as a mineral.

Rain is liquid drops of water that fall to the ground and don't freeze. Water condensed in clouds must be heavy enough to fall from clouds, and droplets often collide with others or grow as water condenses out of the air into the droplet until the droplet is large enough to fall. Precipitation that falls to earth in drops more than 0.5 mm in diameter.

Frontal rain forms when two air masses meet, e.g. when warm air cools and condenses. Orographic rain is made because of clouds that form because of topography, where high ground forces moist cool air up. It is most likely to occur near mountains with westerly prevailing winds.

Graupel comes from German, literally meaning soft hail. Thus, this form of wintry precipitation is also known as snow pellets or soft hail. According to the National Weather Service's glossary[4], snow pellets are essentially what the name implies: small(between 2 and 5 mm in diameter), round, cloudy to white colored ice crystals. Some people colloquially call this precipitation "tapioca snow," since the pellets are similar in appearance to tapioca.

Graupel occurs when supercooled water molecules in the air crystalize around a falling snowflake[5]. The coating that surrounds the snowflake is called a "rime" or "rime coating,"[6], so named because riming occurs when droplets freeze and crystallize on the surface of an object. Generally, this process only occurs when it is exceptionally cold at ground level, allowing for the supercooled droplets in the air. Interestingly, it appears to form much more frequently when a thunder-snowstorm is present, although no updraft is necessary for graupel to form.

Disaster kits are an important part of disaster preparedness. The following are possible items to include in a disaster supply kit for a location prone to severe winter storms.

Between the 22nd and 24th of January 2016, Winter Storm Jonas, also known as 'Snowzilla,' produced totals of up to three feet of snow in parts of the Mid-Atlantic and Northeastern United States. This storm, the first of its kind since the 2011 Groundhog Day Blizzard, qualified as a Category 5 blizzard in the Northeast, and even qualified as a Category 4 for the Southeast. These ratings were from the more recent Regional Snowfall Index, or RSI, which is similar to other scales in use by meteorologists. It takes into account snowfall in a region, how much area the storm covers, and the relationship to population in the area.

Originating from a shortwave trough, the system consolidated into a defined low-pressure area on January 21 over Texas. Meteorologists claimed that this could be a historic blizzard and quickly indicated the storm could produce more than 2 ft of snow across the Mid-Atlantic region. From January 20 through 22, eleven states and the District of Columbia declared a state of emergency in anticipation of significant snowfall and blizzard conditions. More than 13,000 flights were cancelled in relation to the storm, and a travel ban was instituted for New York City and Newark, New Jersey for January 23–24. Ice and snow covered roads led to accidents across the region, several of which resulted in deaths and injuries. 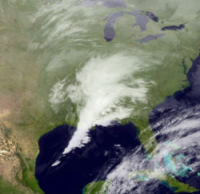 A meteorological image showing the formation of Winter Storm Jonas in Jan 2016. 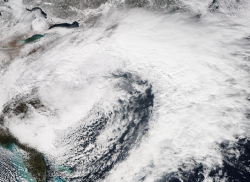 A satellite image of the blizzard near its peak in Jan 2016.