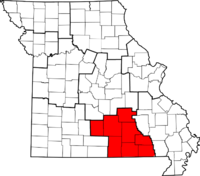 A map showing the counties that Region 9 served

The South Central Missouri Regional Tournament was a regional tournament for the state of Missouri that served Region 9. In 2011, the Missouri Science Olympiad Board of Directors proposed a plan to re-district the state so that no team would have to drive more than 75 minutes in order to attend a regional tournament. As a result, a ninth region would have to be added. This redistricting was initially postponed due to funding restraints, but came into effect for the 2012 season. While no tournament dates have been recovered as of yet, the region was listed on the Missouri State Science Olympiad website until 2015, when Missouri was once again broken up into eight regions. The regional served the counties of Carter, Dent, Howell, Oregon, Ripley, Shannon, Texas and Wright during its lifespan, which now belong to regions 7 and 8.