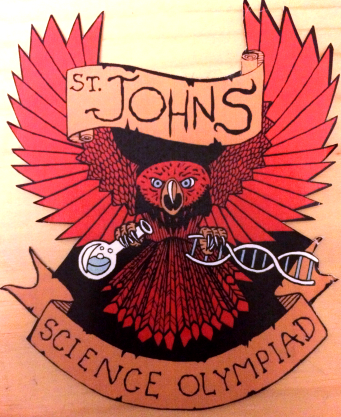 St. Johns is a small town in mid Michigan with two high school Science Olympiad teams. They are known for their elegant T-shirt design.

They compete in Region 11, Division C.

Founded many years ago by a number of students who were tired with the Science-Olympiad-empty lives in which they lived. The team has had its peaks and troughs, expansions and contractions. It is filled with stories of long known success and last minute victories, but also rebuilding years. There are two teams based out of the same classroom: Mr. Lund's room 114. The varsity team is named "Pure" and the junior varsity team is named "Applied"―for pure and applied science respectively. However, the team names have nothing to do with which events they compete for in competition. The team takes on up to four middle school students from SJMS as "apprentices". Practices are from 3:00 to 4:30~5:00 on Tuesday, Wednesday, and Thursday. Optional practices on Fridays exist in higher and higher frequency as an invitational, regionals, or states approaches.

Typically, Applied team members will not compete in certain events (chemistry lab, technical problem solving, protein modeling) either because of the difficulty of the event or because of expensive needs required for the event to be competitive with surrounding schools. Get-togethers are held at assistant coaches house or at a current member's parents' house every weekend.

This section is a stub. You can help St. Johns by expanding it.

The objective of the team captain is to lead by example (and to maintain the wiki page). The following list includes the captains of each season: