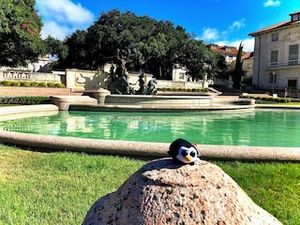 A picture of a stuffed animal penguin in front of the fountain at the University of Texas Austin on a beautiful sunny day.

A former Jeffrey Trail MS competitor who is currently a freshman at Northwood HS. Displays ineptitude on a daily basis, along with a failure to understand basic common sense.

What events do I compete in?

In 7th grade, I did Heredity, Experimental Design, Anatomy (at the last invite), and Circuit Lab (although I never competed). I was woefully unskillful in all of them, as evidenced by the fact that I gained more medals being a filler for build events than I earned myself. That same friend carried me to a whopping 33rd place in Anatomy in our last invitational.

In 8th grade, I did Codebusters/Game On, Heredity (never competed), Experimental Design, and Anatomy. This year was most prominently marked by my promising downwards linear progression of my Game On placements. Heredity was the epitome of my hubris, and I will not explain any further.

In 9th grade, I did Anatomy, Astronomy, Experimental Design, and Codebusters. Astronomy is what happens when you decide to do an event because your team needs help in it and you think it can help you make the team. My proudest achievement this year is a trial regional Game On medal, and greatest disappointment is the inability to get a trial state Game On medal.

What is the meaning of life?

Not quite sure, I'll tell you once I finally beat Troy in something. In other words, I'll get back to you after graduation.

Overview of my SciOly Career

At the JT/Kraemer scrimmage, my first ever comp, I placed 6th in circuit and 6th in experimental. After fading into obscurity in 7th grade and being relegated to the second team, my first invitational was Carmel Valley, where we got to watch Arthur Benjamin (Ted Talk) try and overprice books that he wrote. Mesa Robles was also relatively insignificant, but I got my first medal by helping my friend with his ELG. At Kraemer invitational, I finally earned a medal myself, and gained another through ELG.

In 8th grade, we started preparing earlier in the year, which ultimately meant more time to goof off. At the JT/Kraemer/OSCA scrimmage I displayed my Game On potential (1st baby!), along with placements in Code (2nd), Anatomy (3rd), Experimental (2nd). My heredity career ended with a pitiful 6th (this was supposed to be my best event). I managed to blow a lead of over two minutes on the timed question for code, and had to write an entire EXPD test by myself in 50 minutes. We started off the season in Texas, and I earned 3rd in Experimental and 2nd in Anatomy. We won first place overall, but we were unaware that we wouldn't win another invite until regionals. We capped off a successful invitational and trip to Texas by eating... Indian food, in Texas. Most people would eat something that is more known in Texas, such as steak, but instead we decided to have Indian food we already have back in California. I'm not salty. We then flew up to Sacramento to get absolutely steamrolled by Kennedy. In the last invitational, I had unsuccessfully created a strange flying bird with acceleration, so for Kennedy we decided to pull something completely different and make an accelerating fish. This saw little success, unfortunately, and I have no idea why.

To start the next year (to be known forever as 2020), we flew up to Sacramento again for Mira Loma. Another accelerating bird later, we amazingly did not place in Game On. We also got tiered in Experimental Design for being off topic. However, thanks to Mira Loma sending out everyone's Game Ons, we may or may not have redesigned Kennedy's design. We participated in Mesa Robles invitational down in Southern California, and unfortunately someone was sick. Ironically this was my best invitational yet, placing 1st 2nd and 2nd in Expd, Code, and Anatomy (We lost to our second team) respectively. At Jeffrey Trail invitational we crept closer to Kennedy. By that, I mean we managed to lose to all three Kennedy teams and our second team as well in Game On. Thanks to Umaroth (or his teammate, idk), we also took the most fun code test of all time, featuring 2600 point aristocrats with z being the most common letter. Predictably, my partner could not read his own handwriting and because of that we couldn't solve the timed question. At Kennedy Invitational, I managed to finally win Game On through the topic of Heredity (irony, huh?). The replica has been created here https://scratch.mit.edu/projects/373627622. They allowed 3 people for Codebusters and we brought two, but due to my stupidity we didn't try and rob a third medal for our 2nd place. At regionals, we finally won Codebusters now that Kennedy wasn't there to destroy us.

In 9th grade, I joined the Northwood high team through the team tryouts. Because of the replay, most of my events stayed the same as the previous year. By the end of the year I did the exact same events as last year.
I did relatively well at BearSO, receiving colors of medals I never knew existed. At Rickards, we managed to get 6th in Fermi with no prep and also 1st in Code. I also soloed Astronomy, so my 16th place truly (definitely) displays my overall skill. At Mira Loma we earned the worst possible placement (7th) in Code because the ES told us we solved the timed question right when we absolutely didn't. At GGSO, we placed 6th on a code test based on misspelled aristocrats, but that was the only time that competition that anyone on our team placed. This was my first Anatomy competition this year, and as such I was treated with a load of histology questions.
At regionals, the team as a whole bounced back. I got a 1st place Game On medal with this beaver game on (sike I'm not giving away industry secrets). The Codebusters test writers were nice and decided to make the longest test possible. We also caught a break and got first in Experimental Design, but my lack of knowledge about PTCH1 prevented me from doing anything in Anatomy.
This year was the first year I competed at states. In Codebusters, we managed to persevere through a test full of BTS quotes and entire chunks of song lyrics to place first. I'm not sure how we got second in Anatomy, but maybe the 20 questions of matching helped.

As you can tell around the 8th grade year my brain fried and I ran out of good jokes to make. I will revise this again later.

Here are some things to give a perspective to this timeline:
Fortnite was played at the 2019 and 2020 JT scrimmages.
Songs such as Old Town Road were new and exploded at the end of the 7th grade year.
Among Us died around the time BearSO medals arrived.
No other medals arrived as of April 15, 2021, including Rickards from December. 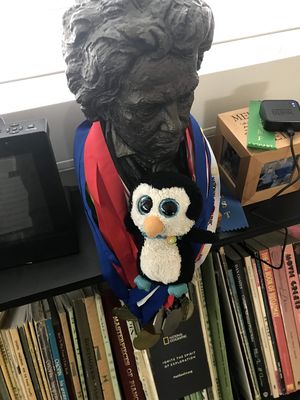 Medals on a Beethoven bust following the 2019-20 season. I'll look to continue this each year.

3 Denotes trial event and did not receive medal, b/c top 3 medals

Please leave your reviews down below: