Ivan Hogan competed for West Michigan Aviation Academy in Region 12 in Division C in Michigan. He graduated in May 2021. As a middle school student he competed for Chandler Woods Charter Academy where he spent 3 years on the Rocket Team. His top finishes at State were: 2021 - 3rd Machines; 2019 - 3rd Sounds of Music, 5th Boomilever, 7th Circuit Lab, Fermi Questions, Thermodynamics; 2018 - 8th Optics; 2017 - 1st Bottle Rocket, 8th Rocks and Minerals; 2016 - 6th Crave the Wave. In his spare time he enjoys biking, CADing, 3D-printing, milling, retro-computing and he had been known to play piano. 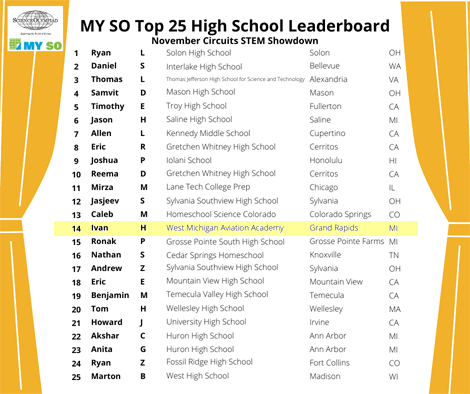 An arc of medals from 7 seasons of competition

I only won one award my first year - a 5th place ribbon in Crave the Wave. I've had my share of heartbreak in defeat, but after 7 years of competition, even though my teams didn't make it to Nationals, I can't complain.

I served as Treasurer of the WMAA SLT since the inception of the office, serving for 3 Seasons {Sophomore, Junior and Senior year}. I helped craft the SLT bylaws, working alongside the other officers {Community Liaison, Secretary and Quartermaster} as well as the Team Captain. During my tenure, the SLT organized and sponsored the team T-shirt contests, numerous team building events and fundraisers. The SLT was also responsible for the Spring Awards Banquets, Summer & Fall recruitment efforts, and hosting the Science Olympiad table during parent nights and new student orientation. I'm proud to have served the team as a competitor and as an elected Treasurer.

In room 209 on 1/31/2015 at 9:00am as a 6th grader, Ivan began his Science Olympiad tournament journey by getting a perfect score of zero points in the Road Scholar event with his partner on the B-Team, Brayden. In spite of this, Ivan & Brayden got 26th place out of 29 teams, thanks to 3 no-shows. Ivan did not make the A-Team his six grade year.