Mrgreencacti competes on the Portola High School Science Olympiad team. He also writes tests and volunteers to proctor at certain tournaments and competitions, as he has done throughout all of his years doing Science Olympiad.

Mrgreencacti was a student at Jeffrey Trail Middle School in the 2016-2017 and 2017-2018 years. He joined Science Olympiad in his 8th-grade year (2017-2018) and was on the "Blue Team," or competition team for all competitions. He was part of the first generation of students at Jeffrey Trail to win first place in the Southern California State Tournament and advance to the National Tournament.

In June 2020, the summer leading up to his junior year, Mrgreencacti was chosen through election and interview processes to become one of two captains for the Portola SciOly team. 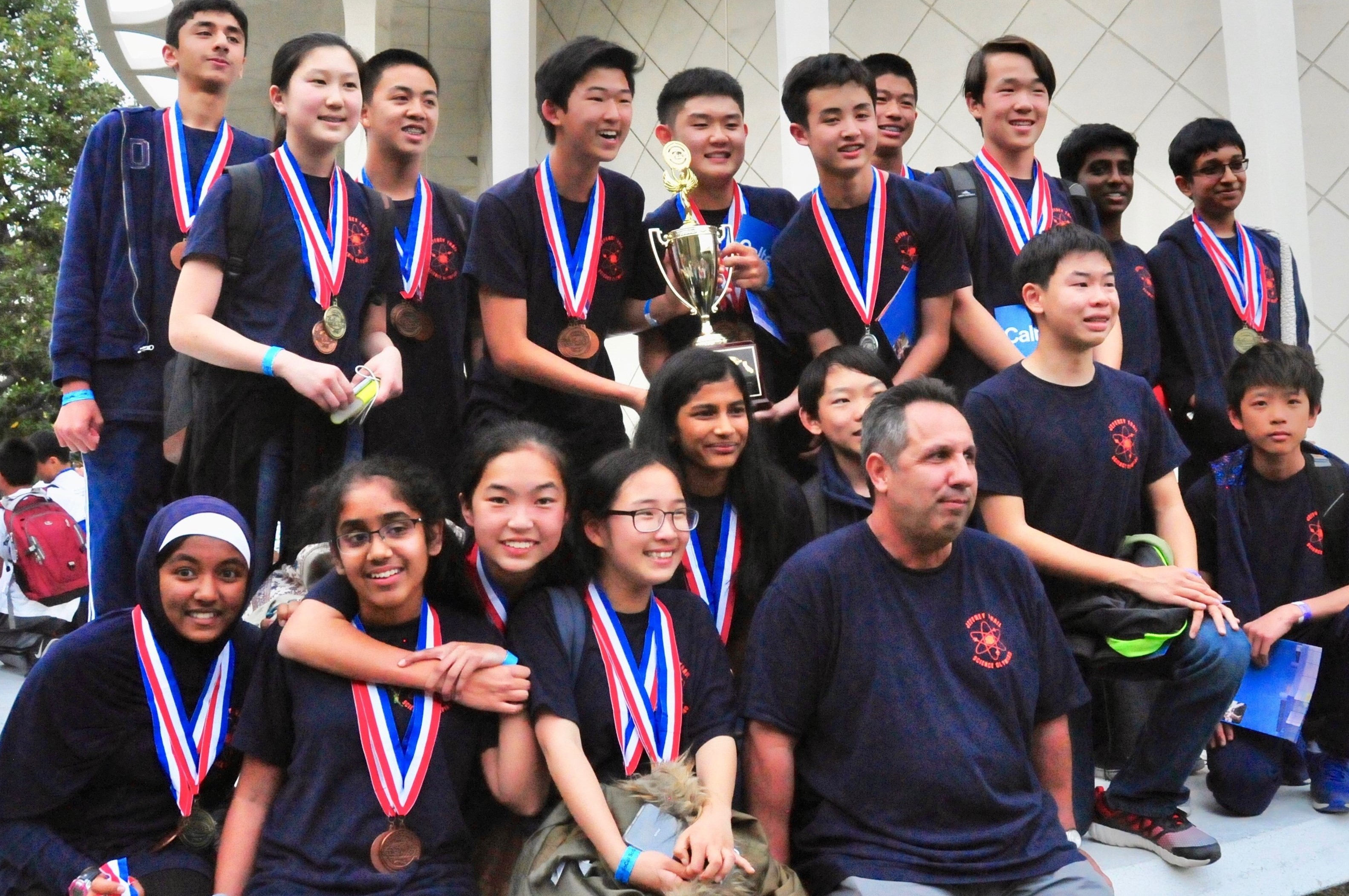 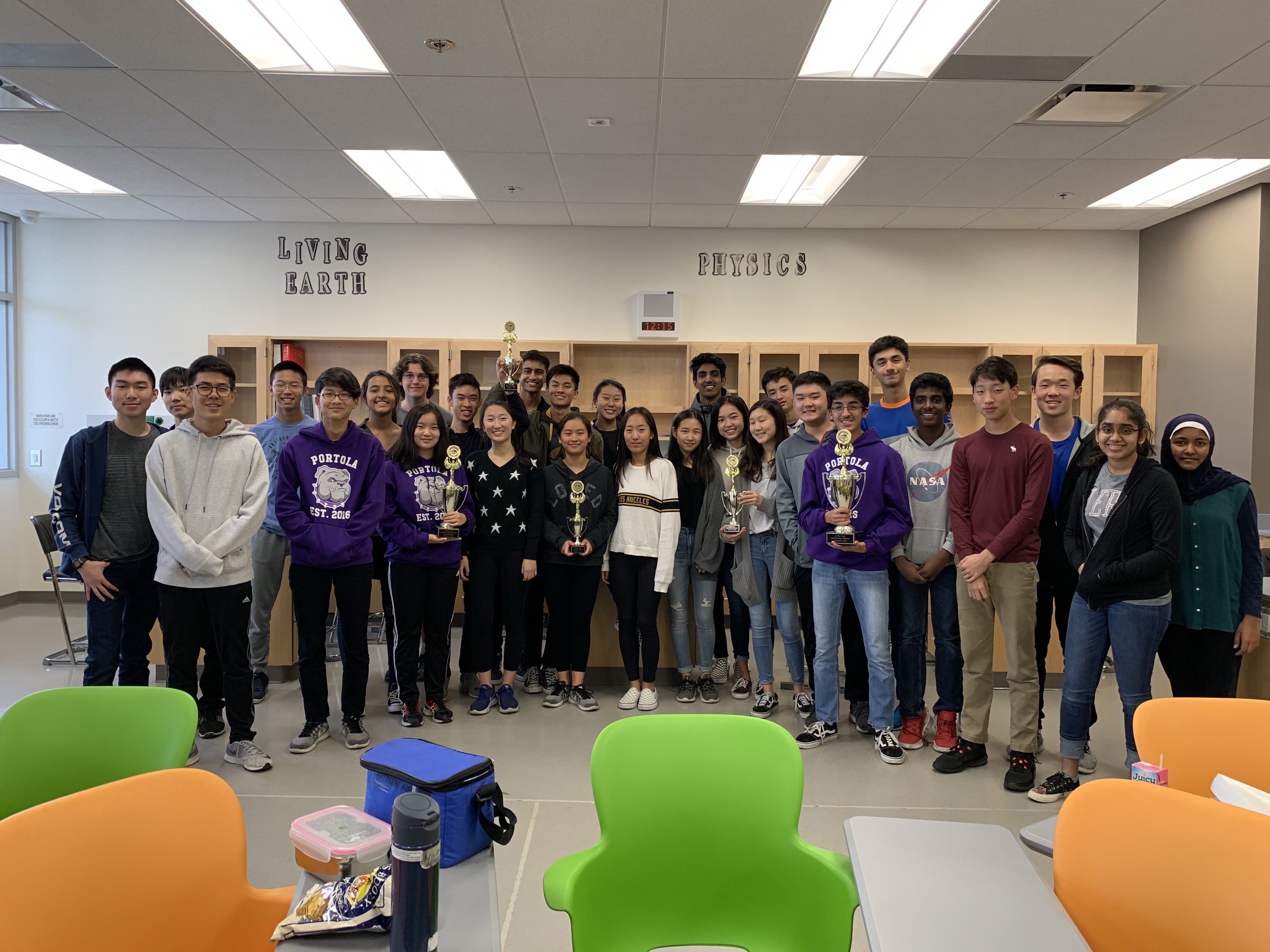 Mrgreencacti poses with the rest of the Portola Science Olympians at the start of the 2018-19 season. 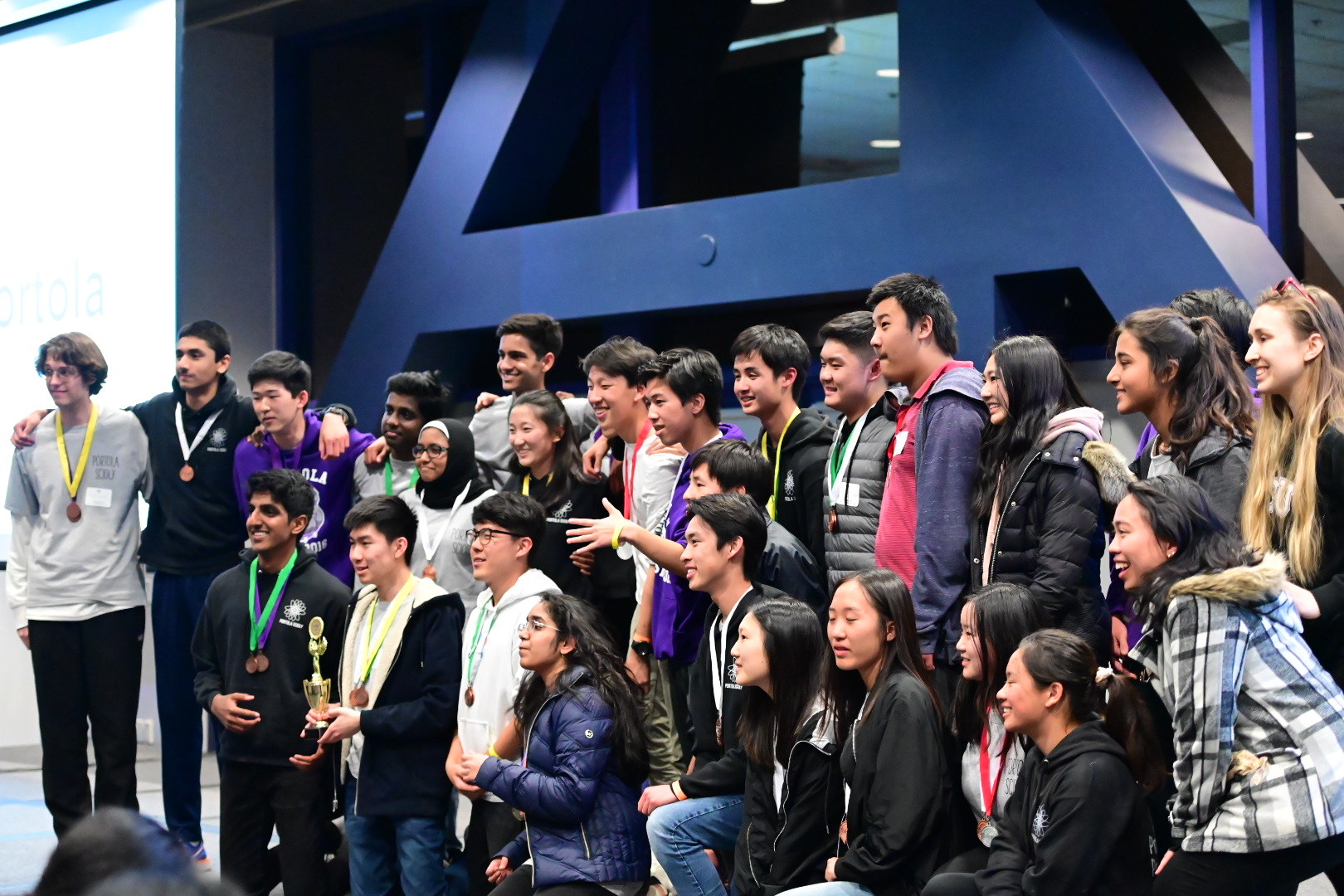 Portola SciOly at the 2020 OC Regional competition. Both A Team and B Team are present.

1: biggest tournament of all time with 203 Div C teams

This section goes over the experience that Mrgreencacti had in each of his main events, from his own 1st person point of view.

I was in Hovercraft in 8th grade. I chose hovercraft mostly because the name sounded cool to him at the time. I started off learning the basics of what was on the rules and was taught by a certain unnamed mentor kinematics and collisions. This was my first exposure to physics. Around the same time, a hovercraft demonstration was done by a more experienced Science Olympian. At the time, I mostly thought that it was loud.

Having been second best in weekly testing for the study portion of the event, I was chosen to be on the blue team for Hovercraft. I continued to study the mechanical physics involved with the event, writing numerous practice tests and compiling the team's binder. I also spent many hours afterschool with my partner (who actually built the hovercrafts), testing, mainly for balance, arranging the penny stacks and nuts in different positions so that the hovercraft travelled the distance of 60 cm at around the target time of 15 seconds. It was frustrating work -- the hovercrafts were inconsistent in their performance, which varied greatly depending on the level of the batteries, which, upsettingly, ran out of power very quickly and had to be recharged frequently.

At my first ever invitational at Ladera Vista, I (with the help of my partner) earned my first ever medal -- 2nd place. From there, we placed at every competition except for state (bad luck) and nationals (7th place!).

Originally, I chose this event also because the name sounded cool. I started to study the topics involved, such as heat transfer, phase change, temperature, heat, and even things I had never heard of before, like entropy. At the same time, I and another Science Olympian started to work on the build portion of the event (separately). At the time, I reasoned that it would probably be easier to make a stationary insulation box than a working, complicated hovercraft. I tested all sorts of materials and judged their performance during 30-minute tests, comparing the final temperatures of water inside and outside the box. I did this in competition with the other Science Olympian, and the two of us regularly did these 30-minute tests on their own boxes that they filled with materials. These started from cotton balls and Styrofoam and advanced to polyurethane foam and Spaceloft aerogel. By the end, although my box was slightly less good (as proven by tests) than the other Science Olympian, because my Kraemer Scrimmage scores were higher, I was chosen to compete in Thermodynamics for the Blue team, with another Science Olympian who was a god at the study portion of the event.

At the first invitational, Ladera Vista, I accidently did a construction violation. The polyurethane foam had expanded to above the height limit for the box, and pushing it down counted as a "modification." So they got 14th place and I feared I would be kicked off the team. However, I stayed on the team and continued to place at all the invitationals and regionals.

By this point, the design for the box had been set in stone. A plywood box with layers of polyurethane foam inside, Spaceloft aerogel inside that, and reflective aluminum tape adjacent to the beaker with a polyurethane lid on top. With this box, I did over 200 total 30-minute tests, testing within the parameter ranges for temperature -- 60-90 degrees Celsius and 50-150 mL of water. After regionals, I devised a plan for the ice water bonus, which I would only use if the volume of water and initial temperature were significantly high enough to make a positive heat score tradeoff. This was tedious, and it was inconsistent throughout the entire process.

At state, my partner and I got 2nd place, one-upping Kraemer Middle School. At nationals, we got 3rd place, and this will remain my first and last nationals medal ever. Memorably, their prediction for final temperature was only 0.6 degrees off; however, Kennedy claimed theirs was 0.1 off. Kennedy won 2nd.

I continued with Thermodynamics in 9th grade. I developed a new method to predict final temperature using Newton's Law of Cooling and the exponential decay model that came with it. I did over a hundred tests and determined the k-value for cooling at different volume parameters (75-125 mL that year) and tested at different initial temperatures (60-75 degrees that year). I was sad to learn that the ice water bonus that had helped out so much at state and nationals the previous year was not a part of the event that year.

I also improved upon the design of the previous year. Division C Thermodynamics called for an even smaller box (15x15x15 cm compared to 20x20x20 cm for Division B). I took a thin cardboard box so as to not take up too much volume, and tested various polyisocyanurate (PIR) foams for insulation, eventually settling on Thermasheath from The Home Depot as a replacement for what had been polyurethane (PUR) foam the previous year. The layer of Spaceloft Aerogel stayed, and the lid was made of PIR (not Thermasheath, though) as well.

I worked together with the original science Olympian from Jeffrey Trail who had been in direct competition with him the previous year and together, they placed at every competition except for Mesa-Wilson. Notably, their prediction for final temperature at state was 0.0 degrees off the actual value, but they still got 5th place.

After Hovercraft went out of rotation in my 9th grade, I looked for another physics event to study for, and so I did Circuit Lab. I spent much of my two free periods at school writing notes for the event. I started by copying and pasting the study portion of the rules into a document. I took notes on every topic mentioned, organizing the notes by headers, subheaders, and even smaller subdivisions. I studied DC and AC power, Ohm's law, electrical properties such as resistance, current, voltage, and power, Kirchhoff's Laws, electric and magnetic fields, capacitors, logic gates, operational amplifiers, RC circuits and more. I studied relevant definitions and wrote down countless formulas and equations. These notes, over the course of several months, grew and eventually I had covered all topic areas defined by the rules. I added a table of contents and this document of notes became the binder for Circuit Lab.

Circuit Lab also had a lab portion, separate from the study. This meant performing a hands-on task on-site such as constructing a solenoid, creating series and parallel circuits on a breadboard, lighting LEDs, measuring time constants of RC circuits, and more. Therefore, I studied ammeters, voltmeters, and ohmmeters, as well as bought my own breadboard kit to experiment with various components, such as batteries, resistors, capacitors, transistors, LEDs, buzzers, and more.

I was eventually paired up with a partner with an even higher weekly testing average. We worked together at each competition and medalled in every competition except at state. Throughout the competitions, we studied their tests and took notes on new concepts in our binder to further broaden our knowledge.

In 10th grade, I continued to participate in Circuit Lab, and by the end of weekly testing, I and the same partner were chosen to compete for the A team. They adjusted their binder to account for slight changes in the rules and continued to compete and acquire new knowledge and experience in the lab portion.

By 11th grade, with the rerun of this event preventing it from rotating out, I had already forgotten much of the content for the event. Without a lab portion, scores would be determined solely by the written test, which could be seen as either a good or bad thing. For this year, I planned on studying more comprehensively and cohesively, rewatching videos, learning more advanced content, and reading textbooks.

A "fermi question" is a question that seeks an immediate, imprecise estimate of a value. For example, how many piano tuners are in Chicago? At first, this might seem impossible to answer, especially without being given additional information. But using rough estimates and calculations, one can find an answer in the same order of magnitude as the true answer (the answer is 290).

In the Fermi Questions event, answers are given in powers of 10. Instead of writing "10^3," one would just write "3." Points are given based on how many orders of magnitude the answer is from the correct answer. Zero orders off is five points, one order off is three points, two orders off is one point, and any more orders off is no points.

Fermi Questions is notorious in SciOly for being unpredictable, not only in the content of questions but in placing as well. Generally, one can be "good" at Fermi Questions by knowing random facts and numbers (like the mass of the earth, distance of a light year, etc.), being familiar with factorials and logarithms, and knowing various physics constants (planck's, boltzmann's etc.). This is especially important since you cannot bring any materials (like cheatsheets or binders) to the event.

Most of the time, my partner and I ripped the test apart and worked individually on halves of the test, then reconvened on particularly difficult problems. A lot of the time, they disagreed, so they had to compromise.