Difference between revisions of "Arizona"

In the spring of 1982 Hugh Forshier, science teacher at Shadow Mountain High School of the Paradise Valley District with help of fellow teachers, Lois Blondeau and Dick Dutton conducted a Science Olympiad Contest utilizing the basic sciences – Biology, Chemistry, Physics and Mathematics. Awards of plaques and trophies were presented courtesy of the Arizona-Nevada Academy of Science.

In April of 2005 after the dissolution of the AZA the Arizona Science Olympiad Division C became an affiliated organization of the Arizona-Nevada Academy of Science.

This is a record of the past Arizona Science Olympiad State Champions. 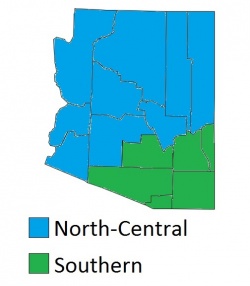 Arizona Division B Regional Tournaments for the 2017 season

As of the 2016 season, Arizona Division B teams must compete in Regional tournaments to advance to the state level.