Battery Buggy is a Division B vehicle event for the 2018 and 2019 seasons. It requires participants to design and build a moving, battery-powered vehicle capable of traveling a certain distance and stopping as close to the ending dot at that distance as possible. The device must meet several parameters regarding size, total power used, types of power used (power must be electrical), and safety restrictions. 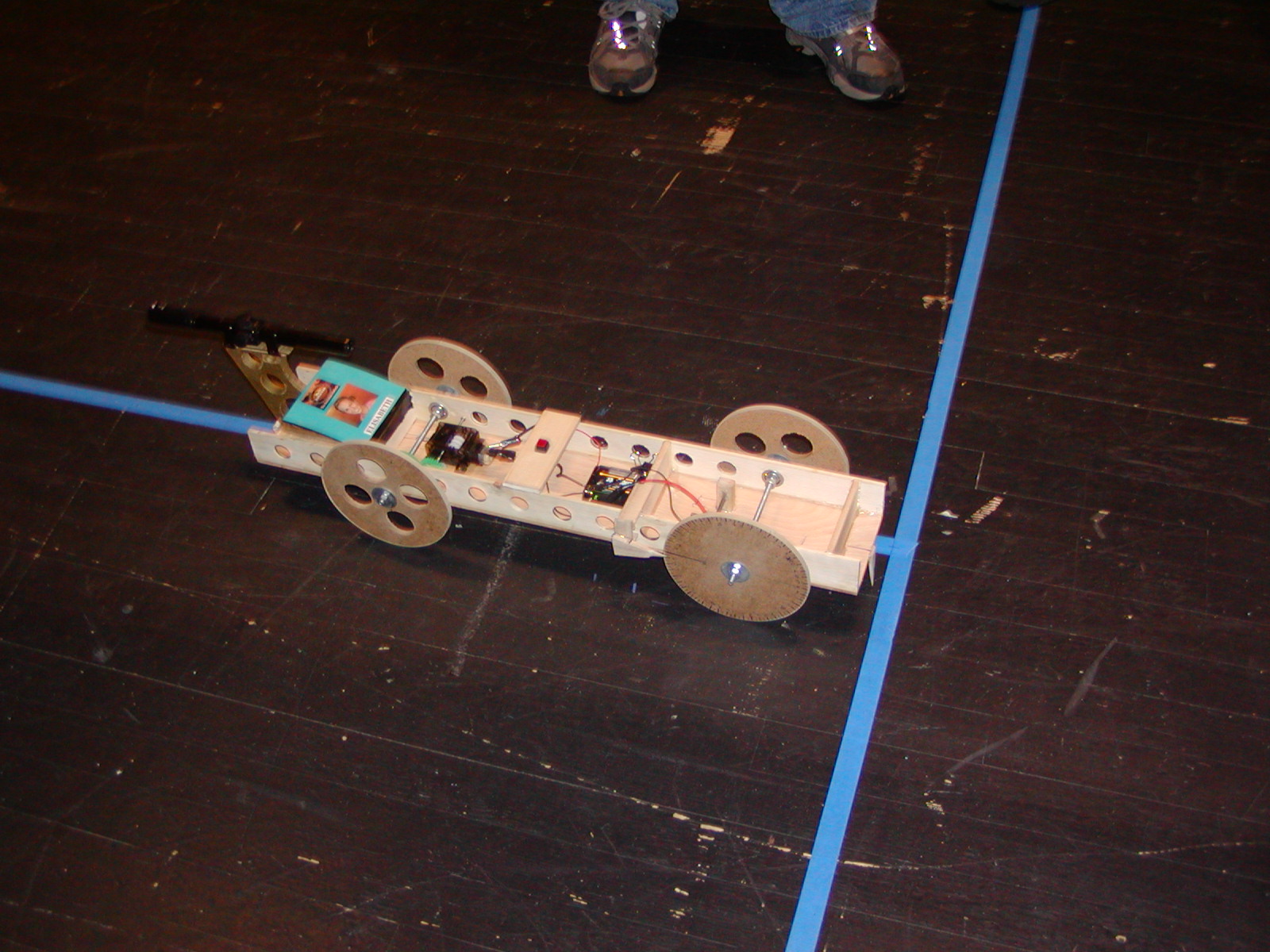 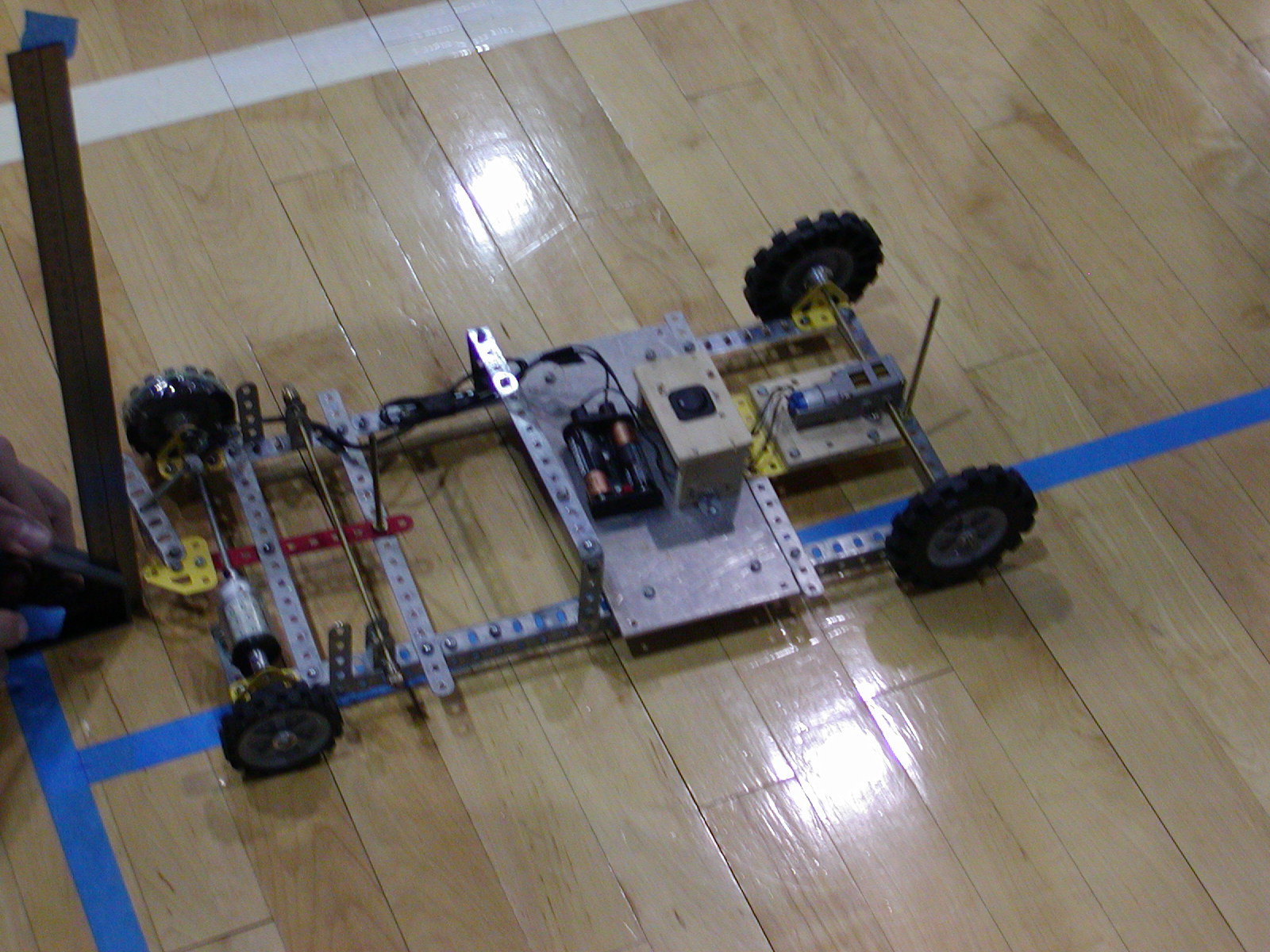 Chassis material is up to your own discretion (common choices are wood/plywood, plastic, or metal), but choose a rigid material that you can connect into a tight frame. Be cautious with thin pieces of wood due to warping, which could negatively affect the vehicle's trajectory, causing it to turn. Cars can be three- or four-wheeled, but four wheels are recommended.

Parts of a Buggy

The chassis is the main body of the vehicle, on which the wheels, braking system, and electrical components are mounted. A simple rectangle made of thick wood or plywood (available at most home repair stores) typically functions as a good chassis. Any material could be used, but it's best to use the lightest material feasible. It should also be easy to drill holes for mounting components.

The wheels collectively must fit within a 30 cm by 60 cm space of any height throughout the entire run. Axles and other parts of the vehicle may extend beyond these parameters. A larger diameter wheel revolves fewer times to make the buggy go the specified distance. To run bigger wheels you need a higher geared motor. Bigger wheels make the buggy go faster, but are heavier. Smaller wheels revolve more to travel the distance and should be geared lower. Smaller wheels are slower but lighter. Many people like to use CD's as wheels and put balloons over them for extra grip, which is easy and cost effective. Another option is using banebots wheels as they range in softness and size. Green wheels have been used successfully for buggies in the past.

Most commonly, people will use a threaded rod for their axle. This is one of the simplest solutions because it is easy to attach wheels and is used for the braking system. Threaded rods are found at most hardware stores.

Classic threaded axle/wing nut system. You have to go quite a ways to better this arrangement. As the axle turns, a wing nut travels along its length. As the wing nut nears one end of its travel, it contacts a switch and turns off the motor to stop the vehicle.

For 2019, a 1/4" or larger round wooden dowel is required to be used for measurement. The dowel should be the leading part of the buggy and should be placed at the front of the vehicle positioned approximately perpendicular to the floor, such that there is 1 cm or less between the bottom of the dowel and the floor. It should also be at least 20 cm long. The dowel attachment piece cannot extend more than 0.5 cm beyond the front of the dowel.

Adding the dowel to the existing buggy should not be difficult, but care must be taken to make sure that the dowel does not detach during runs; this would result in a Construction Violation, which results in significant penalties.

Battery Box/Holder: Selected to hold the size/number of batteries used. Battery holders can be as simple as a piece of wood with nails driven into it to hold the batteries in place and make contact with the terminals at each end. They are available from Radio Shack and others.

Batteries: Any size batteries can be used as long as they comply with the voltage and current requirements of the motor and the voltages specified in the rules. Larger batteries are heavier and require a sturdier chassis, stronger motor, more braking force. Normal dry cells (primary cells) can be fairly expensive over time. Rechargeable batteries (secondary cells) require a greater initial outlay, but can reduce costs significantly over time.

In 2018, teams are allowed to use 8, 1.5v batteries (AA). Batteries with lithium or lead weren't allowed but a rules clarification was made allowing NiMH and NiCad batteries. Some reasons to use NiMH batteries include:

A down side to using them is that they provide only 1.2 volts.

Switches: The vehicle circuit above uses separate start and stop switches. A common slide switch, located near the center of the chassis, is used to start the vehicle. This type of switch can require significant force to actuate and may cause the vehicle to move before it is actuated. It may pay to investigate other options that take less force. A lever switch (sometimes referred to as a micro switch) located near the wheel at one end of the threaded axle is used for the stop switch. As the wheels turn, the wing nut travels on the axle until it contacts the lever on the switch and depresses it to turn off the motor and stop the vehicle. Because of the way this switch is being used, it is useful to use a latching switch. These switches are available from Radio Shack and many other electronic/robotic suppliers. Make sure that the switch is also compliant with the rules.

Wires: Almost any electrical wire can be used. A common source is recycled 4-conductor telephone wire. It can be separated into individual wires by removing the outer cover. Solid wire (has only 1 large strand of wire inside) is stiffer and easier to work with, but breaks sooner when flexed. Stranded wire (has several thin strands of wire inside) is more difficult to work with, but doesn't break as easily when flexed.

Motor: Motors determine the voltage and current capacity needed from the batteries and must be mechanically compatible with the transmission/gearbox used. Motors are usually supplied as part of commercially available transmissions/gearboxes, such as Tamiya gearboxes. Another source for gearboxes/transmissions is old (or not so old) battery operated screwdrivers. The batteries may even be recycled if they are still good. The motor should be rated between 6-12 volts as the maximum battery voltage is 8 volts. This may be a good motor to start with.

(Note: You might be able to recycle the entire rear axle with transmission and wheels from an inexpensive Radio Control vehicle.)

Dynamic Braking (Regenerative Braking): Uses the drive motor as a dynamo (generator)to slow the vehicle. When the electrical current is turned off, the motor/vehicle begins to coast and acts as a generator. The force required to turn the generator is proportional to the current (not voltage!) generated. When the generator is connected to an open circuit (infinite resistance), no current flows and the force needed to keep the generator rotating is only that needed to overcome friction. If the generator output terminals are connected together with a low resistance connection (short) the current in the circuit increases, which in turn requires more force to turn the generator. This acts as a brake to slow the vehicle.

For the 2019 season it is optional to go for the "bonus", in which the vehicle has to pass through two cans at the center of the track. To have some way of turning, the easiest way is to make the back axle at an angle to the front and simply turn the device at the starting point. The angle should be adjustable. This can be done with either another threaded rod system.

Using a sighting device is not absolutely necessary, but it can help you make a more precise turn. Also, if you use the angled axle turning system, you need some way of making a straight line with the end dot to measure against.

There are multiple ways to brake a Battery Buggy. The easiest way is to use a basic wing nut brake, which is depicted in the image below.

This does not, however, remove power from the drive motor, which you want to do to prevent the motor from stalling as this can melt wires and burn up motors. To do that, you need to have the wingnut hit (and lock against) a momentary switch. If the motor is in a Normally Closed circuit (as it is in the diagram below), when the wingnut pressed the switch, the motor will be turned off. You can also wire the circuit by adding the wire that runs between NO and the (-) side of the motor so that it acts as an eddy current brake and resists further rotation. These measures should provide an immediate and effective braking system that can be reliably calibrated.

For more information on braking, see Scrambler#Brakes. Note that in the current rules, no part of the vehicle other than the wheels may contact the floor.

DISCLAIMER: Opinions and interpretations of rules on this site are NOT OFFICIAL! The only place for official rules changes and FAQ is SOINC.ORG.

The participants must place their buggy at the starting point and make sure the tip of their buggy's dowel is directly on the point. Then, they must announce to the judges that their run is about to commence, at which point they must activate the buggy with the eraser of an unsharpened #2 pencil. Teams aren't allowed to touch their buggy from that point on unless the judges allow them to do so. Also note that participants may not move past the starting line or "follow" their buggy. Timing begins when the dowel of the buggy passes the 0.5 meter mark and ends when it passes the 8.5 meter mark. After the buggy stops, judges then measure the distance from the front edge of the dowel to the starting point. Timing will be paused for all measurements. Participants will only be able to retrieve their buggies after measurements have finished and the judges have given permission. Two runs are given, with the score of the better run being used for ranking.

Scoring is calculated by adding together the time score, distance score, and center-line bonus. The time score is the buggy's time in seconds from the .5m line to the 8.5 m line. The distance score is the distance of the center of the dowel from the target point to the nearest millimeter multiplied by 2. The scoring for the bonus is -110 times 1/2 the distance between the closest points of the cans. Teams may opt out of the bonus, and a run that hits either of the cans is a failed run. The better of a teams two runs is used, and the low score wins. Negative scores are possible. Failure to impound a practice log will incur a 500 point penalty, and an incomplete log will receive a 250 point penalty. Neither an incomplete nor not impounded practice log will incur tiering of the buggy. Tier 1 is a run with no violations. Tier 2 is a run with any competition violations. Tier 3 is a run with any construction violations. Tier 4 is a vehicle not impounded during the impound period. Ties are broken first with the lower bonus distance, second with the lower distance score, third with the lower time score, and fourth with the lower score of the team's other run.

There are many ways of creating an adjustable system, including, but not limited to, through the use of a threaded rod/nut combination, the use of a limit switch, or simply charging rechargeable batteries to an ideal voltage. Innovation was slowing to a halt, however, so the event was removed in favor of Robo-Billiards back in the 2002-2003 season. Battery Buggy was finally brought back in the 2010 season.

In the 2011 season, the vehicle also had to maneuver around a bucket placed along the track.

Because of the many variables involved in running the car, much testing must be done to figure out exactly what to do, since theoretical calculations do not always match real life.