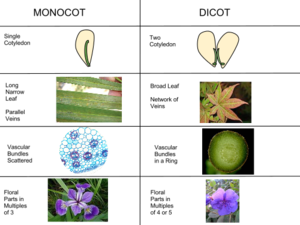 Plants need a variety of nutrients to survive. When the plant is running low on these nutrients, there are telltale signs that to look for to determine what’s wrong. Some of the most important nutrients to plant growth are nitrogen, phosphorus, and potassium. On fertilizers, you often see the N-P-K ratio of the fertilizer, the concentration of nitrogen, phosphorus, and potassium. There are 2 types of nutrients: mobile and immobile nutrients. Mobile nutrients are able to move through the plant from the younger leaves to the older leaves when needed. This makes most of the early symptoms of theses deficiencies occur in the older leaves. Examples of mobile nutrients include nitrogen, magnesium, and molybdenum. Immobile nutrients are not able to move through the plant, and therefore occur first in the younger leaves. Example of immobile nutrients are calcium, boron, and iron. Zinc is a notable exception, since it can move, just not far. Therefore, zinc deficiencies show symptoms in the middle leaves of the plant.

Nitrogen - Nitrogen is one of, if not the most important element to a plant’s growth. It is used in many important organic molecules, such as nucleic acids, proteins, amino acids, and chlorophyll. Symptoms of a nitrogen deficiency include loss of coloration, called chlorosis, in mature leaves and necrosis, or the death of many or all cells in a tissue. The leaves also start to turn yellow, and the stem of the plant usually turns to a light green color.

Phosphorus – Phosphorus is another very important plant nutrient, used in organic molecules such as nucleic acids and ATP. Symptoms of a phosphorus deficiency are leaf tips with reddish-purple “flames” coming from the tips, and older leaves turning dark green or reddish purple.

A picture of a corn plant with a phosphorus deficiency

Potassium - Potassium is used in plants to activate enzymes and in photosynthesis. Signs of a deficiency include older leaves wilting and looking scorched. The leaves also start yellowing on the sides and go along the edge of the leaf, leaving the interior untouched.

Calcium - Calcium is used in the construction and material of the cell wall. Symptoms of a calcium deficiency include new leaves growing shriveled and darken. The tips of leaves will also often become brittle and eventually die.

Magnesium - Magnesium is an important plant nutrient, since it is used as the center molecule in chlorophyll and an important molecule in ATP synthesis. Symptoms of a magnesium deficiency include older leaves yellowing at the edge, leaving the center of the leaf green.

Sulfur – Sulfur is an important plant nutrient used in the amino acids cysteine and methionine. Symptoms of a sulfur deficiency include yellowing of young leaves, and eventually yellowing of older leaves.

Boron - Boron is a plant nutrient used in cell wall formation and reproductive tissue. Symptoms of a boron deficiency include the death of the terminal (or apical) bud, the primary point of growth in plants. Young leaves may also show chlorosis, and other leaves may develop dark brown spots that progress to the death of that tissue.

Copper - Copper is a nutrient needed for chlorophyll production and respiration. Symptoms of a sulfur deficiency include leaves darkening and growth stopping. Symptoms can also include delayed maturity and melanosis, or brown discoloration.

Iron - Iron is an important nutrient used in plant respiratory and photosynthetic reactions. Symptoms of an iron deficiency include chlorosis between the veins of the plants, and eventually chlorosis of the whole leaf. The veins of the plant appear very sharply defined next to the yellowing leaves.

Manganese - Manganese is a plant nutrient important for the chloroplast. Symptoms of a manganese deficiency include yellowing of the leaves between veins, dead spots on the leaves, smaller plant parts, and fronds having slowed or stopped growth (called frizzle top).

Molybdenum - Molybdenum is needed for enzyme activation and nitrogen fixation in some plants. Molybdenum deficiencies often have similar symptoms to a nitrogen deficiency, due to how it is used.

Zinc - Zinc is a plant nutrient used in the production of plant growth factors (or plant hormones). Symptoms of a zinc deficiency include yellowing of leaves between veins and sever chlorosis, turning the leaves to a pale green color, or even white if the deficiency is bad enough.