There are three main types of matter that we encounter frequently in our everyday lives: solids, liquids, and gases. Solids have definite shape and volume, liquids have indefinite shape but definite volume, and gases have neither. What makes gases unique is that gases are compressible due to the large spaces in between the particles. As you compress the gas, the particles go closer to each other, decreasing the volume.

Gases can be conceptually described by the Kinetic Molecular Theory. The theory states that

Some of these assumptions aren't necessarily true in real life; for example, gas particles have volume, and there will be intermolecular forces in an actual gas sample. However, we adopt these principles to make the calculations easier. By using the kinetic molecular theory, we can mathematically describe gases in simple, algebraic equations. A gas that follows the Kinetic Molecular Theory is described to be ideal.

These equations most commonly use the following variables:

Avogadro's Law, also known as Avogadro's hypothesis or Avogadro's principle, says equal volumes of all gases, at the same temperature and pressure, have the same number of moles. In particular, the volume of a gas is proportional to the number of moles, which can be written as:

Where V is the volume of the gas and n is the amount of the gas in moles.

Since we assume that the volume of the particles themselves is very small and can be assumed to be zero, it doesn't matter how large the particles are. At the same temperature and pressure, a mole of oxygen gas (O2) and a mole of carbon dioxide (CO2) have the same volume. At STP (standard temperature and pressure; that is, 1 atm and 273 K), one mole of a gas will take up 22.4 liters, no matter what.

Boyle's law states that the pressure of a gas increases as the volume of its container decreases, which can be written as:

Note that pressure is force applied over the specified area. For example, if you stood on tip-toes, your weight (9.81 times your mass) will be distributed over the very small surface area of your toes, meaning that you're exerting more pressure. If you stood on your feet, your weight will stay constant but the pressure will decrease due to the increase in surface area.

Boyle's Law is an inverse relationship; that is, the volume of a gas increases as the pressure decreases. For example, if you apply a lot of pressure on a balloon, it should compress, thus decreasing the volume. Think about these laws in real-life scenarios, and you should be able to understand the equations without much memorization.

Charles' law states that a temperature increase in gas causes it to expand, which can be written as:

where V is the volume of the gas and T is the temperature of the gas.

Gay Lussac's Law states that as the temperature increases, the pressure should increase also if the volume stays constant.

Again, think this conceptually. If you put a balloon on a hot stove and held it so that it could not expand, you will feel it pushing harder on your fingers due to the increased molecular motion.

The above equations may seem intimidating at first. However, it is not crucial that you memorize the formulas and their names. Instead, memorize the combined gas law, which essentially "combines" the above laws into one, hence the name.

We normally use this equation for problems involving two states. For example, a gas sample at 760 mm Hg and 30 L has its pressure increased to 1000 mm Hg. What's the resulting pressure? There are two states in this problem: the initial conditions (760 mmHg, 30L) and the final conditions (1000 mmHg, unknown pressure). Any variables not used (temperature) can be discarded in your calculations.

The Ideal Gas Law states that gases that follow the Kinetic-Molecular Theory (and thus act ideal) can be mathematically described as:

This is very similar to the Combined Gas Law; however, use it when the problem only asks about one state and/or asks about moles. For example, a gas is at 300 K, 760 mmHg, and has a volume of 20L. How many moles of gas are there? There is only one set of conditions: 300K, 760 mmHg, and 20L, so we can put those values into the equation and obtain the number of moles. The R represents the gas constant, which is the same at all pressures and temperatures.

Keep in mind that the only unit that changes between these gas constants is the pressure. Make sure all of the volumes, temperatures, and moles are in their respective units before plugging it into the formula.

Dalton's Law, also known as Dalton's Law of Partial Pressures, states that in a mixsture of non-reacting gases, the total pressure exerted is equal to the sum of the partial pressures of the individual gases. This can be expressed in mathematical terms as:

This law is due to the lack of intermolecular forces between the particles. If there are no attractive nor repulsive forces between molecules, then each particle acts independently, no matter its composition. You can also use the mole fraction, or the ratio between the moles of one of the gases over the moles of the whole gas mixture, to calculate the pressure of one of the gases. Mole fractions are represented by a lower-case chi, or χ.

The mole fraction can be calculated by this formula: 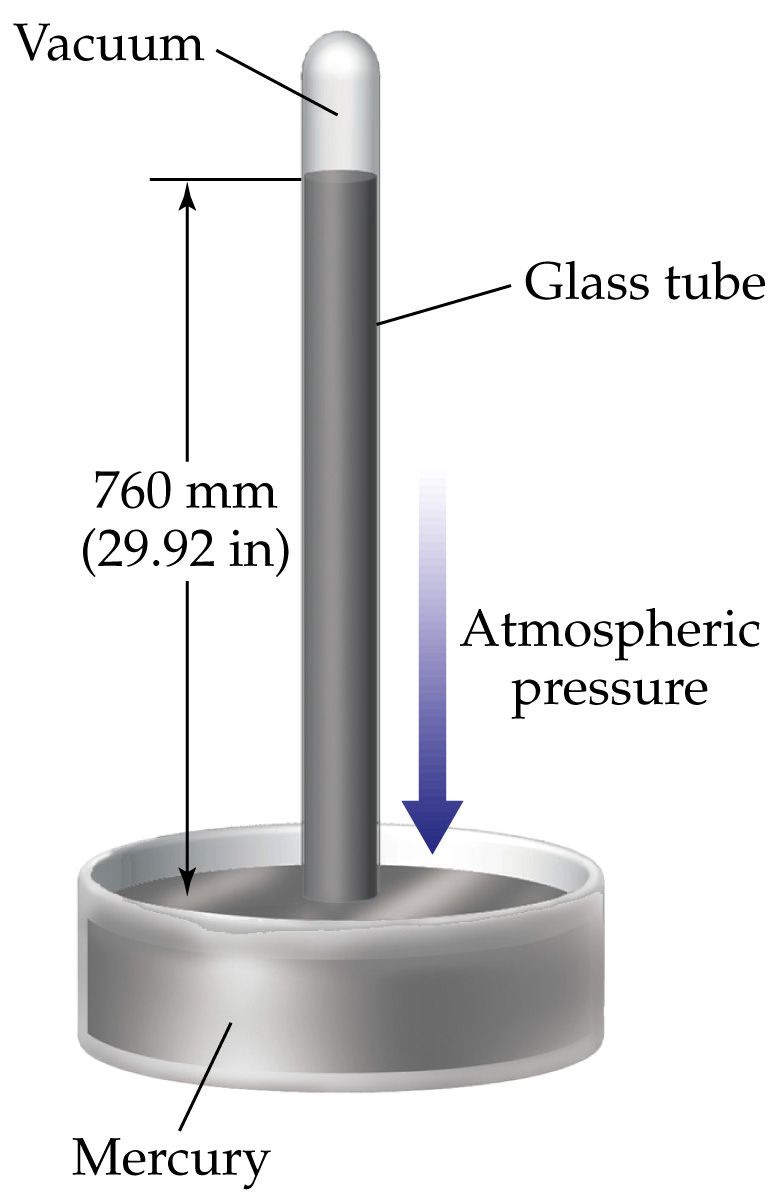 Examples of the three types of manometers.

The Maxwell-Boltzmann distributions at different temperatures.

Since the kinetic molecular theory states that the temperature of a gas sample is proportional to the average kinetic energy, the equation [math]KE_{avg} = \frac{3RT}{2}[/math] demonstrates the relationship mathematically. In addition, the root-mean-square speed, or the square root of the average of the squared velocities, describes the average speed of the gas particles.

This equation is derived from combining the kinetic energy/temperature formula with the definition of kinetic energy ([math]KE_{avg} = \frac {1}{2}mv_{rms}^2[/math]).

The mean free path is the average distance that a gas particle will move between collisions. As the pressure of the gas decreases, there should be fewer gas particles per unit of volume, causing the mean free path to increase. As these particles move and collide with each other, the gas as a whole should take up the entirety of the container through the process of diffusion, or a net movement from areas of high pressure to low pressure. A similar process is effusion, where a gas in a container moves through a tiny hole into a vacuum. In both cases, gases move from high pressure to low pressure (or a vacuum).