Periodicity, the repetition of patterns at regular intervals, is the most important property of the Periodic Table. In the Periodic Table, pure elements are ordered in increasing order of atomic number, which is the number of protons in nucleus. Other important factors in determining the arrangement of the elements include electron configurations and recurring chemical and physical properties. These periodic trends may increase, decrease, or stay consistent along a row or column. The periodic table also contains four rectangular blocks with approximately similar properties. Metals tend to be found more towards the left of the table while nonmetals tend to be found on the right, with metalloids in between, following a "staircase" pattern. 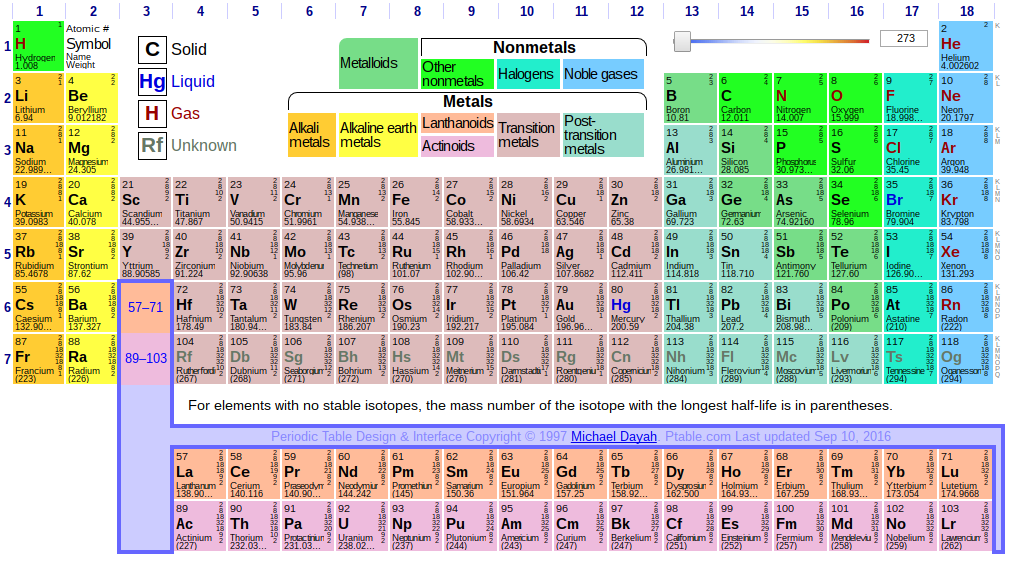 The first widely-accepted arrangement of the elements was created by the Russian chemistry professor Dimitri Mendeleev in 1869. Previous efforts to order the elements had been attempted, but none had proven to be very successful. Mendeleev's table grouped the elements into eight columns, rather than the now-conventional 18 column arrangement, in increasing order of atomic mass instead of atomic number. Elements with similar chemical properties were grouped into families, while Mendeleev boldly left spaces blank for predicted elements yet to be discovered. Several of his predictions, for scandium (Sc, 21), gallium (Ga, 31), germanium (Ge, 32), technetium (Tc, 43), and protactinium (Pa, 91), accurately described the chemical properties of these undiscovered elements.

The Periodic Table is arranged by rows, also known as periods, and columns, which are also known as groups. Periods are arranged by atomic number while groups are ordered by similar chemical properties. For example, the alkali metal group, which contain sodium and potassium, are all shiny, soft, highly reactive, and have one valence electron in their outermost s-orbital.

Groups are ordered from 1 to 18 (New IUPAC numbering). Elements in the same group usually have similar chemical properties.

Some groups have names, which are dependent on chemical properties.

There are also several blocks of elements that have special names. 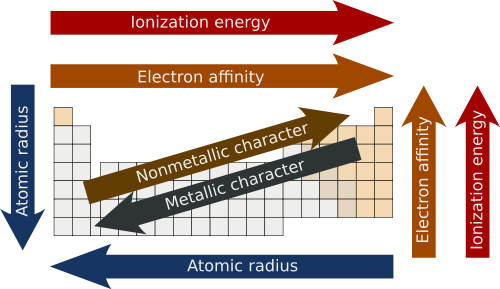 Some examples of Periodic Trends

The location of an element on the Periodic Table governs the element’s bonding behaviors. For example, sodium (Na, 23) is an alkali metal, so it prefers to give away its outermost electron and form salts, while neon (Ne, 10), being a noble gas, refuses to bond due to its full outer shell.

An ionic bond is a chemical bond where one ion loses one or more electrons and transfers them to another ion. These are generally seen in metal-nonmetal combinations, such as sodium chloride (NaCl), in which an electron is transferred from the sodium atom to the chlorine atom.

A covalent bond is a chemical bond where one or more electrons from one element leave that element and fill the outermost electron shell of the other element. In most simple cases, this results in both elements having full outer shells of electrons. These are usually seen in nonmetal-nonmetal bonds, such as in water (H2O), in which the electrons are shared between the hydrogen atoms and the oxygen atom.

Other Types of Bonding

When two or more metals form a compound, the resulting bond is known as a metallic bond. It is the metallic equivalent of a covalent bond.