Difference between revisions of "Codebusters"

Code Busters is an event in Division C for the 2019 season and was held as trial event at both the 2016 National Tournament and the 2018 National Tournament. In this event, up to 3 participants must decode encrypted messages, or they may be required to encode messages with certain advanced ciphers. Competitors are not allowed to bring any resources to this event, but can bring a 4 or 5 function calculator - no scientific or graphing calculators allowed.

The very first cryptogram is timed - when solved, a team member should raise their hand/shout "bingo!"/etc to alert the supervisor. The first question will be an Aristocrat with or without a hint. Teams will receive bonus points depending on their time, but they may make as many attempts as they want to break the code without any penalties. The first cryptogram may also be used as a tiebreaker. The timing bonus will be calculated from the start of the event until the question is answered successfully, or until 10 minutes have elapsed. Teams may still answer the question after 10 minutes; however, the timing bonus is 0. The time bonus for the first question is 4*(600-number of seconds taken). Solutions are given full points only if the solution is an exact match or differs by only one or two letters. Each additional error after the first 2 will result in a deduction of 100 points. These deductions will not exceed the value of question (can not go below 0). Questions with answers as numbers, the answer is either correct or incorrect (no partial points).

One example of a mono-alphabetic substitution is Caesar shift cipher, where each letter is replaced by one shifted by a certain amount. For example, the following table has each letter shifted three positions to the right.

From this table, it is clear that each shifted letter is the same as the original letter three spaces from it (A becomes D, B becomes E, etc). Thus, a message like "Science Olympiad is cool" would become "Vflhqfh Robpsldg lv frro" using a Caesar shift of 3. The alphabet can be shifted any number of times. This type of cryptogram can be solved through brute force, by taking a section of the message and writing out all 26 possible shifts below it, upon which the message is easily revealed. For example, try to decode "xhntqd". First, write out the ciphertext. Then, write out the possible shifts below it.

After shifting "xhntqd" five times, the plaintext is revealed to be "scioly", and no further shifts need to be tested.

Table of letter frequency in English.

This may be the most common way to solve a cipher on a Code Busters test, because the supervisor may not write that a Caesar cipher etc. was used to encrypt.

First, find the corresponding letter for a few cipher letter by:

Two clues may give different substitution, in which case experimenting may be helpful.

Then, substitute the known letters, and gradually decode more words using the word fragments. Starting with two or three-letter words are often easier, because of the limited possibilities.

Messages with Spaces and a Hint

These cryptograms are similar to those published in 20th century newspapers. These are usually solved using patterns, as described above, with the hint providing additional information to assist the decryption.

These cryptograms are similar to NSA and diplomatic messages, and do not have a hint. These are usually solved using patterns, as described above.

Messages with Spaces and Spelling Errors

These cryptograms are similar to FBI and organized crime messages. These are often solved by patterns, with additional care:

These cryptograms are similar to NSA and espionage messages, and have a hint. An example is: "UVYNYGUSZYSBZBULAPIAZUACAZZAMLGFALPERAJZNYGUUAFBR". Students are told that the last word is TODAY, and the cipher begins with a three-letter word, followed by a four-letter word.

Messages without Spaces or Hints

These cryptograms are extremely difficult and may not be tested very frequently. In the event that a test does contain one, the best method is using the patterns listed above, especially finding repeated three letter "phrases" or double letters.

At the invitational/Regional level, one cryptogram may be in Spanish as a challenge. At the state level, there will be at least one. It may be helpful if one of the partners is fluent in or has a few years of knowledge in Spanish.

For Spanish cryptograms, n and ñ are treated as different letters. However, letters with accents are treated the same as without (a and á are the same). This means that, when working with cryptograms, accent marks do not factor in. Also, ch, ll, and rr are NOT considered distinct letters. Thus, "churro" would have 6 letters: c-h-u-r-r-o. The Spanish alphabet used for cryptograms is as follows:

The frequency table of Spanish letters is as follows, from most to least frequent:

Spanish cryptograms are often solved with patterns as well, with a few differences:

The encryption formula for an Affine cipher is:

The encrypted message is IMRAZOWFANW.

To decrypt the message given the key, use the decryption formula:

Decrypting then becomes a task of plugging into the formula.

Sometimes, some characters are given, which makes decryption much easier. For example, one might be given the ciphertext "CXWZ ZRC OWGW" and told that the first word is "EDIT". Thus, the characters are mapped as:

Write out two equations using the first two values and the equation [math]Output=ax+b \bmod 26[/math] in order to solve for [math]b[/math].

Cancel out the [math]a[/math] by multiplying to get the same value (same process as solving a system of equations).

Take the mod of the right side.

Compute the modulus values to see which works. In this case, 8 works. Now, substitute [math]b[/math] into the equation and repeat the process.

However, observing the mirror like alphabet yields a much simpler equation of:

Since the alphabet is like a mirror, encryption is the same as decryption.

NOTE: These cryptograms will be matrix based, and only use 2x2 or 3x3 matrices.

The alphabet for the Hill cipher has corresponding numbers as follows:

Begin by picking a key matrix of either 2x2 or 3x3. These could be a 4 letter word or three 3 letter words. For this example, the key will be WIKI (2x2 matrix). Then, break the message into groups of two. This example will use the message SCIENCE OLYMPIAD, which would be split up into SC IE NC EO LY MP IA DZ. Notice that a Z is added in order to make the last group a group of two. Write the message and the key as matrices.

In the second step of the above equation, the matrices are multiplied. Although it may seem complicated, matrix multiplication is fairly straightforward.

Just like in a 2x2 matrix, the row of the first matrix is multiplied by the column of the second matrix, giving the following product.

The "mod" operation is also fairly straightforward. Essentially, it finds the remainder after dividing. For example, [math]153 \bmod 26 [/math] is equal to the remainder of [math]153 / 26[/math], which is 23. On a scientific calculator, this is found by dividing the two numbers, subtracting the integer value from the answer, and multiplying the decimals by the number after "mod" (in this case, 26). Therefore, the process would be:

The rest of the encoding of the message is shown below.

The encoded message is WOAIQQSWSQUGUCSW.

3x3 matrix encryption works in the same way. This example will encrypt "EDIT THE WIKI" using the key "BEE FLY BUG". First, split up the plaintext into groups of three, which becomes EDI TTH EWI KIZ. Once again, the last group has a Z added to make it a group of three.

The encoded message is WLITEZUMYMKI.

The Vigenère cipher, invented by Blaise de Vigenère in the 16th century, is a polyalphabetic cipher. This means that each letter is shifted by a different amount. According to the rules, students will probably be asked to encrypt rather than decrypt Vigenère ciphers. Encrypting is a fairly straightforward procedure.

First, write out the message with the key under it, repeating the key as many times as necessary. An example is shown.

Then, take out the alphabet square, as shown below. This will typically be provided on the test. 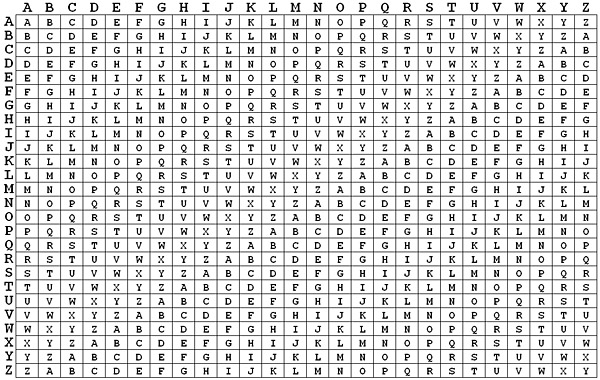 Using the alphabet square, encode the plaintext. The first message letter is S and the first key letter is S, therefore, look at the table to see where row S and column S intersect. It is clear that they intersect at K, so write down K as the first letter of the ciphertext. Repeat this with the rest of the message. Thus, the encrypted text is "KEQSYAW QTMXNACL WD AGQT"

If the key and ciphertext are both given, decoding is also possible. This is done by taking a letter of the key and finding its row, finding the corresponding letter of ciphertext in that row, and seeing what column that letter falls in. The letter in the column is the letter of the plaintext. In the previous example, the first letter is decoded by going to row S and finding K, which is located in column S. Thus, the plaintext letter is S.

Tables are typically given on the test, but in the event they are not, the following strategy may be more helpful.

Remember or recreate the correspondence between letter and number like in Affine and Hill Cipher, with A being 0 and Z being 25. Then, for each letter, convert the plain text and key to a sequence of numbers, and add the numbers modulo 26. Then, convert the number back to letter.

For example, if we encode the message "SCIENCEOLYMPIADISCOOL" using the key SCIOLY, we get

To decode a message using this method, subtract instead of add the key's corresponding number: The cipher text K with the corresponding key letter S gives plain text [math]10-18=-8\equiv18\pmod{26}\to \text{S}[/math].

The Baconian cipher replaces each letter of the plaintext with a 5 letter combination of 'A' or 'B'. This replacement is a binary form of encoding, in which 'A' may be considered as 0 and 'B' as 1. One variant of the Baconian Cipher uses a 24 letter alphabet with the letters 'I' and 'J' having the same code, as well as 'U' and 'V'.

Another variant of this cipher uses a unique code for each letter (26 letter alphabet).

While not explicitly stated in the rules, the Dancing Men cipher has appeared in previous tests and possibly may appear as a bonus question in future tests. The Dancing Men cipher is a monoalphabetic substitution cipher with spaces where each letter is represented by a dancing man. A man holding a flag indicates the end of a word. In the story, messages encrypted with this cipher were sent to a woman named Elsie, Sherlock Holmes solved the cipher using that E is the most common letter, and that Elsie's name would likely appear. Since the cipher may be easily decrypted if all the dancing men are memorized, there are a few patterns to help remember them. O and A, R and I, and T and E are flipped. T and E are symmetrical about a vertical axis. N and S have the same legs and right arm. The substitution chart is found below. 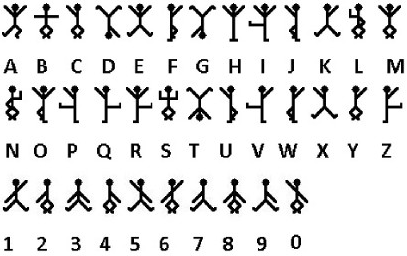 An example of the Dancing Men cipher is listed below.

contains the message "NOTARIES", which conveniently shows the patterns listed above.

The amount of points each question is worth will be distributed by the following:

In the case of a tie, select questions predetermined by the event supervisor will serve as a tiebreaker. The tie is broken using the following criteria in this order: score, degree of correctness, and number attempted.