The Hydrologic Cycle, more commonly known as the Water Cycle, is an important part of any water-related event, such as Awesome Aquifers, Dynamic Planet/Earth's Fresh Water, Hydrogeology, and Water Quality.

There is a common steady cycle of water throughout the Earth. The best way to understand this is to follow the image below. 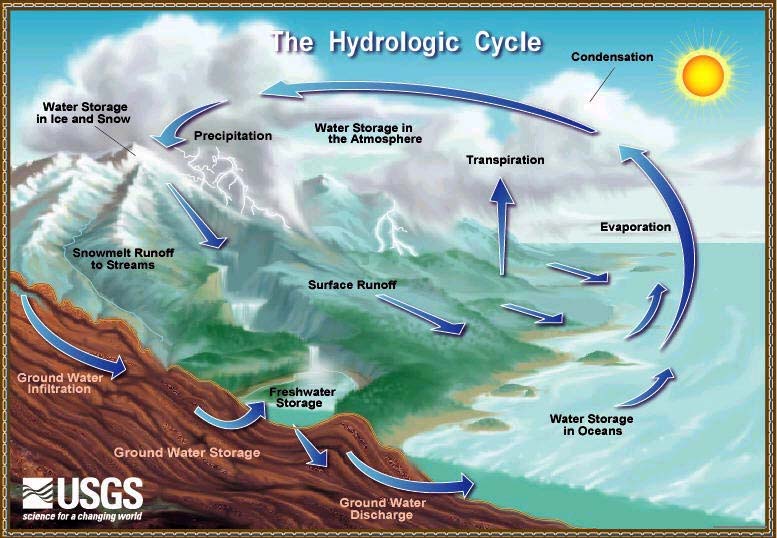 The hydrologic cycle, better known as the water cycle, describes the movement of water through the hydrosphere. The easiest place to begin is with evaporation. As the sun heats up the Earth's surface, water evaporates, meaning it changes from a liquid to a gas and enters the air. Another important way that water vapor can enter the atmosphere is through transpiration, which is the loss of water from parts of plants, mainly their leaves. Also, there is sublimation, which is the process of a solid, such as ice, going directly into the gas state, such as water vapor. Once water vapor is in the atmosphere it goes through the process of condensation, where it returns to a liquid state and forms clouds. When the water droplets in the clouds become large enough they will begin to fall to the ground as precipitation. Then, when the precipitation reaches the ground some of the water will become run-off and flow to a river or other body of water. Also, some water will infiltrate the ground and become groundwater, where it can replenish aquifers. Eventually, the water will again evaporate and the cycle will continue.

Evaporation is the process in which liquid water is changed into water vapor. This is what returns the water in the water cycle to an atmospheric state, and is thus a driving horse in the cycle. More information about evaporation can be found here.

In order to calculate the water budget for a watershed, sum the total input and subtract the total output.

Understanding what forms of water are found on Earth is also important, as well as what proportion of Earth's water is found in that form (e.g. in lakes, oceans, clouds, ice). The diagrams below give insight into these figures.