In this event your team must prepare and bring materials to build a device on site to complete a task.

2. Coin Sorter - teams must build a device that is able to sort out five dollars worth of mixed change. The coins must all go into different storage places according to their value. These must be marked and you must be able to get the coins out so they can be scored. You have a minute to sort as many coin as you can using your device. There is a mystery material that must be used. Construction time will be between 30-45 minutes.

For the 2010 event, you must build a device that will use a standard unmodified golf ball to trip 4 mousetraps, within one minute. In a specified order (North, South, West, East) will get you bonus points. All the materials must fit into a box at most 40x40x60cm.

You may not bring glue or power tools to the event. You may preassemble some parts as long as they fit into the 40x40x60cm box, you have 30 minutes to assemble the device on site. You must drop the golf ball into the device at the central point.

You may use up to 6V of electricity to power your device in each circuit to add on to its accuracy.

You may not touch the device after it begins operating unless you want to lose points, you also may not secure the mousetrap directly to the floor. The mousetrap or any part of the device may not become an unshielded projectile at any point.

The first thing to do when designing your contraption is to decide how to set off your mousetraps.

In this design, each mousetrap directly sets off the next, such as tying a string from the bar of one mousetrap to the trigger of the next. Once one mousetrap goes off, the rest go off in a fairly short amount of time. Sometimes it can be hard to distinguish one trap tripping from another, so they all appear to go off at once.

In this design, each mousetrap starts a series of events to set off the next, such as a mousetrap releasing a ball to roll down a ramp to the next mousetrap. This is a fairly popular design technique, but if one mousetraps fails it can be hard to get your contraption working again mid-competition.

In this design, each mousetrap has nothing to do with the next mousetrap, such as each ball rolling down a separate ramp. If one mousetrap doesn't go off, the next will.

How to get the Most Points

Lets break down how to get the most points possible:

The first two are gimmies. If you don't get those, drop out right now.

The fourth, once again, if you don't get it, drop out of Junkyard Challenge.

The next one is more difficult than the others: if all the moustraps don't go off without direct touches then you won't get this one. In the rules it say that any mosetrap that go off "as the result of a direct touch" won' get scored. That penalty also includes not getting those points.

If you get those points, then you will also get 140 pts for all 4 mousetraps going off (35 pts per mousetrap).

As long as you have a system to delay the trigger of each mousetrap, you should get all 225 pts for the mousetraps going off in the right order. This is a lot of points, so its worth it to make a timer to get these points. What confuses most people is that they usually think "North South East West" or "North East South West", so pay attention to the order that you set them to go off. Independant triggering or indirect triggering may get you these points, but direct triggering will not (see above). Take this into account while designing your contraption.

As long as you have some form of delay, you can get the 42 points for lasting 5 secs. The 2 pts per second may not seem like much, but if you do it right, you can get 120 pts out of it, which can make the difference between first and last.

You can find an easy-to-use JYC score sheet here. Just type in Y/N and it'll do the rest!

As mentioned above, you should really design a system to delay the mousetraps going off. Here are a few ideas:

Water behaves in a pretty predicable way. You can use this to your advantage. You can start all of these "water timers" by building a simple sea-saw type item, attatch a bottle of water to one end and drop the golf ball at the other to pour the water into a cup.

Simple: Cut a small hole into a cup to let the water pour out slowly. You can put another cup, attatched to say, a pulley, underneith that the water can drain into. Experiment with different size holes and drip speed to find the perfect hole size/water volume ratio.

This is a pretty nifty trick: by cutting a hole in a cup and placing a bendy straw into your cup, you can create a timer that starts only once the necassary amount of water gets placed into the cup. Look at the following models: 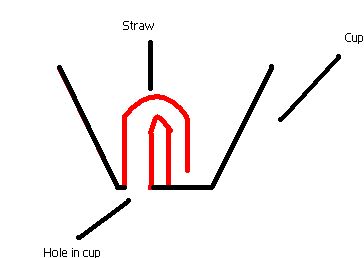 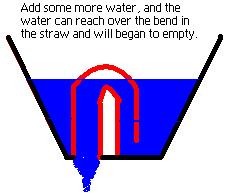 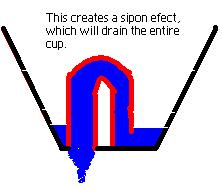 In this way you can do two things at once:

Small inclines that you can rool marbles, golf balls, ect. down can make a greate timer. Roll a marble down a long ramp with a small incline to a mousetrap. As long as you keep the same incline, this can be a very reliable way to time your contraption.

This is a very reliable method, as long as you keep fresh batteries. Just attatch a motor to say, a piece of string, and the string will slowly get tenser. If you have multiple pieces of string, each a different length, then each string will pull the trigger on a mousetrap when it loses all of its slack. Just watch out to make sure nowhere on the circut does the voltage exceed 6 volts. String, however, is not the only way to do this. Integrated ciruits can do the same thing with much more accuracy.

Both of these pictures show how to wire the NXT and the RCX to use less then 6 volts, the maximum allowed. For the RCX, when standing straight up, you need to put aligator clips in the upper left and the bottom right. For the NXT (bad picture, I know...) you need to put the wires at the bottom right when standing straight up. They both go on the right, one at the very bottom, and one right above the first. The NXT and RCX can be good ways to controll your device, but remember that they are running on less then they are designed to, so you run the risk of them dying in the middle of a competition (NOT GOOD!).

There are a couple more things you can do to set off mousetraps.

TRAP 2: When mousetrap #2 is set off it has a string attached to its killbar. The string is wrapped around a screwdriver on an axle. When trap 1 snaps it unwraps the string, freeing the screwdriver to fall on trap #2.

TRAP 3: When trap #2 is set off, it triggers a PVC tube to fall on a line of dominos which lead to the mousetrap's trigger.

TRAP 4: The triggering of trap #3 releases a marble to roll down a ramp onto another switch. When the switch is turned on, it repeats the method of setting off trap #1.