Difference between revisions of "Remote Sensing"

"Participants will use remote sensing imagery, science and mathematical process skills to complete tasks related to an understanding of the causes and consequences of human interaction with forest biomes." - Remote Sensing rules 2010

Like 2009, 5 double sided sheets of paper are permitted, as well as a non-graphing calculator.

This year, the tests tend to comprise of a mix of image interpretation as well as questions regarding concepts of remote sensing and forest biome biology knowledge. Some ecology/biology background is useful. Knowledge of individual space programs and NASA satellites, in addition to the types of sensors used, is useful.

Image interpretation and analysis is a huge part of the Remote Sensing event. It involves locating, identifying or measuring certain objects in images acquired using Remote Sensing. This isn't as straightforward as it may seem. There are plenty of features that can throw you off in each image. However, some features are the same in each image as well. There will always be a "target" to look for, which will always contrast with other parts of the image- making it "distinguishable". All images in the Remote Sensing event will be in analog format- photograph form- rather than digital.

According to the Canada Centre for Remote Sensing, whose tutorial you can find in the external links section, there are several things to look for to assist in image interpretation. These are tone, shape, size, pattern, texture, shadow, and association.

Projecting color-filtered black and white images through certain filters can yield color composites. The images you'll be dealing with in this event will most likely be composites.

To begin understanding composites, we must first understand how they are made. First, work with three black and white transparencies of the same image. Each represents a different spectral band - blue, green, and red. Shine white light through each one onto a screen. Then, project each band through a filter of the same color- blue band through a blue filter, green through a green, red through a red. Because the blue images are clear on the blue spectral band image, they'll appear blue on the composite. If you line up the three images, you'll have the natural color (or very close) of the image. You've just made a color composite. This process is called "color additive viewing."

Not all composites have to have natural colors. What would happen if you projected the red band through a green filter? Or the green band through a blue filter? If you have an infrared band as one of the transparencies and shine it through the red filter, you can make something called a "False Color (IR) Composite." You may have seen false color composites in competition. Often, they are used to show healthy vegetation compared to vegetation poor in health. They may appear the same naturally, but false color displays healthy vegetation in a much brighter tone. For example, false color composites may show a football field made up of healthy grass as a strong red color, but a football field composed of Astroturf or other artificial substances will show up as a duller red.

It's important to understand what bands correspond to what wavelengths for satellites. This link: http://geo.arc.nasa.gov/sge/health/sensor/cfsensor.html, is the best source for all of the bands of the major satellites. Another link, http://www.physicalgeography.net/fundamentals/2e.html, is good for a very brief overview of the topic of remote sensing.

Energy can be emitted, transmitted, absorbed or reflected in waves when it hits a surface. This is important to remote sensing because that's how sensors detect certain data about the objects a satellite is studying. Active sensors emit radiation toward an object and measure its reflectance. Passive sensors simply use the energy already being radiated from objects without emitting any of their own.

Their are several types of energy that can be emitted, depending on their wavelength: 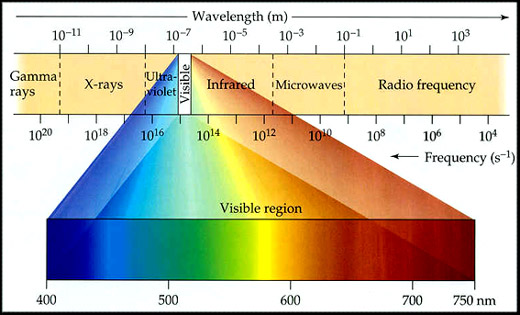 It's important to know which types of energy are useful for what.

Gamma rays and x-rays cannot be used for remote sensing because they are absorbed by the Earth's atmosphere: in general, the shorter the wavelength (and the greater the frequency), the more absorption occurs.

Ultraviolet radiation is not useful either because it is blocked by the ozone layer.

Microwaves are used in radar (see more in Sensors section)

During the competition, you may be asked to analyze a picture's NDVI values. NDVI stands for "Normalized Difference Vegetation Index" and is used to describe various land types, usually to determine whether or not the image contains vegetation. The equation provided by USGS for NDVI is as follows:

Channel 1 is in the red light part of the electromagnetic spectrum. In this region, the chlorophyll absorbs much of the incoming sunlight. Channel 2 is in the Near Infrared part of the spectrum, where the plant's mesophyll leaf structure can cause reflectance. You may also see the equation given like so:

(Where NIR is Near Infrared and VIS is Visual (Red) Light)

Generally, areas rich in vegetation will have higher positive values. Soil tends to cause NDVI values somewhat lower than vegetation, small positive amounts. Bodies of water, such as lakes or oceans, will have even lower positive (or, in some cases, high negative) values.

There are some factors that may affect NDVI values. Atmospheric conditions can have an affect on NDVI, as well as the water content of soil. Clouds sometimes produce NDVI values of their own, but if they aren't thick enough to do so, they may throw off measurements considerably.

EVI, or the Enhanced Vegetation Index, was created to improve off of NDVI and eliminate some of its errors. It has an improved sensitivity to regions high in biomass and its elimination of canopy background. The equation for EVI is as follows:

Where NIR is again Near Infrared, and Red and Blue are of course those colors' bands. All three of these are at least partially atmospherically-corrected surface reflectances. The equation filters out canopy noise through L.

EVI has been adopted as a standard product for two of NASA's MODIS satellites, Terra and Aqua. As it factors out background noise, it's often considered to be more popular than NDVI.

This is a list of some useful remote sensing vocabulary: All of this can be found in the ccrs tutorial

Absorption: when substances absorb radiation
Active sensing: giving off radiation, then sensing the backscatter
Electromagnetic radiation: most common energy source for remote sensing consisting of an electric and magnetic field perpendicular to each other and the direction of travel while traveling at the speed of light c (3.0 m/sec)
Frequency: the number of waves passing a given point in a given amount of time; measured in hertz
Image: any pictoral representing any wavelength used in sensing
Orbit: path followed by a satellite
Passive sensing: sensing naturally available radiation
Radiometric resolution: ability of sensor to discriminate very small differences in energy
Reflection: when radiation is redirected upon striking a target; this is the target interaction useful for remote sensing
Remote sensing: the science of acquiring data without being in contact with it
Scale: ratio of size on image to real-life size
Scattering (or atmospheric scattering): when particles in the atmosphere redirect radiation
Spatial resolution: smallest detail a sensor can detect
Spectral resolution: ability of sensor to distinguish between fine wavelength intervals
Swath: area imaged by a satellite with a fixed width
Temporal resolution: describes the time between which the same area is viewed twice
Transmission: when radiation passes through a target
Wavelength: the distance between two crests of a periodic

Know what types of instruments will be used for certain applications.

RADAR: short for Radio Detection and Ranging. It transmits radio waves, which are scattered and reflected when they come into contact with something. They can pass through water droplets and are generally used with active remote sensing systems. Radar is good for locating objects and measuring elevation.
LIDAR: short for Light Detection and Ranging. It is similar to RADAR but uses laser pulses instead of radio waves.
TM: stands for Thematic Mapper. It was introduced in the Landsat program and involves seven image data bands that scan along a ground track.
MSS: stands for Multispectral Scanner. It was introduced in the Landsat program also, and each band responds to a different type of radiation, thus the name “multispectral”.

Most of the satellites tested for are NASA-related.

A-Train: a satellite constellation scheduled to be with seven satellites working together in Sun synchronous (SS) orbit. Their compiled images can have high-resolution results.

Landsat: A series of 7 satellites using multiple spectral bands. Only two are operational today (Landsat 7 and Landsat 5) These are generally the most commonly tested satellites, as well as those using the ASTER sensor.

The second portion of this event requires the use of knowledge of forest biomes and the interaction of humans with them.

There are three major types of forests, which are all characterized by the amounts of trees growing in them.

As humans have expanded their reign over the planet, the health of the forest biome has taken a hit. Effects of humans such as deforestation threaten the well-being of the planet, especially since forests play an important role in processes such as the water cycle, carbon cycle, and ecological diversity.

"Participants will use remote sensing imagery, science and mathematical process skills to complete tasks related to an understanding of the causes and consequences of global warming." - Remote Sensing rules 2009

You may bring five (5) pages of double-sided paper with notes in any form. Each participant may bring any non-graphing calculator.

This event is essentially a test based on identifying satellite imagery. Be prepared to study about and memorize different NASA space programs aimed at imaging earth from space. Also, learn to identify different human constructions based on satellite photos. Test questions will often be open-ended, with answers to questions based on analysis of such satellite images in visible, infrared, and radio wavelengths. Other such images include but are not limited to charts of variation in average temperature and measure of chlorophyll concentration in the ocean. </spoiler>