The device is placed inside of the Competition Area, which is a 75cm by 75cm square. There is a designated 25cm by 25cm zone in which the robot (except for the end effector) must remain in at all times. Outside of the device square, there's a standard 40cm archery target. Stacks of ten pennies are placed at the bottom left (from bird's-eye view) of the Competition Area, as well as in the bottom, top, left and rightmost areas of the target. These pennies are all placed heads up.

For designs of the robot on a whole, refer to:

In order for it to function, your Robot Arm will need a base. This can be made out of any material, as long as it fits within the designated 25 cm by 25 cm square. Something to keep in mind is that the base needs to be heavy enough to prevent the device from tipping over while the arm is moving objects around. The base should contain a motor used to spin the arm. 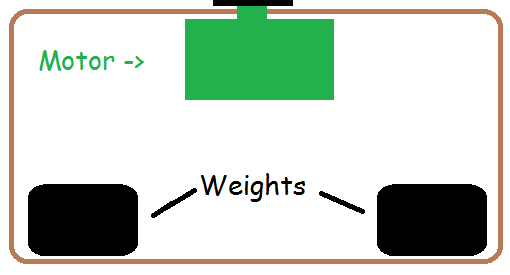 One possible design of a base

Since the event is named Robot Arm, teams should probably include arms in their devices. If a team wishes to maximize points, then their arm needs to reach about 52 cm (from the center of the designated arm square to the North pennies). The arm only needs to reach about 30 cm outside of the base box if the operator plans on only utilizing the East and West Goals. In order to utilize the North Goal, one needs to build a device to be sturdy and stiff enough to keep the arm from breaking or flexing, while also keeping it lightweight so that the motors are able to handle the load.

Arms will also need to include a number of joints. Most arms will have three joints, though some have up to five and some have only one (though when designing the arm, keep in mind that the number of motors on your device is a tie breaker). Each joint must have a motor in order to move its position, as well as some kind of support for the axis of the joint. Most servo motors are strong enough that with an added bracket, the servo can be both the motor and axis of rotation.

Almost all hobbyist-made robots utilize servos. A servo is a complete package of a motor with gearing, a position sensor, and control. Originally made for remote control (RC) vehicles, the servo has been widely adopted in robotics for their small size, high strength, and ease of use. Servos come in many varieties of size and strength but for the most part have fairly standardized system, with all servos being made to the same size specifications. Categories of sizes include Micro, Mini, Standard, and Quarter/Giant scales.

For those new to robotics, choosing the right servos can be a daunting task given such a broad range of choices. The most important factor when choosing a servo is its torque rating. For an easy way to find out how much torque you will need at each joint, use this calculator. The main (and really only) downside to servos is their limitation of rotation. Most servos are limited to 180° and are further limited to only 90° when using most RC control systems.

Other options for motors include those found in proprietary kits, such as VEX or Lego NXT. More advanced builders may prefer to use stepper motors or even build their own motor/gearing/control systems, though doing so will require much knowledge of both mechanical and electrical engineering.

The End-Effector is the part of the arm that interacts with the objects on the playing field. There are two broad categories of end-effectors: active and passive. The rules permit detachable passive end effectors for the 2016 season.

An active end-effector is one which consumes energy in order to function. The most common examples include a claw/gripper and electromagnets. Certainly the most common and arguably most useful active end-effector is the claw/gripper. It is advisable to include one on the arm because, if designed properly, it can pick up all the objects on the field. Designing and building a non-commercially sold gripper is a difficult task given the tight tolerance in construction, so most teams will find it easier to buy a pre-made gripper or use an assembly kit.

Some teams may include an active end-effector rather than a basic gripper. Doing so can greatly increase competition efficiency and speed by using specialized tools to pick up certain and often difficult items. Coming up with an idea for an active end-effector is mostly left up to creativity, but the most common example is the electromagnet, which can be used to pick up the nails, and possibly the pencils or batteries (all of these are objects from the 2011 and 2012 seasons). However, this end effector would be mostly ineffective for the 2016 season, since the only metallic things on the playing field are the ferrules on the pencils.

Passive end-effectors are those that do not consume energy to function. Picking up objects without consuming energy is difficult and there are only a few known ways to do so. The most common are permanent magnets and adhesives. Magnets, however, are not advised for the 2016 season because nothing on the playing field is ferromagnetic. Adhesives can be used to pick up any item on the field, though it should be noted that it must be temporary and any damage to the objects could result in disqualification. Many find that tape, such as 3M double-sided tape, works great and does not leave any residue or damage. The most important factor is that they must be detachable in order to be advantageous. This means that when one drops an object in the goal box, the end-effector goes with it. The most efficient way to manage this is to have several passive end-effectors that an active gripper may grab and use to easily pick up a nail before depositing it, and the end-effector, in the goal box.

Kits generally fall into two categories: self-made and pre-made. Self-made kits are those that are not already assembled, and often will require you to come up with your own design for assembling the included pieces into an arm. Pre-made kits are those that come already assembled/ready for use and are intended by the manufacturer not to be disassembled or modified. Pre-made kits must be modified in some way to comply with the rules, whereas self-made should not need to be.

For teams who don't know where to start with this event, there are an astonishing amount of fair priced (~$40) robot arms on eBay and Amazon that look very functional and could be a great solution or even just a good starting point to learn the functionality. These arms could potentially be regional or even state winning. One very common kit used is the OWI arm, which can be slower than other arms, but is a good place to start if you don't know what you're doing. However, it is important to remember that you must make a functional modification to your kit. You can also buy parts at online stores such as RobotShop.

There is a wide variety of methods to control the arm, ranging from simple plug-and-play systems to fully automated computer control. Teams can also choose between wired and wireless, though in most cases wireless with be much more expensive.

This is by far the simplest and cheapest way to make a control system. It uses switches hard wired to simple DC motors and a battery. Flipping the switches turns motors on or off.

Using a remote control (RC) system is usually rather simple, but it can be expensive, ranging from under a hundred to several hundred dollars(depending on the kind). For the inexperienced, visiting a local hobby shop and talking to the experts there can be a great way to learn about your options; hobby shops can often provide good deals on used systems.

The basic RC system comes with a transmitter and a receiver. The battery and servos are plugged into the receiver and the controls on the transmitter are used to control the position of the servos. An Electronic Speed Control (ESC) can also be used to throttle a DC motor. The only downside to using an RC system with servos is that most limit the servo's range to 90°; some systems can be programmed to extend the range, usually to 180°, but these systems usually cost more.

Using a microprocessor opens possibilities, and at around $20 (Arduino UNO R3), it isn't enormously expensive. However, to fully utilize, it requires knowledge in both programming and electronics. Microprocessors allow use of a variety of input devices, including potentiometers, laptops, joysticks, buttons, and completely custom built controls. If a team wanted to be fancy, it can program the arm to do the entire event by itself, with or without sensors to correct errors. Using a microprocessor requires a control board, such as the Lynxmotion Bot Board II or the Arduino, and the actual microprocessor, such as the BASIC Atom family. A complete computer, like the Raspberry Pi, can also be utilized to run C,C++, or Python programs in order to control actuators and read sensors.

One particular type of controlling system which is dependent on a microprocessor is the master-slave system (or the politically correct name, motor match system). For this, a "Master" arm, an arm identical to the actual robotic arm (called the "slave" arm), is used, except where there are motors in the slave arm, there are potentiometers in the master arm. Then the potentiometers are wired through the microprocessor. As the master arm is physically manipulate, the microprocessor will determine a position from the potentiometers. It will then match this position with the motors in the slave arm so that the slave arm mimics the position and movement of the master arm. The PID control algorithm is primarily implemented for this type of error-reduction problem. It is a relatively easily used and incredibly efficient control system. The top teams at Nationals in past years have all used this system (for the most part).

This event is typically about 30% design and 70% practice. A team could have a design that could win at nationals, but without practice, it means nothing. The best way to practice is using the setup used for competitions. Printable layouts for a practicing arena can be found here. After practicing for a while, teams should develop an efficient plan for the order you will move the objects, as well as how they will move them. A finalized version of this the plan is part of the documentation handed in to event supervisors on the day of the competition.

The scoring is based on the pennies that are on the target at the end of the run. Depending on how close the penny is to the bulls-eye, it gets more and more points. In addition, if the penny is also tails-side up, it receives double the listed score for the zone of the target it's in. 10 additional points will be awarded if the arm is entirely contained back in the original 25 by 25 by 100 cm space (Device Square) at the end of the run. Each team gets 2 runs that are 3 minutes long.