Difference between revisions of "Roller Coaster"

Roller Coaster was a Division B for the 2019 season, which replaced Mission Possible. It was previously a trial event in many states, as well as at the 2017 National Tournament and 2015 National Tournament. The objective of the event is to design and build a roller coaster, using spherical vehicles, to travel the track as close as possible to a target time between 10 and 60 seconds.

The roller coaster must be within these dimensions: 50 cm length × 50 cm width × 60 cm height.

The track can be made of anything except for commercially sold tracks such as Hot Wheels. The vehicle, at all times, must be visible to the event supervisor. As of the 2018-2019 season, funnels are allowed to be used, as long as it is constructed such that the ball is visible at all times. The track can have 3 gaps, in which they can contribute to the total "gap bonus". In order to qualify, the gap must have a horizontal span of 5 cm and the vehicle must be unsupported. These gaps must be labeled.

The vehicle can be any spherical object. Some possible items include marbles or ping-pong balls. Different objects will move along the same track at different speeds and may be otherwise affected - for example, some vehicles may require a steeper slope to begin moving. The vehicle, if not passing through a gap, must be traveling on the track at all times (e.g, it can't bounce off of the track).

Time Target and Other Construction Rules 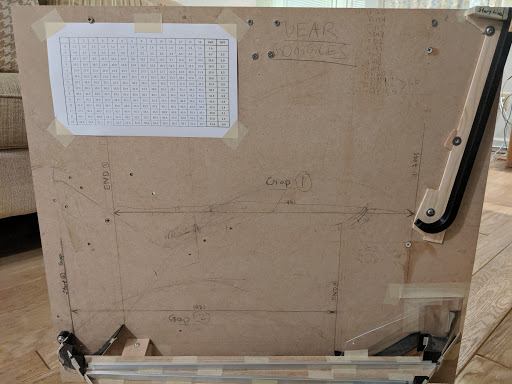 In the above picture, only two gaps were constructed. Commonly, a "regain" will be built after each jump. After having one large jump, another ramp with a not as steep incline would be built, conserving all the energy which would otherwise be wasted after each jump. As of the 2019 season, a large majority of teams used a "C" or "U" jump as the 2nd, or even 3rd jump. The ball would land at the bottom of the C, indicated by the pencil lines drawn on the wooden board. It would then loop around and shoot out, out of the top of the C, allowing the ball's energy to be almost fully conserved. This allowed teams to get upwards of 80 centimeters of gap. The roller coaster pictured above had a total of 86 centimeters of gap.

Commonly, a foam pipe insulation cut in half can be used as the track. It can then be elevated using wood dowels, attaching it to the base with hot glue, super glue, wood glue, nails, etc. In this method, a good train would be a marble or other small, round object. If the time target is not being achieved, try increasing or decreasing the weight of the train. Another method would be, similarly, PVC pipe cut in half with joints, though it would be harder to make turns.

However, many teams also use 3d printed gaps, or commonly even metal or aluminium gaps. With a material like aluminium, the lack of friction allows the ball to jump even further.

The use of oil, even the tiny bit of sweat on your hands, would easily affect the amount of gap that the ball gets. By using gloves or wearing a protective cover around your hands, as well as making sure the ball is free of any foreign substances, is recommended to allow consistency in gaps.

In addition, different densities and sizes of the ball can also change the amount of gap you may get. In the device pictured, a PTFE ball, with a diameter of 1/2" was used. However, metal balls are also used for consistency. Furthermore, a regular marble is the most common, as they are the most accessible to most teams. These are not the only methods. Feel free to try things out on your own and find out what method works best for you!

Here is one made out of paper.

A team's score is determined from their single best run. A run's score is calculated based on the height of the device, the accuracy of the run (closeness to the Target Time), and the Gap Bonus. The way the current rules are written, more points can be gained through the gap bonus than through any other method, making gaps extremely important. Teams with construction or competition violations, or teams who missed impound, are ranked in lower tiers (specified by the rules). Failed runs will receive a score of zero, but will be ranked above teams with violations.