Difference between revisions of "Sounds of Music"

Sounds of Music is an event in which two participants build one homemade instrument, play a scale on their instrument, complete a volume score test, and explain the physics of sound through a written test.

The main part of Sounds of Music is the building of the instrument. You will need to build one durable, original, and creative instrument with which you will play a scale. You will also need to answer questions about the theory of your instrument and how you built it.

For 2019's competition, participants are required to build one instrument of any type, barring electrophones. The instrument must be played in such a way that all energy put into the instrument to make a sound must originate from the team. This differs from rules prior to the 2019 season, which had competitors building two instruments.

When building your instrument, you'll have to be creative. No commercially available instrument parts are allowed, (i.e. mouthpieces, mallets) excepting strings. Experiment with different materials. PVC pipe is a common material that is cheap and easy to make into an instrument; PVC pipe aerophones are very common.

Other instruments very commonly made include idiophones (xylophone, marimba, etc.). You will also want to experiment with materials if you are building one. Try different types of metal pipes and different types of wood to see what works best. There are several resources online that will give you the exact length to build the bars, but you will need to fine tune these so you get the exact pitch.

When building a idiophone or other percussion instrument that is hit, you will also need to consider the material with which you build the mallets. If you use a soft material such as rubber or yarn, the percussion instrument could be drowned out by a wind instrument. If you use harder materials, the instrument will have a harder, clearer tone, but the tone quality may suffer. Once again, you'll have to experiment to see what suits your playing style best.

Remember that your instrument MUST be in the allowable range. For the 2018-2019 season, the range of the instrument must be from F2 to F5. See this page for more about determining pitch.

An idiophone is a instrument in which the vibration of the instrument itself is what creates sound. They are generally the percussion instruments that are hit, shaken, or rubbed to create sound. Resonators can also be added to these instruments to create a sound.

In this event, the major type of idiophones created are xylophones, marimbas, or chimes. When you double the length of a bar, you cut the frequency in a fourth (put it down two active octaves). So in these instruments, to go down an increment of the scale, you must decrease the note length by a factor of the 24th root of 2. These also require you to fine tune (sand/file).

Examples of idiophones include

Membraphones are instruments which have a vibrating membrane over a resonator to create sound. These instruments are generally harder to build and perfect.

Examples of membranophones include

Examples of aerophones include

In chordophones, sound is produced by a vibrating string. The vibration of strings produces standing waves producing fundamental frequency as well as harmonics (the relative abundance of these make up the timbre of your instrument). Resonators added to the string will enhance the sound by vibrating sympathetically with them.

In chordophones, the wavelength made is twice the length of the string. Since we know that velocity equals frequency time wavelength, after assuming that the velocity of sound in the string will remain constant, we find that when one doubles length, frequency will be cut in half (note goes down an octave). Because the relationship between length and frequency is exponential we know that for every increment one goes up in a scale (1/12), the note increases by a factor of the 12th root of two. You can use this fact for starting your tuning. Unfortunately, you'll need some fine tuning and many hours to get your instrument to play accurate notes due to imperfections in string and to the fact that there will be different amount of tension on different strings (when playing different notes on single guitar string, there will be different amounts of tension). This will result in different velocities of sound in the string, making this form of tuning less reliable.

Examples of chordophones include

NOTE: Electrophones are not allowed under the rules for 2013 and beyond.

Concerning electrophones, sound is produced by an electrically powered oscillator. It is highly unlikely anyone will build this type of instrument for Sounds of Music anytime in the near future, and it is also barred from competition under 2013 rules.

While much of the work for the Sounds of Music event takes place before the competition, in the form of building, tuning, and practicing, only one part actually counts for Science Olympiad, and that is the competition.

The most points are given for the written test. In a separate room from the instrument testing area, you will have at least 20 minutes to complete at least three questions from each topic:

When you arrive in the competition room, you will have two minutes to set up. This normally isn't a problem, as most instruments are mounted or otherwise ready to play. Some teams do bring xylophones that are not mounted or otherwise connected, and these teams will likely use the majority of the time. The room will likely have very few resources. Some competitions may provide a table or desks to place xylophones on, but it may be smart to bring your own portable table just in case. When setting up, competitors and their instrument have to be 1 meter away from the testing equipment, and failing to do so may result in a penalty.

During the setup time, introduce yourself to your judges. Provide information such as your name, your school name, the type of the instrument you created, and the scale you will be playing.

The main testing component will be a pitch score test. You must play a major scale - any major scale - and hold each note for five seconds. If you wish to skip any notes, you must declare that beforehand. You will be scored per note. Multiple attacks on each note are allowed, and the average pitch on each note counts for the score. Two apps were recommended by Soinc for measuring pitch in this event: Google Science Journal and Accord Chromatic Tuner (only available on Android).

The volume score test will involve playing a single note from your scale for five seconds. Multiple attacks are allowed. The highest volume in decibels at a distance of one meter will count for the final volume. If the instrument registers a volume louder than 85 decibels, the volume test will end and 85 decibels will be recorded.

The last portion of the event is the log score. You must submit logs containing a list of materials used, a chart showing how you tuned (with at least 5 data points), proper labeling, and a diagram that shows how the instrument is played.

Sounds of music tests jump from topic to topic depending on the test writers. While the physics of sound is guaranteed to surface, tests have in the past borrowed anything related to sound from a broad umbrella of disciplines beyond merely physics. Both partners should expect to study a variety of content beyond physics, music theory, and instrument building. With this in mind, it is important to not lose motivation because of random questions, as most teams will also face comparable difficulties in grasping seemingly random content.

From the music of a concert, the creak of a door, to the gusts of the w ind, sound permeates our world. This is true quite literally—sound occurs when molecules of air vibrate, jostling and pushing against each other. By vibrating, these molecules hit neighboring molecules, which in turn hit and bump their neighbors into vibration as well. This molecular chain continues to radiate outward from the original source, and, if the vibrations find their ways to our ears, we may hear it as sound.

This process of vibration is a form of a wave. A wave that propagates through a physical material has a wavelength, frequency, and speed. The wavelength ([math]\lambda[/math]) of a wave is the length traveled by the wave before it repeats itself. The frequency ([math]f[/math]) is the number of times the wave repeat in a given time. For instance, if 15 wavelengths of a wave pass by a point in 3 seconds, the frequency there will be 5 cycles of the wave per second, or 5 hertz, which is the SI unit of frequency. Wave speed ([math]v[/math]), as you probably guessed, is the rate of distance traveled per time. These three quantities are related by the equation [math]\lambda f=v.[/math]

Propagation of a longitudinal wave

Propagation of a transverse wave

Interference/superposition - Sound waves, when encountering each other, will undergo interference. This means that at every point where both waves overlap, the pressure difference there will equal the sum of the pressure differences of the individual sound waves. Since it's as though we have added the waves on top of each other, we also call this the principle of superposition. 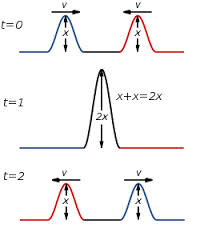 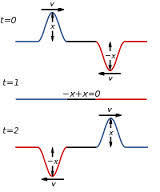 Diffraction - Diffraction is the phenomenon where waves spread around an object. It is partly diffraction in play when you hear sound despite being behind a wall, doorway, or other obstacle—the sound spreads out from an opening to diffract around the object, moving radially away from any boundaries.

Diffraction may be considered as a consequence or a special case of interference. Obstacles that block part but not all of a sound wave essentially convert the unabsorbed sound into one or more point source of sources of sound, which seem to emit sound waves radially and perhaps interfere with each other.

Dispersion - In many media which we are accustomed to, sound only travels at one speed. This does not have to be the case, however. When waves of different frequencies travel at different speeds, this is called dispersion. Air is non-dispersive, but water and ice do cause dispersion of waves.

Reflection - Reflection occurs when a wave encounters a boundary and as a result moves in the opposite direction. Reflection is responsible for both echoes and reverberation.

A common mistake made by students is to assume that only solid obstacles can cause reflection. While walls and other non-absorbent obstacles may be familiar to most of our everyday experiences, sound waves can reflect off of many sorts of boundaries. For example, it is possible for sound to travel into the upper atmosphere before reflecting back down to the ground.

In 2019, Sounds of Music underwent significant event changes. The following section details the event structure under the old rules, for reference and in the event that the old structure returns in the future.

Here are websites with tutorials to make instruments: