Protists are organisms that do not fit into any other categories. They are eukaryotic organisms, however they are not animals, plants or fungi. Only one phylum under Kingdom Protozoa is on the 2020 fossil list - Foraminifera.

Diatoms are not on the official 2020 Fossil List, but have been on the list in the past.

Scyphozoans are not on the Official Fossil List in 2020, but have been on the list in the past.

Falling into this category are some sedimentary rocks, trace fossils, and stromatolites.

A trace fossil, also known as an ichnofossil is a geological record of biological activity. Ichnology is the study of such traces, and is the work of ichnologists. Trace fossils may consist of impressions made on or in the substrate by an organism: for example, burrows, borings (bioerosion), urolites (erosion caused by evacuation of liquid wastes), footprints and feeding marks, and root cavities. The term in its broadest sense also includes the remains of other organic material produced by an organism — for example coprolites (fossilized droppings) or chemical markers — or sedimentological structures produced by biological means - for example, stromatolites. Trace fossils contrast with body fossils, which are the fossilized remains of parts of organisms' bodies, usually altered by later chemical activity or mineralization.

Stromatolites are layered mounds, columns, and sheet-like sedimentary rocks that were originally formed by the growth of layer upon layer of cyanobacteria, a single-celled photosynthesizing microbes (the oldest evidence of photosynthesis on Earth). Stromatolites typically formed in shallow water. Some structure types that some stromatolites exhibit include conical, stratiform, branching, domal, and columnar types.

Amber is fossilized tree resin. Amber is produced by molecular polymerization, resulting from high pressures and temperatures produced by overlying sediment, transforms the resin first into copal (similar to amber, but produced at a lower temperature with less pressure). Sustained heat and pressure drives off terpenes (the sticky, smelly, sappy part of the tree resin).

For this to happen, the resin must be resistant to decay. Many trees produce resin, but in the majority of cases this deposit is broken down by physical and biological processes. Exposure to sunlight, rain, microorganisms (such as bacteria and fungi), and extreme temperatures tends to disintegrate the resin. For the resin to survive long enough to become amber, it must be resistant to such forces or be produced under conditions that exclude them.

Petrified wood is produced when wood becomes buried in water-saturated sediment or volcanic ash. The presence of water reduces the availability of oxygen which inhibits aerobic decomposition by bacteria and fungi. Mineral-laden water flowing through the sediments may lead to permineralization, which occurs when minerals precipitate out of solution filling the interiors of cells and other empty spaces. An area with many trees that have been petrified is referred to as a petrified forest.

Sedimentary rocks are rocks which have been formed by means of compaction and cementation. They are classified by the size and makeup of the sediment.

Coquina is a type of limestone made up of small shells that have been compacted together. The shells are typically that of molluscs, trilobites, brachiopods, and other invertebrates. Coquina tends to accumulate in high energy marine environments. Coquina is mainly composed of the mineral calcite.

Fossil limestone is a rock made of limestone that can be microscopic or visible. These rocks are very prevalent in Lagerstätte around the world. 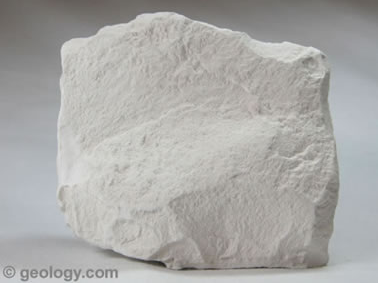 Chalk is a white, very fine grained version of limestone, formed from the compaction of many shells of microscopic organisms called coccolithophores. It was originally used as chalk in schools, but different minerals are used today.

Sandstone is what the name says: sand-sized grains that have been compressed into a rock. Most types of sandstone are made of quartz and feldspar. Common colors of sandstone are Tan, black, gray, white, and pink. In marine environments sandstone is typically created in shallow ocean areas, such as deltas, beaches, and tidal flats. On land sandstone is commonly formed in rivers, streams, and lakes.

Mudstone (also known as siltstone) is a sedimentary rock similar to shale in that it has very small particles, but is made out of compact mud and silt rather than clay. Common colors of mudstone are tan, brown, and gray.

Shale is a type of mudstone that exhibits lamination, or very thin layers (similar to a flaky pastry). It is a mix of clay and other small fragments, typically pieces of quartz and calcite. Because shale contains small particles of various minerals, it can also appear in a variety of colors. Common colors of shale are brown, gray, tan, and black. Shale is a common fossil preserving rock, due to its sedimentary nature. Lagerstätte on the fossils list that are composed mainly of shale include the Burgess Shale and the Mazon Creek fossil beds.

Chert is a hard sedimentary rock composed of many fine pieces of quartz, also known as silica. Chert is typically found as a result of fossilized ooze, found in large amounts on the deep ocean floor. It often contains the remains of diatoms, as well as other small organisms. Similar to shale, if trace elements are left over in the rock it may exhibit different coloration. However, chert is most commonly gray, brown, or red.