Difference between revisions of "Water Quality"

A comprehensive list of organisms that must be able to be identified are located here.

Water quality includes the physical, chemical and biological characteristics of water. In countries around the world, especially in the U.S., standards are set to determine whether water is potable, or safe to drink, under the direction of the EPA.

The teams must also be able to identify both immature and adult forms of certain macroinvertebrates and aquatic nuisance organisms, and know their importance as indicators of water and wetland quality. Division C teams must also know the general ecology, life cycles, and feeding habits of all these organisms. For more information about these macroorganisms, see the Macroorganism List

Each team is also responsible for knowing these same facts about the following Aquatic Nuisance Plants and Animals.

Treatment in the US costs $12 billion a year, and is expected to double in 10 years.

Septic-Tank Disposal Systems: This is the conventional method for treatment. A sewer line from the house leads to an underground septic tank in the yard. This tank is designed to separate solids from liquid, digest and store organic matter, and allow the treated sewage to seep into the surrounding soil. As the wastewater moves through the soil, it is further treated by the natural processes of oxidation and filtering.

This method can fail if the tank isn't pumped out when it's full of solids or if there is poor drainage in the surrounding soil. 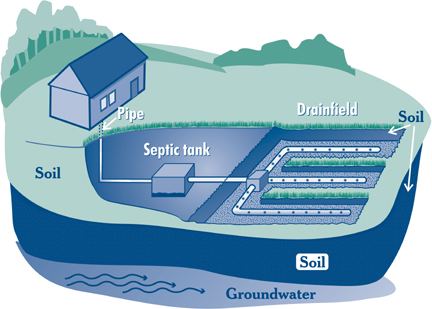 Wastewater Treatment Plants: Raw sewage is delivered to the plant through a network of sewer pipes. Following treatment, the wastewater is discharged into rivers, lakes, or the ocean.

This event covers nutrient cycles such as the carbon, nitrogen, sulfur, and phosphorous cycle.

A major part of Water Quality deals with the analysis of a particular body of water, such as a stream, for different properties. These properties include salinity, pH, alkalinity, phosphates, nitrates, turbidity, dissolved oxygen (DO), temperature, fecal coliform, total solids, and biological oxygen demand (BOD)

In order to test salinity, your team must construct a homemade salinometer/hydrometer capable of measuring saltwater concentrations from 1-10%. Typically, this section will be worth about 5% of the test. The vast majority of salinometers are based on the principles of density and buoyancy. Since saline solutions contain dissolved NaCl, their densities are higher than that of distilled water. Due to the elevated density, the solution exerts a higher buoyant force, causing the hydrometer to float higher than in distilled water. There is a direct relationship between salinity and and buoyant force - the more saline the water, the higher your hydrometer will float.

To make a rudimentary salinometer, get a drinking straw and some clay. Place a ball of clay on one end of the salinometer, completely covering the opening of the straw. Then make some solutions of water and salt, with the salt concentration being between 0% and 10%, and mark the meniscus of the water solution on the straw with a permanent marker, Sharpie, etc. Repeat for any number of solutions for a more accurate calibration. The amount of clay and the length and diameter of the straw affect the distance between marks on the salinometer.

Note that this is not the only way in which to make a salinometer, and you may create and invent ways to do it yourself.

pH is an important water quality indicator because organisms can only tolerate water that is not too acidic nor too basic. The normal pH of rivers in the United States is 6.5 to 8.5, and values between 6.0 and 9.0 can support life for fish and invertebrates. This makes acid rain an important factor in water quality, since it will make water more acidic, and once the pH value approaches 6.0, negative effects begin to appear. The natural environment of an area can also affect pH. Limestone is a base when dissolved in water, so it can neutralize the effects of acids. Volcanoes, geysers, and hot springs will make water more acidic, as well as the presence of sulfur in nearby minerals.

Alkalinity is the ability of a solution to neutralize an acid. There are several ions that contribute to alkalinity, including bicarbonate, carbonate, hydroxide, and phosphate. Thus, limestone contributes to alkalinity, since its formula is calcium carbonate, and carbonate is one of the ions listed above.

Phosphates are able to enter waterways in a variety of natural ways such as rocks or normal animal and plant waste in the water. Human sources such as fertilizers, pesticides, industrial and cleaning compounds, septic tanks and wastewater from sewage treatment can increase the amount of phosphates in the water. The phosphates of a river or stream are usually measured in Parts Per Million (ppm).

Ammonia is oxidized to form nitrates. Some human sources that can add to the total amount of nitrate in the water are fertilizers, poorly functioning septic tanks, inadequately treated wastewater from sewage treatment plants, manure from farm livestock, animal wastes including fish and birds, storm drains, runoff from crop fields, parks, lawns, feedlots and car exhausts. Nitrates, like phosphates, are test in Parts Per Million (ppm).

Turbidity can be measured in nephelometric (NTU’s) or JTU’s Jackson–Contaminants. To test the turbidity of the water, people use a Secchi Disk and when measuring, depth is usually reported in feet to the nearest tenth of a foot, or meters to the nearest tenth of a meter. Light can penetrate to a depth of about 2-3 times the Secchi Disk depth. Seasonal variations can change the turbidity of a lake and lake turnover can also change it because of nutrients being released.

Air is about 21% oxygen which is 210,000 ppm. Most surface waters contain between 5 and 15 ppm of dissolved oxygen. If a stream or river has below 5 ppm of dissolved oxygen, then that can put aquatic life under stress, and below 1-2 ppm for a few hours can kill large fish living in the river. Total dissolved oxygen levels should not be greater than 110% at any point. When dissolved or suspended solids are present in the water, this can reduce the effectiveness of dissolving of oxygen in water and can be problematic for organisms living in the water. Dry periods can lower stream discharge and raise water temperatures. From night to day, DO will fluctuate dramatically. When algal blooms are present, they can cause large fluctuations in DO through the night especially in areas where there is not much current for aeration. The primary reasons for a fluctuation in the amount of DO because of humans is dumping, sediment erosion, or the release of water from a dam.

If the temperature of the water increases, this increases the sensitivity of organisms to disease, parasites, and pollution. When small changes in temperature occur in the stream, these can adversely affect the reproductive systems of aquatic organisms such as macroinvertebrates or fish. Temperature change can be caused by many things such as: natural seasonal changes, anthropogenic activities, industrial thermal pollution as discharge of cooling water, or storm water runoff from heated surfaces like streets. Soil erosion increases water turbidity and this will also increase the temperature of the water. The removal of trees and brush from the side of the river will not only increase erosion, but it will also increase the amount of sunlight that hits a river or stream.

The total solids of the water measures the suspended and dissolved solids in the body of water. Suspended solids can be retained on a water filter and will settle to the bottom of a water column and include silt, clay, plankton, organic wastes, and inorganic precipitates. Dissolved solids pass through a water filter and include calcium, bicarbonate, nitrogen, phosphorus, iron, and sulfur and other ions in the water. Concentration of dissolved solids in stream water is important because it determines the flow of water in and out of the cells of aquatic organisms. Many of the dissolved solids (nitrogen, phosphorus, and sulfur) are essential nutrients for aquatic life. Low concentrations of total solids can limit growth of aquatic organisms, while elevated levels can lead to accelerated eutrophication of the water system and increase the turbidity of the water. Both of these consequences decrease the overall water quality of the water. Sources of elevated levels of total solids may result as a result of runoff from agricultural activities, dredging, mining, salt from streets in winter, fertilizers from lawns, water treatment plants, plant materials, soil particles and soil erosion, and decaying organic matter. High concentrations of suspended solids can reduce water clarity, increase turbidity, reduce photosynthesis levels by reducing the sunlight that reaches plants, increase water temperature due to increased absorption of light at the water surface, and bind with toxic chemicals or heavy metals.

The biochemical oxygen demand (BOD) measures how fast organisms use up the oxygen in the water. Aerobic microbes use oxygen to oxidize the organic matter in the water. BOD is tested using the maters for testing dissolved oxygen but the test is done over a period of time to determine the rate of oxygen being used. Oxygen used for decomposition processes rob other organisms of oxygen needed to live Organisms with low tolerance may die off and be replaced by organisms with more tolerance for low oxygen levels.

You may bring in one two-sided page of resource notes and 2 non-programmable/graphing calculators. You must bring Class 4 eye protection. You may also bring a salinometer as well.