Difference between revisions of "WiFi Lab"

An antenna is an instrument that can be used for transmitting and/or receiving electromagnetic waves (usually radio waves). Transmission antennas work by emitting energy as electromagnetic radiation. Reception antennas absorb energy and use it to generate an electric current. 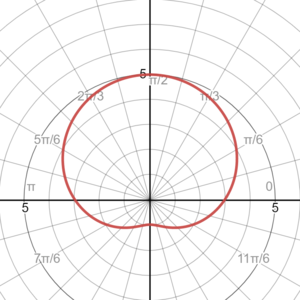 One significant property that all antennas have is that their transmission and reception radiation patterns are always the same. This fact is known as reciprocity.

An antenna's directivity describes how concentrated the power output of the antenna is in any direction. An isotropic antenna, one that has a perfectly spherical radiation pattern, radiates equally in all directions (since the radius is the same in all directions), so it would have a directivity of 1. Although directivity is technically a function that outputs the directivity at any given angle, it is commonly defined as a constant in terms of the direction of greatest radiation (which is the definition used in this page). 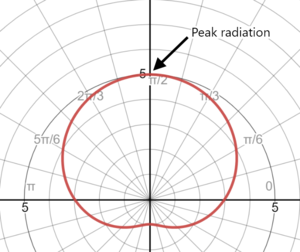 The formula for gain is [math]G = \eta D[/math], where [math]\eta[/math] is the efficiency. This, in turn, is calculated as [math]\eta = \frac{P_{out}}{P_{in}}[/math], where [math]P_{out}[/math] and [math]P_{in}[/math] are the total power output and power input of the antenna, respectively. Efficiency essentially measures how much of the input power is actually emitted by an antenna. For an antenna that outputs all of the power put into it, the efficiency would be equal to 1 and the gain would be equal to the directivity. Such an antenna is often referred to as an isotropic antenna.

Impedance is a measure of opposition against an antenna's transmission. The idea of impedance is related to that of resistance in a circuit. Impedance is measured in ohms, with the symbol [math]\Omega[/math] (uppercase omega). The actual impedance of an antenna is difficult to determine since it depends on the antenna, operating wavelength, and especially the environment.

There are numerous types of antennas and countless ways to classify them. Of these, the simplest type is technically the isotropic antenna, although it is purely theoretical and cannot be constructed. Instead, the isotropic antenna is mainly used as reference for properties of real antennas, such as efficiency, directivity, and gain. However, it is possible to construct a nearly-isotropic antenna by making it smaller than the wavelength it emits. This is the principle applied in half-wave dipoles, discussed below.

Dipole antennas are the simplest and most common viable antennas, and serve as the foundation for most complex antennas. They antennas consist of two wires or rods pointing out in different directions (usually opposite of each other but sometimes at an angle). Of the dipole antennas, the half-wave dipole is the most common. Half-wave dipole antennas are characterized by having a total length nearly equal to half the wavelength they operate at. The advantage of this design is that the radiation being transmitted lines up with each monopole (the wires or rods pointing out, a property known as resonance. This results in an omnidirectional antenna with optimal impedance, making it very useful for various applications such as communication and, in the past, television. 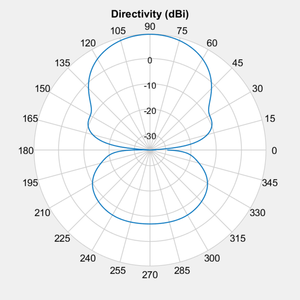 Image of a Yagi-Uda antenna radiation pattern in decibels isotropic (dBi). Note that, for a real Yagi-Uda antenna, there could be other lobes around the sides, but in this image only the main and back lobes are shown.

However, Yagi-Uda antennas can be noisy and can only operate from around 30 MHz to 3 GHz. In addition, since the design of the antenna depends on the wavelength (and thus, the frequency) at which the antenna operates, a single antenna cannot be used for multiple frequencies. Yagi-Uda antennas are most commonly used as receptors for television.

In general, antennas made up of a system of multiple antennas are referred to as array antennas. The main advantage of array antennas is the ability to increase directivity by having signals interfere constructively and destructively to boost the power in certain directions and cancel it out in other directions. This is done by adding different phase shifts to the signals of each antenna. Phase shifts are essentially shifts in the position of a wave that are used to create interference. Because of their high directivity, array antennas are used for everything from broadcasting to astronomy.

There are three main ways in which radio waves can be sent from a transmitter to a receiver. The simplest method is line-of-sight (LOS) propagation. LOS propagation occurs when the signal is sent straight from the transmitter to the receiver through the shortest possible straight line path. This method is primarily used for shorter distances as the signal can be affected by any obstacles in the way and can only be used when the transmitter and receiver are in view of each other. A slightly better method is ground wave propagation, where the signal travels in a curved path around the Earth, allowing it to travel farther. Sky wave propagation is the final method, which utilizes a layer of the atmosphere known as the ionosphere to bounce the signal to the receiver. The signal is sent up to the ionosphere, when it is reflected, hits the ground, and continues this cycle until it reaches the destination. Sky wave propagation is more difficult to conduct and can only be used within the frequency range from 2 to 30 MHz.