Difference between revisions of "Wind Power"

Wind Power, previously known as Physical Science Lab and Physics Lab, is an event for the 2017 season which involves the construction of a device that can turn wind into energy and the answering of questions relating to alternative energy.

The Basics of the Event

Half of the scoring for Wind Power comes from the building portion. Competitors must build a wind turbine mounted to an unmodified 12cm diameter CD. During competition, the judges will attach the device to a DC motor. They will then place a fan in front of the device and turn it on. The blades will spin, thereby creating voltage.

The other portion of the event is a written test on wind power, power generation, and alternative energy. One 3-ring binder full of notes from any source is allowed for each team, as long as the material in the binder is attached securely. Teams may bring multiple calculators of any type.

Category B safety spectacles are required for the blade testing portion of this event.

When you plan to build your device, there are many factors to consider. Some of them include:

Lighter blades will spin faster, but since in 2017 you must produce power (due to the resistors), a slightly heavier blade will have a higher momentum. There will be 2.5 minutes of preparation in order to get the blades up to highest attainable speed, so they can be somewhat heavy.

Various items can be used to construct the blades, but any type of metal is not allowed. Balsa wood or paper are often used for they are lighter materials. Everyday items can often be constructed into blades. For example, a plastic cup can be cut into fourths. Keep experimenting with different materials.

According to the New York Coaches Conference, doubling the diameter of the circle made by the blades produces a 4-fold increase in power. However, keep in mind that the radius of the circle created by the blades can be no more than 20cm (Div B) and 14cm (Div C).

Many teams have found that since real life wind turbines can create more power (watts, not voltage) by increasing the diameter of the blades, it is to your advantage to do so.

It is advised that the blade contains some curve, although it is not necessary in order to generate spin. A V-shape might also work. Materials may be morphed into the desired shape whether it be by cutting or molding. With some materials, such as wood, a certain shape can be achieved by soaking and bending the material in water. Not much curve is necessary. It is recommended that the blades have a curve to simulate an airfoil, while still keeping the blades aerodynamic. Keep in mind that more force is generated when the wind from the fan is blowing on the outside of the blade curve, but this is not what most people do. Most people curve it so that the wind hits the inside of the curve, as this provides quick acceleration (which isn't totally necessary, as long as it accelerates to top speed within 2.5 minutes), but also resulting in a top speed that is lower than if the wind was on the outside of the blade.

Blade pitch refers to the angle of the blades relative to the CD. Generally, a lower pitch results in a higher speed and thus a higher power (it will have a much slower acceleration but a higher top speed). One may want a higher pitch the closer the blade gets to the center of the turbine (eg. 20 degrees towards the center and make the front edge gradually get lower until around 5-10 degrees or so at the outside). Make sure your blade pitch is not 0 degrees, as the blades will not generate lift.

The number of blades is another adjustable variable. 2-3 blades is the most popular amount. Remember that more weight will gain more momentum, but at a point, too much weight will lower the high speed of the turbine. 4 or more blades can often be too heavy if the material is not light enough. However, if the blades are light enough, 4 may work better than 2 or 3.

Balance is also an important factor. If a turbine is terribly off balance, it may wobble on the mount, and possibly even break. As such, a well-balanced turbine will be able to spin faster since there will be less friction against the mount and less energy will be lost to vibration. It is best if a turbine's center of gravity is at or near the center. This can be accomplished by taking some mass off of the turbine on the heavy side, or by adding mass on the lighter side. A way to help make sure that you build your blade as balanced as possible is to make a device with a thin 1ft by 1ft thin piece of plywood with a metal/wood rod sticking straight out, and lines can be drawn on the sheet of ply going away from the rod at equal increments for which you can line up your blades as you glue them to the CD.

Although it may otherwise be a good idea, the rules say that "modification of the CD is not allowed (except to affix the blades via tape, glue, etc.)".

Make sure that your turbine is clearly within specs and labeled with your team's name and number.

The other half of the score is the written portion. The rules recommend that teams look at Alliant Energy and American Wind Energy Association.

Alternative energy is generally defined as energy that does not harm the environment directly. They usually do not produce carbon emissions and many times they are also renewable. There are several types of renewable energy, each with its own advantages and disadvantages.

Energy is the capacity to perform work. Work, in turn, is when a force is exerted on an object and the object moves parallel to the direction of the force. Work, in joules (J), can be calculated by multiplying the force applied in Newtons (N) to the distance traveled in meters (m). Power is the rate at which this work is performed, and is found by dividing the work by the time. It is measured in watts.

There are two major types of energy:

The Conservation of Energy principle states that energy cannot be created nor destroyed, and that it can only be transformed from one form to another.

Temperature is the average energy contained in the particles of an object. It is produced by the thermal energy in free particles. Many scales can measure temperature.

There are three main vehicles for transferring heat:

A is the cross-sectional area in [math]m^2[/math]

d is the barrier's length in [math]m[/math] 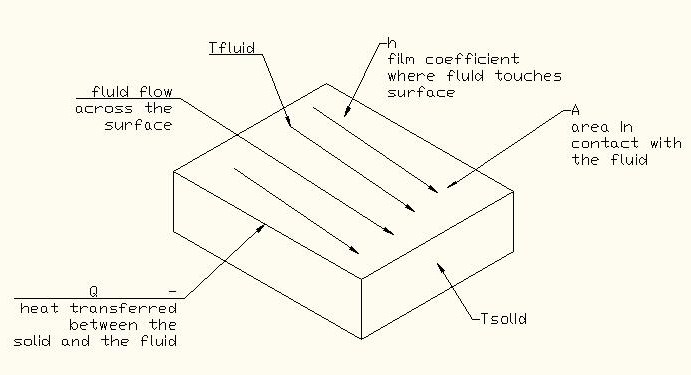 P is the radiated power in [math]Watts[/math]

e is the object's emissivity

T is the temperature of the radiating source in K and [math]T_C[/math] is the surrounding temperature.

This is the amount of heat per unit mass needed to raise a substance's temperature by 1 °C. It is represented by the following formula:

Where Q is the heat needed, C is the specific heat, m is the mass, and ΔT is the change in temperature. Every substance has its own specific heat. For example, water's specific heat is 4.184 J/g*K

Only a certain amount of energy can be harnessed from the wind; 59.3%; the theoretical maximum coefficient of power for any wind turbine.

The optimum size of a conductor for a given voltage and current can be estimated by Kelvin's law for conductor size. Kevin's Law states that the size is at its optimum when the annual cost of energy wasted in the resistance is equal to the annual capital charges of providing the conductor. At times of lower interest rates, Kelvin's law indicates that thicker wires are optimal; while, when metals are expensive, thinner conductors are indicated: however, power lines are designed for long-term use, so Kelvin's law has to be used in conjunction with long-term estimates of the price of copper and aluminum as well as interest rates for capital.

For the building set-up, there will be 2 stations: high speed and low speed. These may be at the same fan, but if they are at different fans, all teams will test at high speed at one and at low speed at the other. The event supervisors will provide the testing mount for your blades (don't bring your stand, ONLY the cd with blades attached). They will also provide the fan, motor/generator, load resistor, and device to measure voltage. There is a 3-minute time limit for each station. You will get a warning at 2 minutes. In the first 2.5 minutes, you may adjust, modify, and start and stop your blades. Within 2.5 minutes of the start of the testing period, you must tell the ES to begin measuring your voltage for 30 seconds. The ES must record the peak voltage that is measured during that period.

The written test will take place after impound. If a lengthier test is used for the event, teams will be called up separately to stations and resume the written portion after testing their build.

As of 2017, the scoring for the building section is calculated as follows:

The maximum possible score on the building section is 50.

As of 2017, the scoring for the test section is calculated as follows:

The maximum possible score on the test section is 50.

The test score and the building score are added together to determine a team's score, with the highest score winning.